But members are unable to settle on a compromise number. 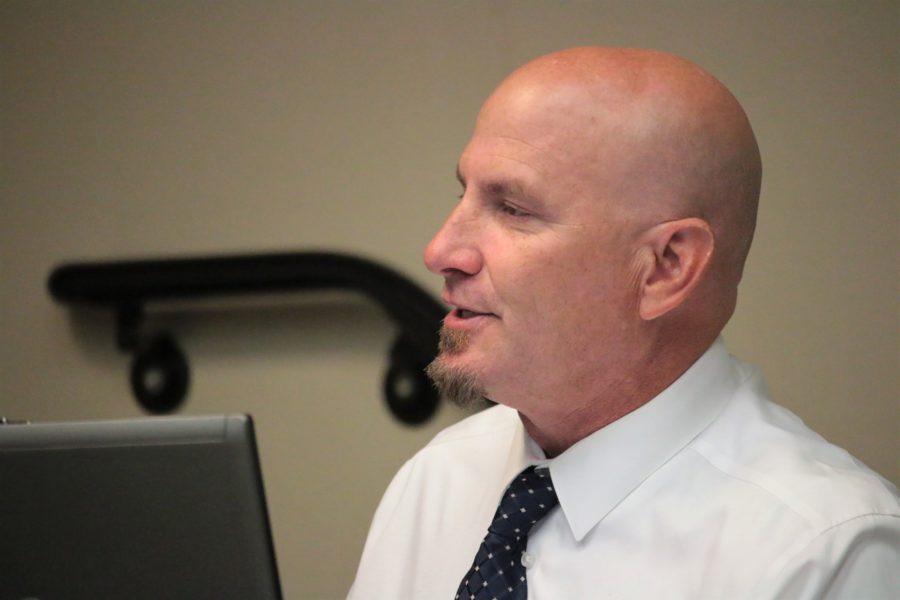 City Manager Bill Avera said staff needed to know the council's preferred number of homes that could be built annually in order to update the Growth Management Plan. Photos by John Chadwell.

Mayor Ignacio Velazquez said he would like to see the number of new market-rate homes capped at 106 annually, not including affordable housing, mixed-use or senior housing.

Councilman Marty Richman said he could not approve fewer than 159 homes.

Councilwoman Carol Lenoir said if the city did not meet the state's demands, it would lose grants.
×

With a 3-2 vote, the Hollister City Council approved a resolution on Aug. 5 to reduce the city’s market-rate housing allocation, but to what amount is still unclear. The vote was split along what has become a normal grouping: Councilmembers Marty Richman, Honor Spencer and Carol Lenoir supported the resolution, and Mayor Ignacio Velazquez and Councilman Rolan Resendiz opposed it. Final approval will go before the council at a later date.

City staff recommended a cap of 133 market-rate units, down from the already approved 244 units to be incorporated into the Growth Management Plan (GMP), which has been in the works for over two years. The council’s view of just how many homes should be built annually ranged from a high of 159 to zero units.

City Manager Bill Avera reminded the council that he originally recommended a 1.5% growth rate that equaled 159 units. Because there was some debate among the council, he offered a compromise of 1.25%, or 133 units. He said the council could come up with whatever number of units it wanted, but that he needed a number in order to move forward with the GMP and eventually bring it back to the council for adoption.

“Under Measure U it was 244 units with 204 being the market-rate units,” Avera reminded the council. “When we proposed the 159 units, that was in line of what our RHNA numbers were.”

In 1969, the state-mandated Regional Housing Need Allocation declared that each city, town or county must plan for the housing needs of residents, regardless of income.

Velazquez said he would like to see a 1% growth rate cap at 106 units, not including affordable housing, mixed-use or senior housing. He said state law only mandates the number of affordable homes that should be built, not market-rate units. The city needed a general plan that works, he said, but that can’t happen until the tax-sharing agreement between the city and county is updated and before more land is annexed into the city.

Richman said he would not accept 106 units, but he would go with 1.5% or a portion of the RHNA for market-rate housing, whichever number was larger.

“We had a proposal for 159 and we had one member who said if he could get it he would go to zero,” Richman said, as he turned to Resendiz and asked if he had misquoted him.

Richman continued and said they were supposed to be compromising, yet the number of units has continued downward from 244 to 106.

“What’s the compromise?” Richman said. “We can’t survive on 1%. New houses pay an average of $60,000 in impact fees. A current home pays absolutely nothing. The mayor and I approved the park master plan and you’re never going to get any of that. I can’t even remember how many millions of dollars it was. Money in the transportation plan is supposed to come from development fees. Folks, you’ve got to wake up. Just because you paid impact fees 35 years ago, the roads they built with it doesn’t last forever.”

Richman went on to say that the last city council, headed by the mayor, tried to push through a growth ordinance that was, in essence, a “moratorium through the back door,” and that the California Department of Housing and Community Development (HCD) told the city it would not be approved nor receive state grants without an approved housing element.

Resendiz said if the council was talking about compromise and his number was zero, then the actual number should be 1.1%. He said he did not appreciate the rhetoric that “we’re hard to work with and if we don’t comply we’re never going to get help with our construction.”

“They haven’t helped us this far and we need to do something drastically to get more support,” he said. “My stance is zero housing [for] this type of development, with exemptions for multi-families, low income and senior housing.”

Councilwoman Lenoir said the state government is serious about the housing crisis and she believed the state will zero in on Hollister. She said this was because the city has a new wastewater treatment facility and the roads are being repaired.

“I give the mayor kudos for the roads all the time, but what I don’t like, do you actually think you can go with zero?” she said. “HCD is going to jump all over that. You’re not just going to lose support from the state, try CDBG grants. Goodbye to that. We live for CDBG grants in this city because we don’t have a lot of funding.”

Velazquez said the public should understand that impact fees don’t pay for existing roads, but only go toward new roads. Councilwoman Spencer disagreed and noted that fees from a development on Chappell Road repaved a portion of Santa Ana Road.

Resident Elia Salinas challenged Resendiz’s assertion that the state doesn’t help the city and said the mayor at one time supported 244 units, at which point he called out, “I did not.”

“Now you guys are trying to compromise and this 1% is not going to work,” Salinas said. “You’ve got to at least meet what the state requires and you should discuss this with the city manager and your attorney. It is 165 units.”

She criticized Resendiz, who voted earlier in the meeting against a resolution to pre-zone 4.69 acres.

“The previous item was to annex property into the city for multi-units,” Salinas said. “I find it ridiculous that you come up here saying you’re against this and you want multi-family, and you just had the opportunity to annex the property so they could build multi-family units. You can’t have zero. The city is a business and you have to make business decisions while cooperating with other government agencies.”