After months of moving through the legal process, the Hollister City Council gave its stamp of approval for a medical cannabis dispensary to Monterey Bay Alternative Medicine. 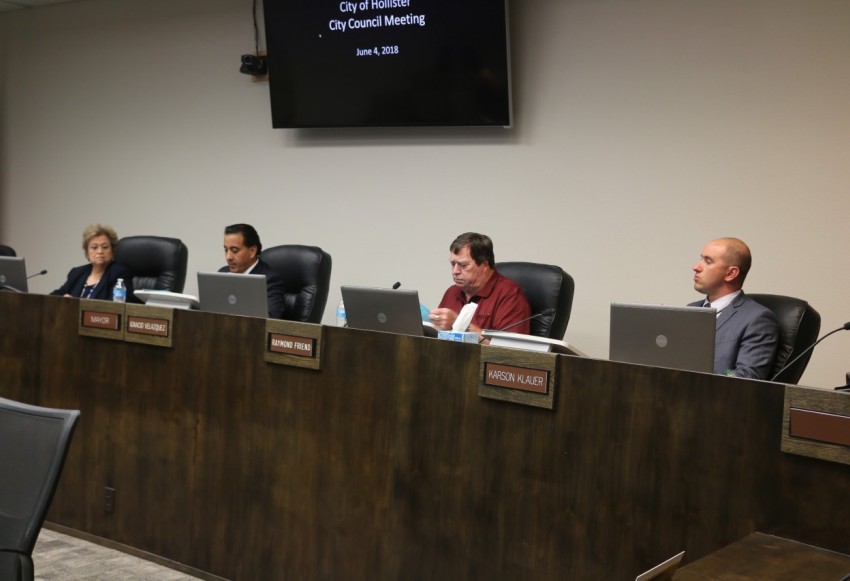 Councilman Karson Klauer recused himself and Jim Gillio was absent for the vote on the dispensary. Photo by John Chadwell. Klauer told BenitoLink by text that he recused himself on advice of legal counsel.

“It goes all the way back to the original selection process a little over a year ago,” Klauer wrote. “There was a dispensary application on Industrial Drive that I had a conflict of interest with because of the property my family member owned.”

Without a word of discussion from the dais, the three council members voted unanimously to approve the resolution to grant Monterey Bay Alternative Medicine a conditional cannabis use permit and development agreement to operate a dispensary at 773 San Felipe Road in Hollister.

The fast-moving agenda item was in stark contrast to past times at bat for cannabis aspirants who hoped to secure one of the two medical marijuana dispensary permits within city limits. On Aug. 14, 2017, besides Monterey Bay Alternative Medicine, five other cannabis companies—Haven, Higher Level of Care, Layla’s Landing, Purple Cross Rx, and Traditional Roots—made their pitches to the council. Numerous cannabis business on the supply chain side of the industry have received city approval since then.

The June 4 approval allows Monterey Bay Alternative Medicine to move ahead in obtaining necessary permits to establish a dispensary and apply for site and architecture review through the Hollister Planning Commission. The approval will expire, though, if it has not been activated by May 2019.

The dispensary is expected to be 2,160 square feet. Its design meets all sensitive-use restrictions under the Hollister Municipal Code. No residents or churches are located within 150 feet of the proposed dispensary and no public or private schools are located within 600 feet. There is an existing building that the applicant will raze in order to bring in a pre-manufactured building.

Speaking for Monterey Bay Alternative Medicine Bay, Gary Coates said at the June 4 council meeting that the company had done several adjustments to the lot in order to maintain the 600-foot restriction as required by the city’s cannabis ordinance.

“We’ll be providing parking, landscaping, cleaning up the front yard area,” Coates said. “We’re also working with your fire department to let them utilize the old structure as a training structure as we go through the process to the point of actual construction.”

Bob Blodgett, co-owner of the new dispensary with Lana Blodgett, told BenitoLink on June 12 that instead of a prefabricated structure announced during the council meeting, an entirely new building will be built with the same square footage, and he hopes to be open for business within 90 days. He expects to have around 10 to 15 employees.

“That would include security on different shifts, bud tenders, manager, accounting, and quality control,” Blodgett said, adding he hopes the county expedites the approval of its cultivation ordinance. Meanwhile, he said the cannabis will come from outside the county.

He commented that after July 1, cannabis will go through far more stringent testing. He said cannabis will be tested for 64 different pesticides.

“Don’t we wish all those fields filled with food that we eat were tested for 64 pesticides,” he said. “Cannabis that’s being sold now and after July 1 is 100 percent clean. Each one of those tests is $500.”

While his two other dispensaries outside of San Benito County can sell to either medical or recreational users, his Hollister dispensary will sell only to those with prescriptions.

“I’m sure down the line that will change because the state has blended both of those,” Blodgett said. “As far as the state is concerned it’s all the same thing. But hardly anyone even has prescriptions anymore. Why should they go out and spend $80 or $100 for a recommendation when you don’t need one?”

Blodgett clarified that very sick people may need heavier doses, which remains under the medical-use standards. His dispensary will be allowed to sell higher dose cannabis, but cannot sell to recreational users. He said 90 percent of the customers at his other dispensaries are recreational users.

On December 19, 2016, the Hollister City Council adopted a cannabis ordinance that amended the chapter titled, “Medical Cannabis Facilities Regulatory Permit,” to “Business Licenses and Regulations” of the municipal code or ordinance. The amended ordinance authorized the city council to issue permits to cannabis facilities within city limits in order to ensure they meet zoning designations for cannabis use. Having reviewed Monterey Bay’s application, city staff was authorized to proceed with permits and agreements pertaining to a medical cannabis dispensary and the company’s April 17, 2017 application was accepted.