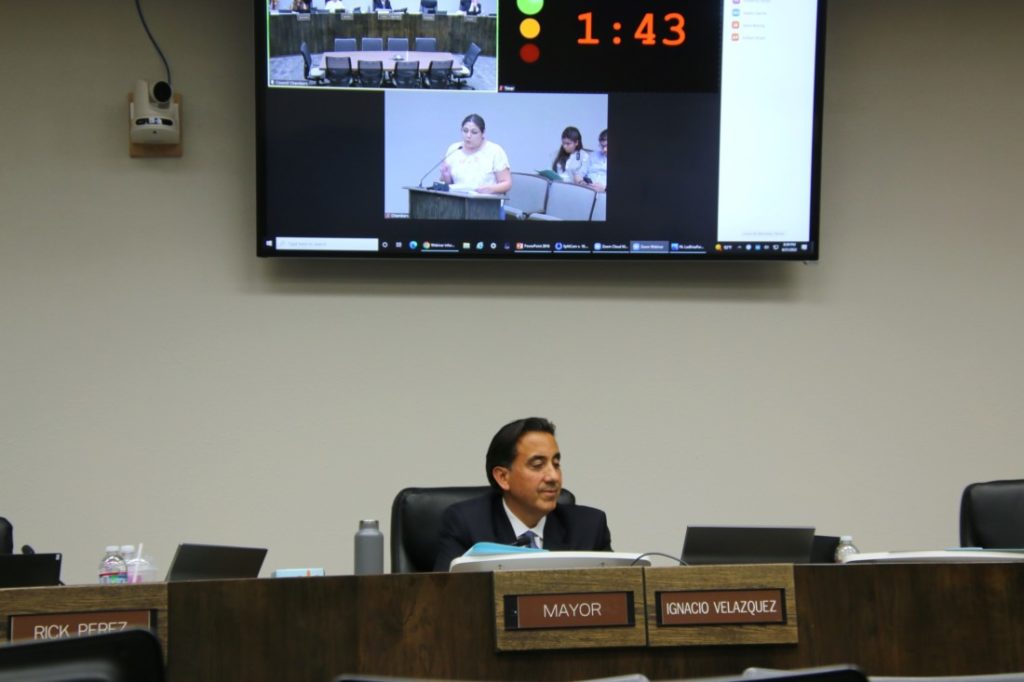 Mayor Ignacio Velazquez listening to resident Celeste Toledo Bocanegra who accused him of being part of the problem after reading from the mayor company's website how it has worked with developers. Photo by John Chadwell. 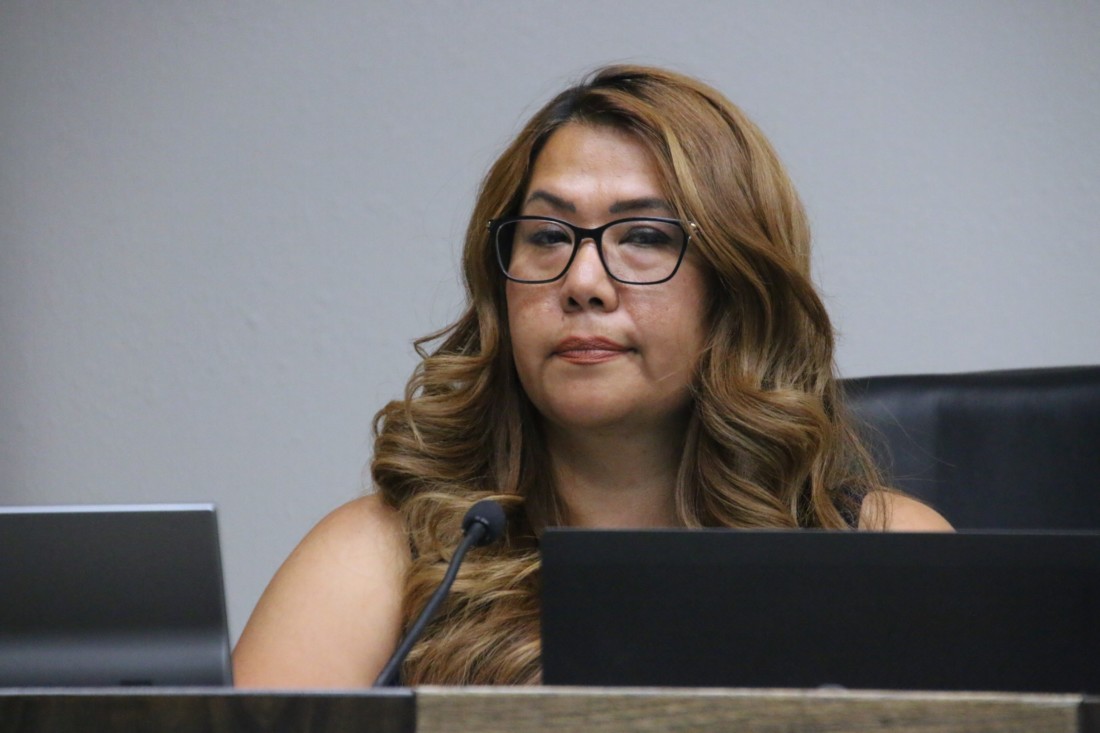 Councilwoman Dolores Morales said the city should not pay lawyers to write an ordinance the city cannot enforce. Photo by John Chadwell. 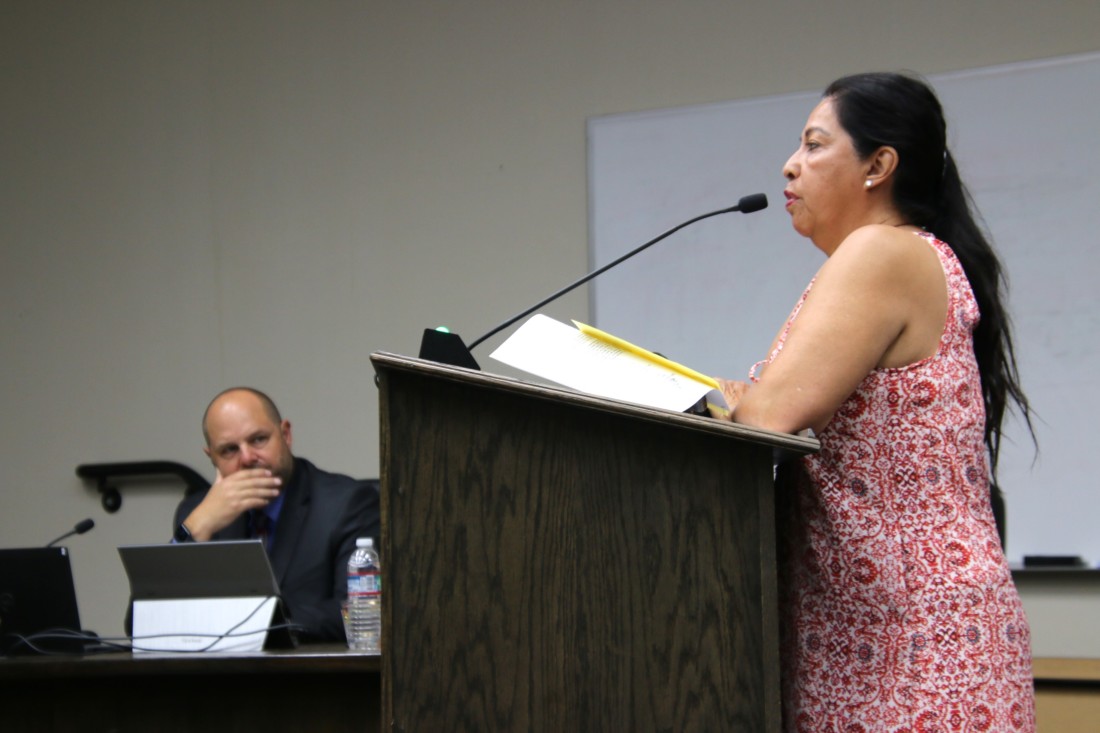 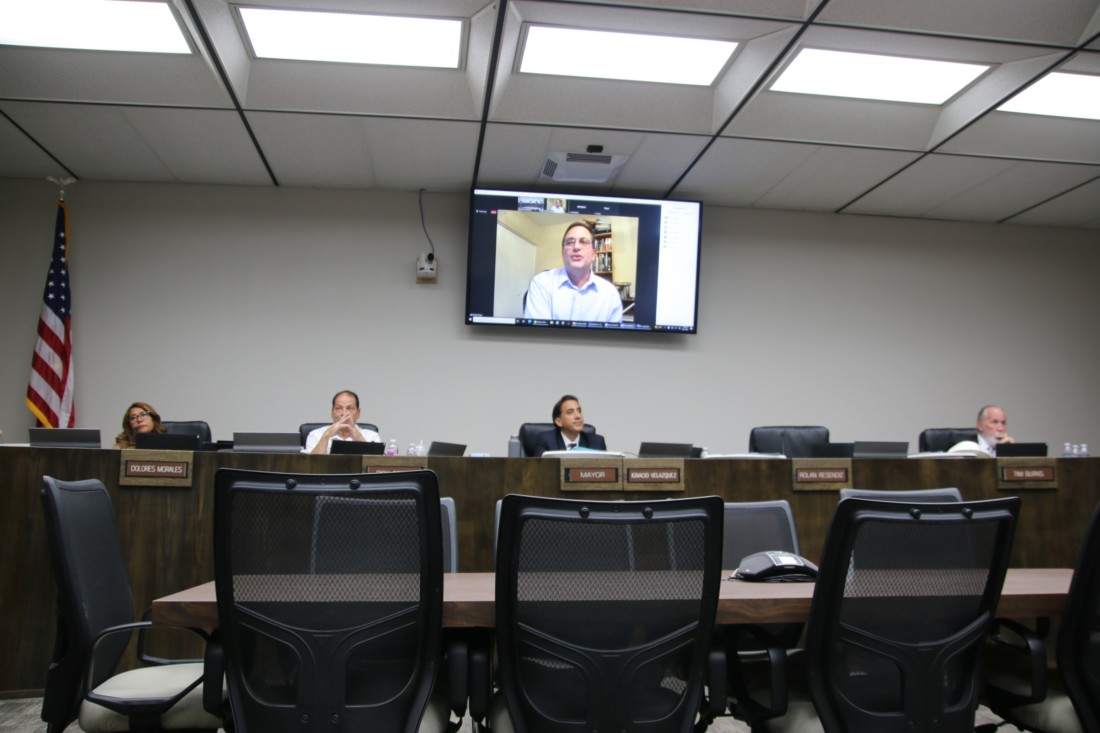 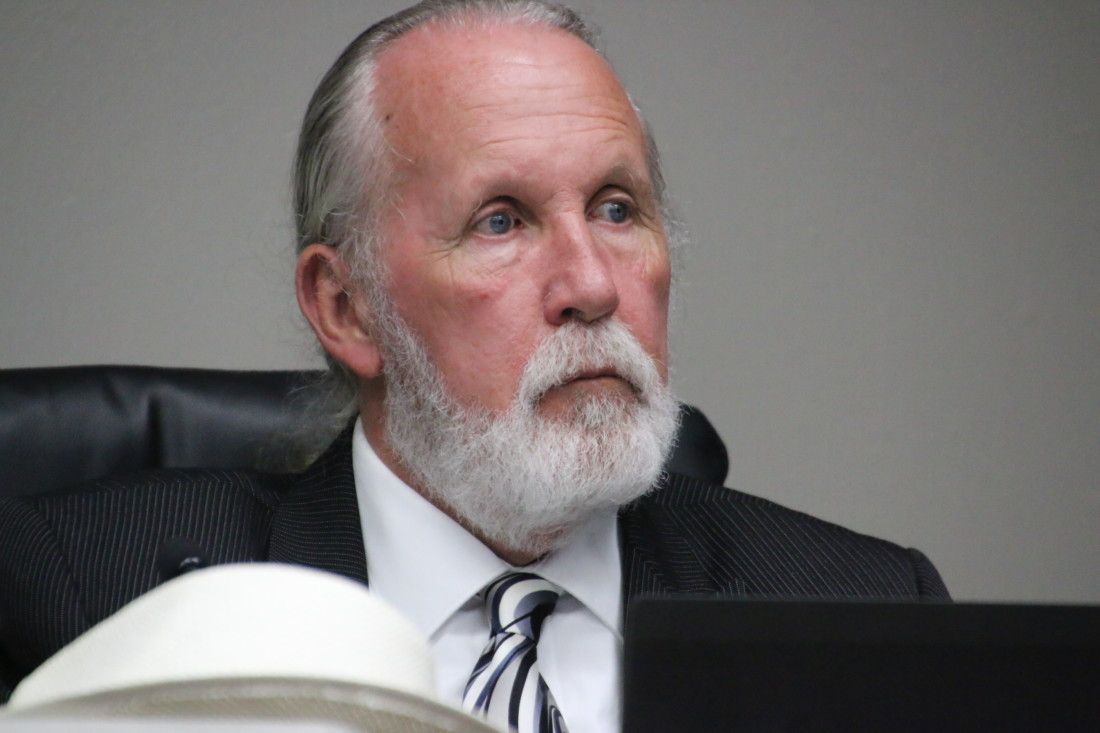 When Tim Burns saw the resolution was going to be defeated he remained silent when the mayor asked for a second to his motion. Photo by John Chadwell. 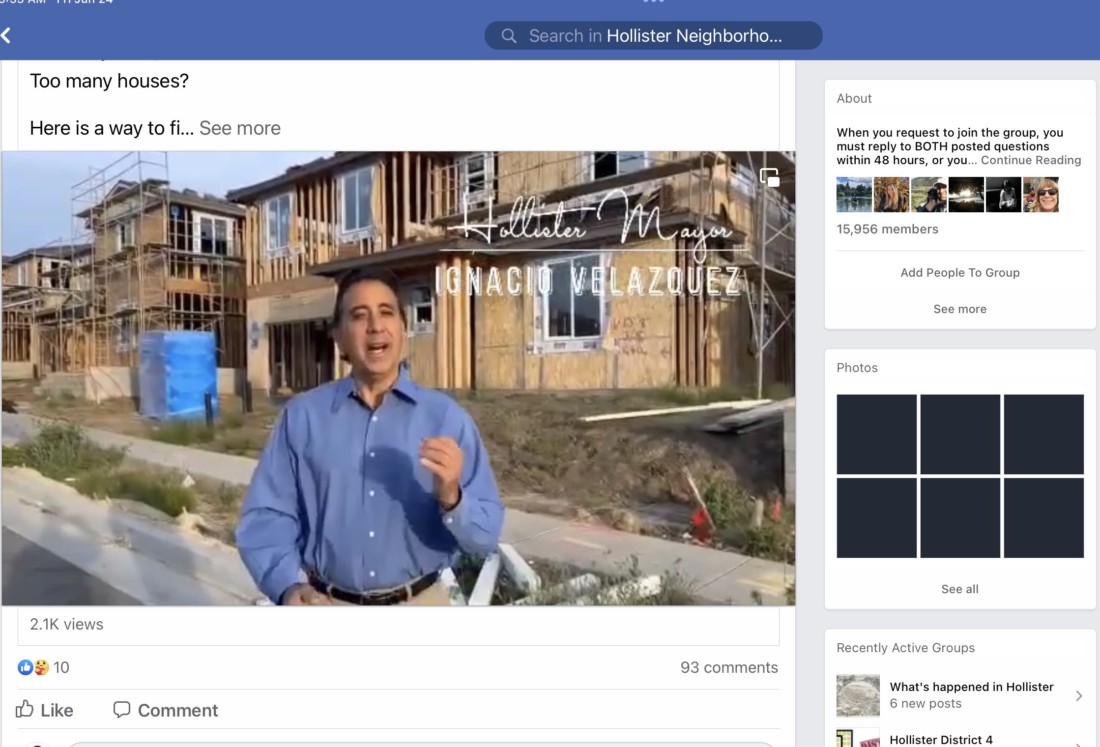 According to the ACLU and the First Amendment Coalition, Mayor Ignacio Velazquez cannot legally block opposing viewpoints if he is speaking as the mayor on Facebook. Screenshot of Velazquez's Facebook post.
×

A revolt, of sorts, took place at the June 21 Hollister City Council meeting when a resolution was brought back after failing to pass June 6 that would amend a city ordinance regarding campaign financing. The most controversial part of it, said Councilwoman Dolores Morales, was that it would fine candidates for perceived infractions, and remove them from office if they had won the seat.

The meeting devolved from a conversation about the ordinance to a heated attack on it and Mayor Ignacio Velazquez.

Morales and Councilmember Rick Perez strongly opposed Velazquez’s and Councilman Tim Burns’ attempt to amend the ordinance, which city staff told them was harsher and more controlling than state laws. When it came time to vote, the mayor’s steadfast ally, Councilman Rolan Resendiz, was absent, and Burns abandoned ship when defeat seemed inevitable.

Between the comments from residents and those of Morales and Perez, it was clear more was going on than amending the city code. When Velazquez asked for a motion to pass the resolution no one stepped up. City Attorney Mary Lerner said it had failed for the lack of a motion.

Velazquez interrupted Lerner to proclaim he would make the motion and then asked for a second. Perez and Morales stared blankly at the audience and Burns remained mute. Lerner said again the motion had failed. When Burns asked her how it might be returned, she told him it could not unless it was substantially different.

The tension in the room was palpable, beginning with Celeste Toledo Bocanegra, who is running for Resendiz’s District 2 seat. She read with an ironic inflection from Velazquez’s company website, “With 25 years in the electrical contracting business, American Electrical Services Inc. has been a name developers can rely on. We specialize in new residential developments.”

“Out of all the people you like to accuse, you are funded by developers,” she said, adding, “You are part of the problem.”

Velazquez responded—though by the rules that he had just read he was not allowed to do so—  that he was proud of his company, adding that his 30 years of experience gave him a unique perspective on “what are good projects and what are bad projects.”

Hollister residents Courtney Evans and Elia Salinas accused Velazquez of blocking people from commenting on his Facebook private groups pages. Evans said that after the district attorney found that the mayor had violated the Brown Act and people’s First Amendment rights, she had hoped he would stop the behavior.

“To silence any person is wrong,” Evans said. “It’s against the law and he needs to be held accountable. The mayor continues to silence the public, to mislead the public, and to blatantly lie.”

David Loy, an attorney with the First Amendment Coalition (which provides BenitoLink with legal guidance through the Institute for Nonprofit News), said Velazquez has the same rights as any citizen to make comments on social media. But he does not have the right, he said, to block public comments and may have committed a violation of people’s First Amendment rights. He said it depends if the mayor is identifying himself on Facebook as a public official, which he has done and continues to do.

“The Fourth Circuit Court of Appeals ruled that the interactive portion of a public official’s Facebook page is a ‘public forum,’ so an official cannot block people from it because of the opinions they hold,” said Vera Eidelman, a staff attorney with the American Civil Liberties Union.

“He’s the mayor, representing the entire council and either you condone it, or you don’t,” Salinas said. “He’s out there saying there’s going to be a city built on Hwy 25. He represents Hollister; he does not represent the county. You’re allowing him to stop future economic development in San Benito County.”

Morales believes Velazquez’s resolution would “suppress or deter future candidates from running.” She asked attorney William Priest, who was participating via Zoom and had worked on the amendment, why it had to be so harsh in its penalties, including removing a council member who had been elected.

“I’m going to be frank with you. Realistically, most campaign finance violations turn out to be unfounded or very small violations,” he said. “Oftentimes, the attorney is going to tell you there’s nothing there.”

Morales asked why the city should pay for something that cannot be enforced. She said the city could not afford to pay fees for an outside attorney or investigator which could quickly amount to thousands of dollars.

Priest suggested another option would be to “not consider the resolution, repeal the existing resolution, and let the Fair Political Practice Commission (FPPC) deal with enforcement and investigations.”

“We’re adding too many rules for nothing,” Perez said. “It doesn’t make sense to burden our staff and the extra finances for nothing.”

Morales said, “The ordinance elevates people who have a lot of money, and they can give whatever they want to their campaigns. It excludes people who are representative of the community.”

“I don’t believe what you just said,” Burns said to Morales. “I’m living proof that you can get up here if you do the hard work. I think you did the hard work, but I don’t think you have to buy a campaign.”

Velazquez said, without providing any proof, that he has witnessed “tens of thousands of dollars being spent by developers and groups that are spreading lies. We just had a campaign where nearly $100,000 was funneled through PACs and different groups.”

He did not respond to BenitoLink’s request for evidence of this claim.

“I’d ask you to rethink the whole ordinance and gauge its value against the chilling impact on grassroots candidates,” she said. “There’s a huge expense and potential for abuse. I don’t understand the necessity of creating and paying for an additional layer of bureaucracy when the FPPC already provides this oversight free of charge.”

Bocanegra said to Velazquez, “You have no right to treat the residents of Hollister as second-class citizens. This is local tyranny and all who vote on this ordinance should be arrested for violation of the voters’ 15th Amendment rights.”

Evans said the language in the ordinance is the mayor’s tactic to scare people. She objected to taxpayer money being spent on an attorney to write a document that limits residents’ ability to get involved in elections. Resident John Casey said after reading the ordinance he did not see any indication of transparency. What he did see, he said, was a “suppression of candidates, punitive measures and potential witch hunts.”

“People need to believe in their government and this ordinance presupposes that local candidates are corrupt and need more oversight than current laws provide,” he said.

The mayor reminded everyone the ordinance was already in place and the meeting’s discussion was about “adding more teeth to some of the rules.” Then he returned to familiar territory, claiming without proof, “The majority of the speakers are involved with a group that were attacking people that were anti-growth. Literally, an organized group that’s spreading misinformation about—”

He ignored her and continued as others joined in shouting at him. “We’ve seen this over and over with big money going into these campaigns to get what they want,” he said. As he continued, he was drowned out by someone shouting several times, “Prove it.”

When Velasquez asked for the motion, Burns said, “It’s pretty clear this is going to end in a deadlock. My recommendation [and motion] is to pull it and bring it back.”

Velasquez scolded the audience, telling them they were being disruptive, and that they were the problem.

Velazquez provided the second to Burns’ motion. Perez and Morales voted against it and the motion failed. Then the mayor asked for a new motion for the resolution.

There was only dead silence. The motion failed.