Majority of members unsupportive of urgency ordinance put forth by Mayor Velazquez. 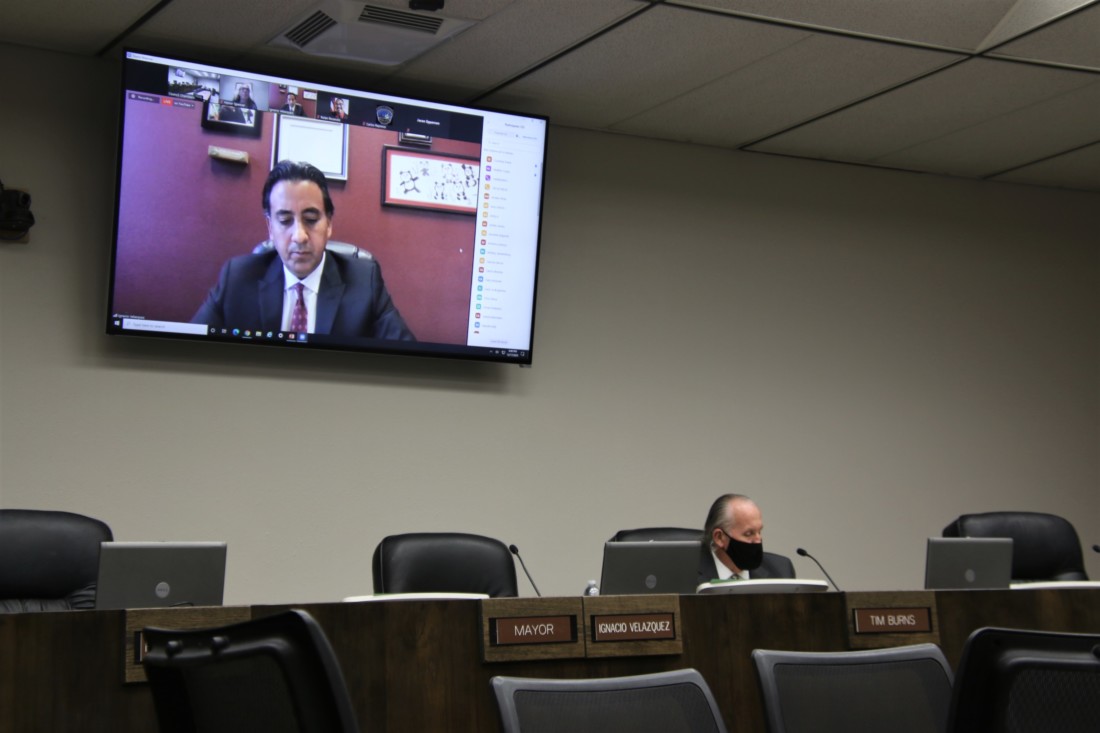 Hollister Mayor Ignacio Velazquez on Zoom and Councilman Tim Burns in the meeting chambers on Dec. 17. Photo by John Chadwell. 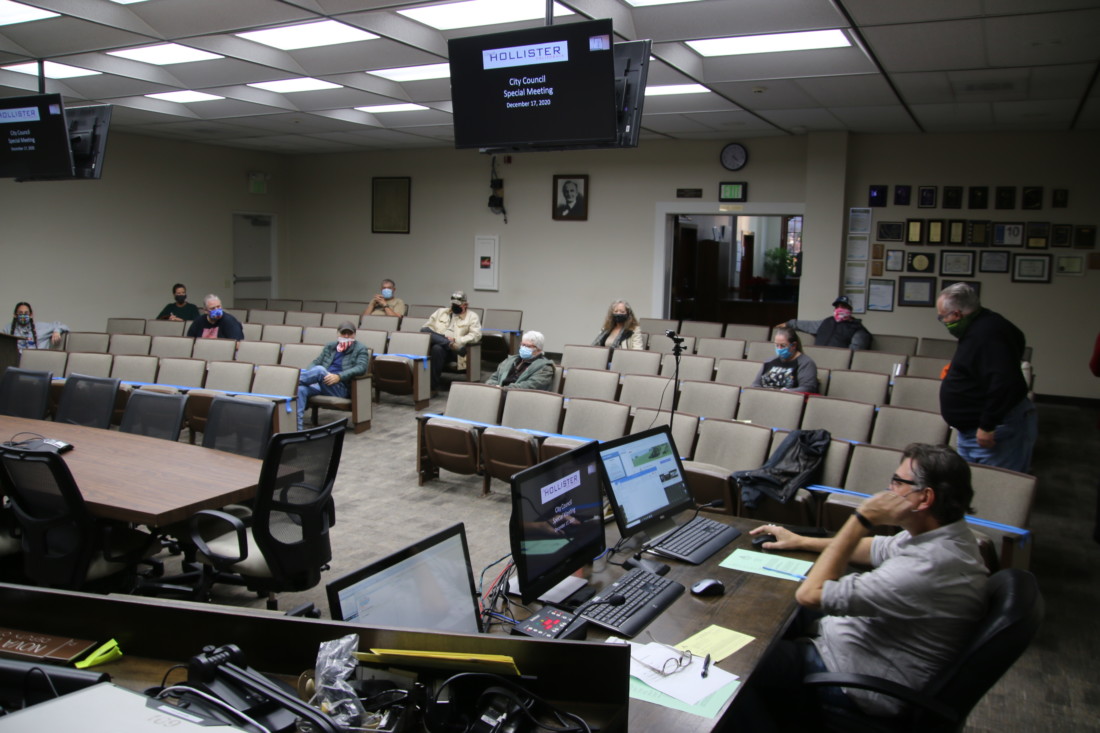 Only 13 people were allowed inside City Hall during the meeting due to COVID-19 restrictions. They applauded throughout the meeting at public comments. Photo by John Chadwell. 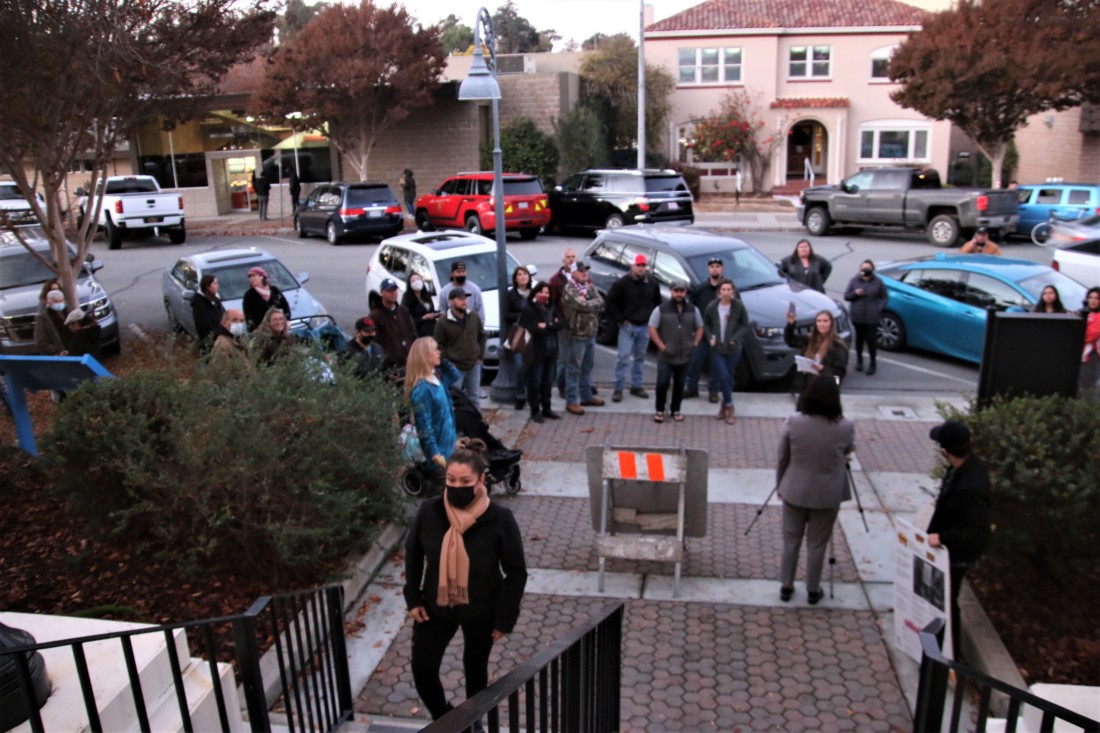 Those who could not enter City Hall stood outside for the three-hour meeting. Many spoke during public comment and cheered when the ordinance was defeated. Photo by John Chadwell. 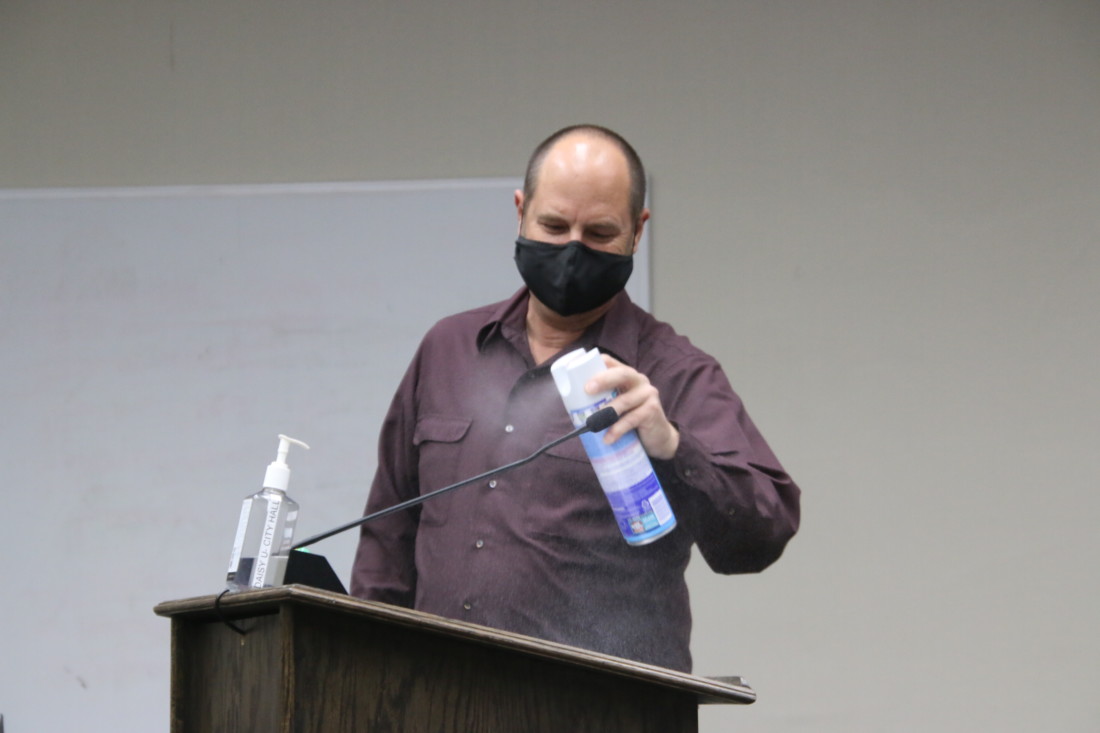 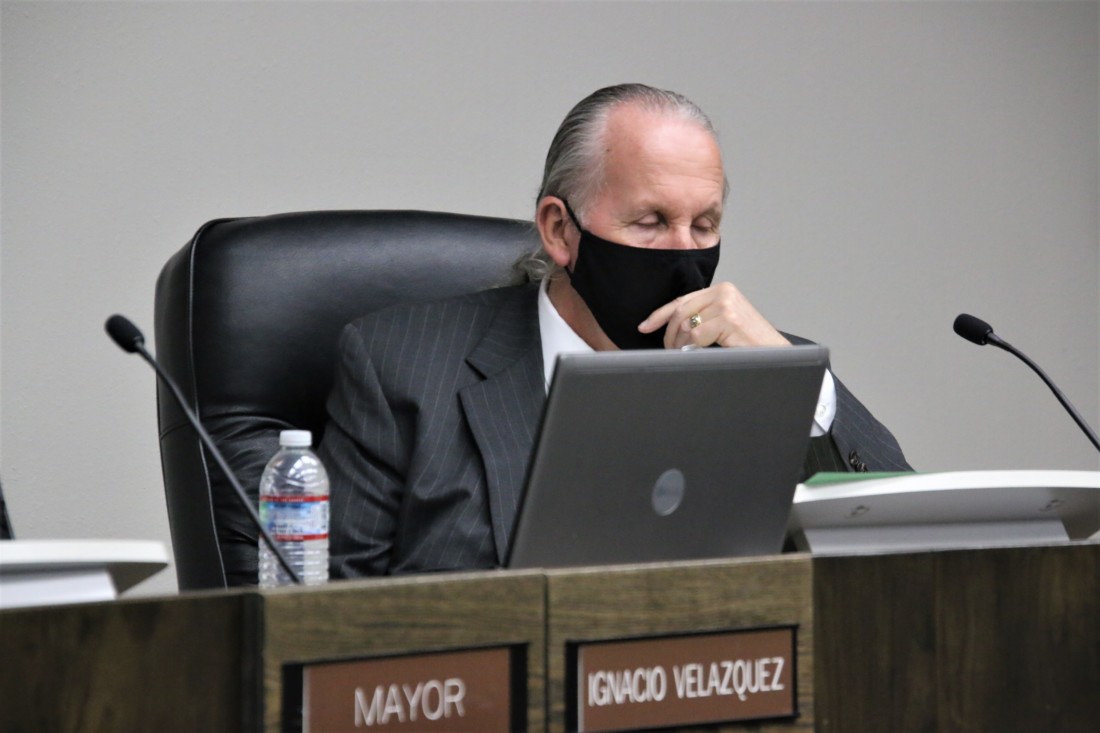 Councilman Tim Burns asked how many businesses were defying the mask ordinance. Photo by John Chadwell. 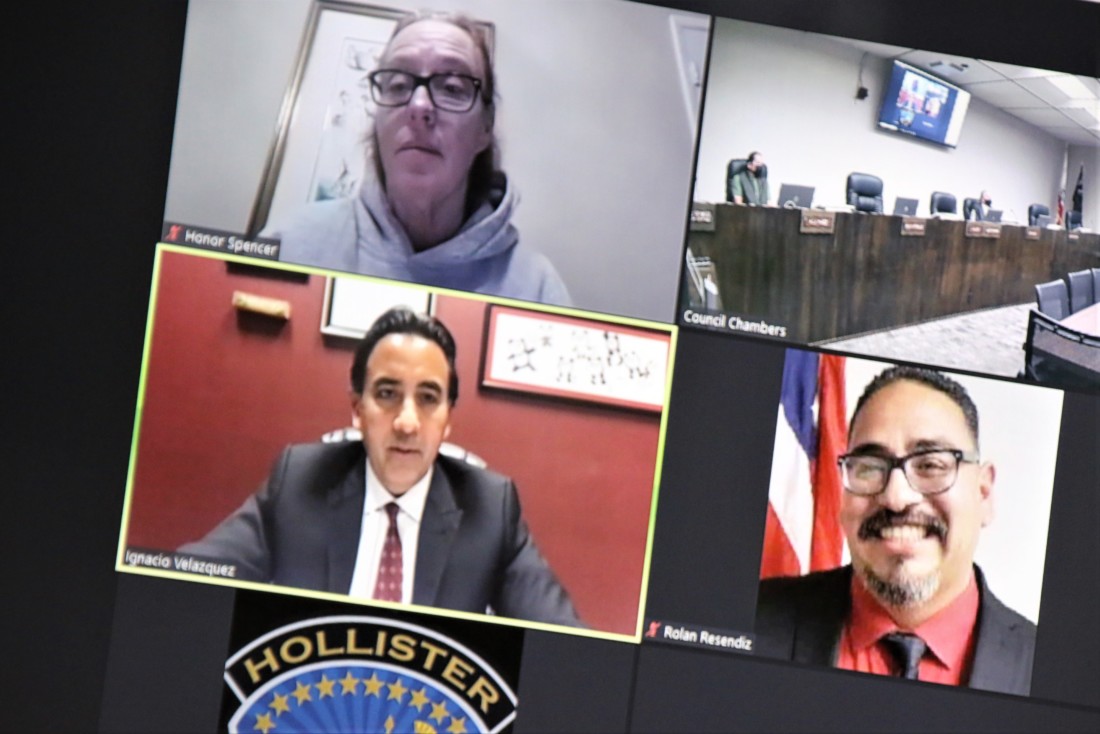 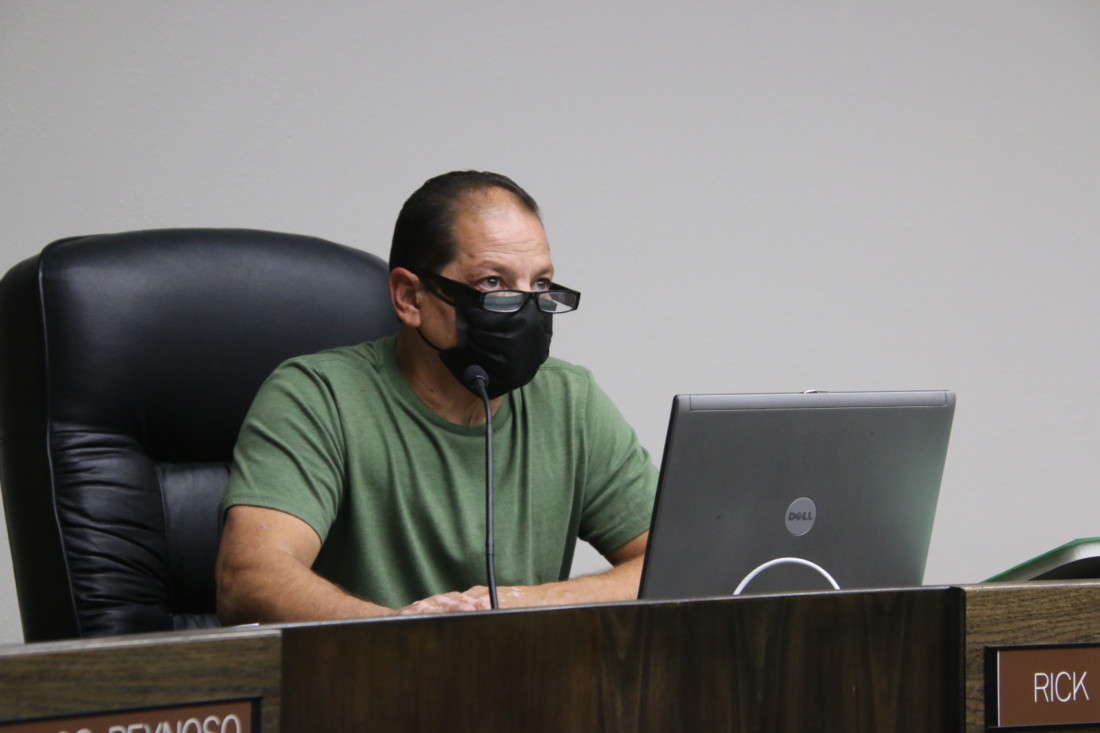 Councilman Rick Perez said the resolution came too quickly and there were better solutions. Photo by John Chadwell. 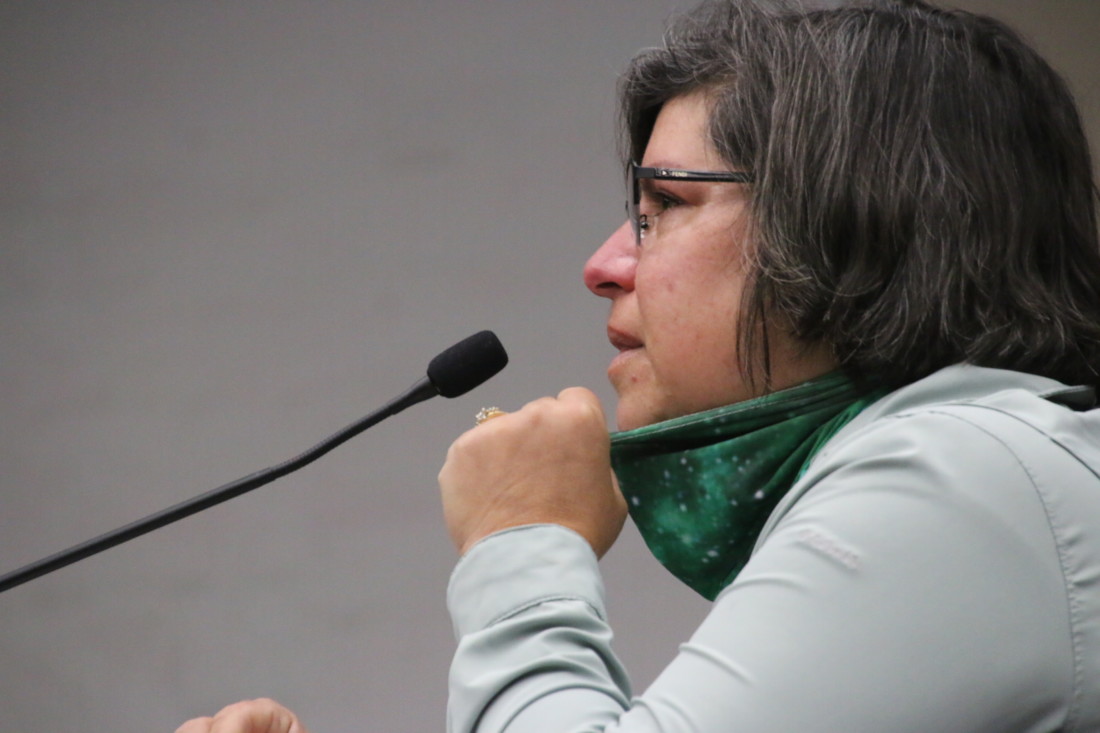 When Amber Henderson tried to explain why she had difficulty speaking with a mask for medical reasons, the mayor demanded that she put her mask on. Photo by John Chadwell. 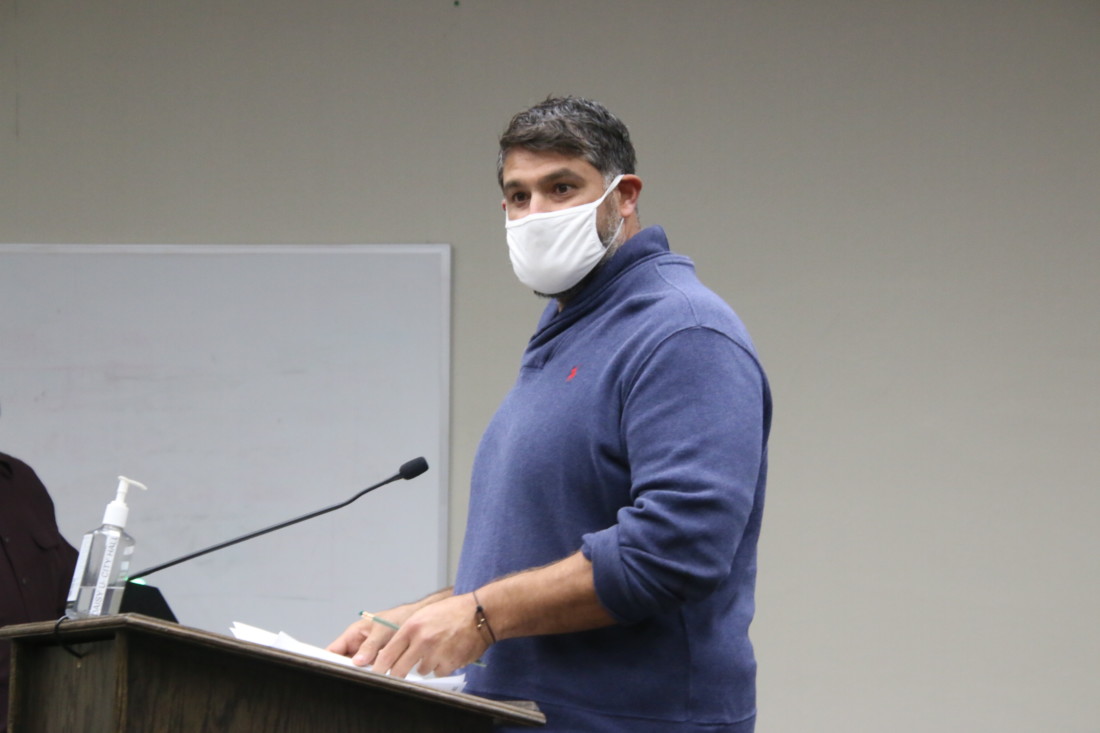 Roy Sims, a former councilman, said the council needed to show more compassion and spoke of the number of students failing this year because they were forced to stay at home. Photo by John Chadwell.
×

At a special meeting on Dec. 17, The Hollister City Council voted 3-2 against an urgency ordinance that would have allowed the city to issue citations against individuals and businesses out of compliance with the state’s regional stay-at-home order. The ordinance, sponsored by Mayor Ignacio Velazquez, included a fine of $1,000 per day for violations, in addition to the ability to revoke business licenses.

The ordinance would have taken effect immediately, but as the meeting began it became apparent from opening questions that it was in trouble.

Newly elected Councilman Tim Burns said he read the current mask ordinance, which passed on Sept. 21, and wanted to know what had changed to warrant the higher fines and loss of business licenses. City Manager Brett Miller said it was because of the increasing numbers of positive COVID-19 tests and that a “number of businesses had been defying the state guidance.”

As of Dec. 17, 2,687 people have tested positive for COVID-19 in San Benito County since February. Four hundred fifty are active patients, 2,214 have recovered and 23 have died. The county’s current positivity rate is 13.9%, and the San Joaquin Valley Region’s ICU availability is 0.7%.

When Burns asked how many businesses were currently defying the city’s mask ordinance, Miller said none. The city, Miller said, issued a total of 15 administrative citations to individuals for not wearing masks over the last couple weeks at only two businesses—Whiskey Creek Saloon and San Benito Billiards. Miller also said that even if city code enforcement did cite individuals or businesses under the proposed ordinance, there was no assurance the San Benito County District Attorney’s Office would support it.

Councilwoman Honor Spencer set the tone for what was to follow in public comments.

“Let’s make this clear, we’ve got businesses who are barely scraping by. They’re trying to make a living, trying to feed their families. The city is going to fine them $1,000 a day, and if they don’t comply, we’re not going to pull their license but we’re going to revoke it,” she said, “which means we’re going to take their license away. They cannot get a license again. And if they have a liquor license, they lose that too and cannot get it again.”

Spencer continued, “So, we’re going to try to implement an ordinance to literally kill our small businesses in the city of Hollister.”

Public comments went on for nearly two and a half hours. A number of salon owners and employees said they had obeyed all cleaning protocols far and above what was required only to be shut down twice. Others who spoke wondered why Target and Safeway remain operating at full capacity while small businesses were either closed or forced to cut back services. Multiple speakers said the city had no data to justify limiting restaurants to take-out orders only, a view expressed in similar comments made by former San Juan Bautista Councilman Dan De Vries at a Dec. 15 meeting on reopening outdoor dining.

“People have a lack of respect for city officials,” said new Councilman Rick Perez in closing comments before the vote, referring to those who defied the mask ordinance. “Can we blame them?” He addressed his fellow councilmembers: “How have we represented our community? I think we can resolve this situation by coming together, being creative, and being safe. We’ve got to be safe, and we’ve got to make some money.”

Velazquez said people ignore the rules because the city cannot enforce them. He said that at the beginning of the pandemic, the city moved quickly to do everything it could to save lives and businesses.

“We worked hard to prepare for it, but you know what, the federal government blew it,” he said. “They should have gotten the testing ready and all the resources we needed to fight this. We could have beat this months ago.”

Velazquez continued, “The state didn’t do a good job either. You know I’m not a great fan of the state, and had I had the ability to do things, it would have been much different. But here we are and we’ve got a problem.”

Velazquez placed the blame for the dramatic increase in local positive COVID-19 cases on large gatherings.

When Velazquez asked for a motion to vote on the ordinance there was a long silence from members on the dias and on Zoom. He made the motion himself and Councilman Rolan Resendiz seconded it. Then the mayor asked for a roll call vote, and when it failed to pass, he thanked the public for participating.