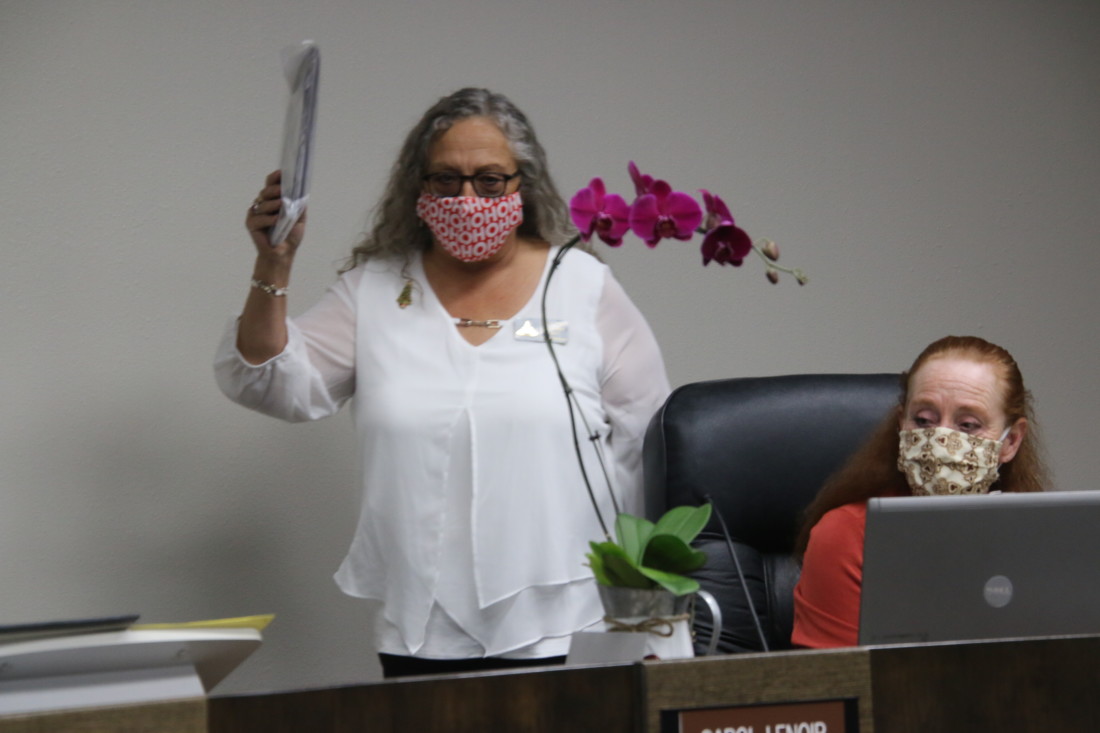 The Dec. 14 Hollister City Council meeting agenda was one of goodbyes and welcomes as Councilwoman Carol Lenoir bid farewell after 32 years of service to the city and one term on the dias. Two new members, Rick Perez for District 1 and Tim Burns for District 4, were sworn into office, while Mayor Ignacio Velazquez was sworn in for a fifth term.

After receiving the obligatory plaque from City Manager Brett Miller for her years of service, Lenoir not only took the opportunity to thank city employees, but also said her time on the council was not what she had expected and was the reason for leaving after only one term.

“It’s official, I’m not politician material,” she said. “I could handle business, but I could not handle the politics.”

Over the past two years, relations between Lenoir, the late Marty Richman and Councilwoman Honor Spencer—who formed a unified voting block in opposition to Velazquez and Councilman Rolan Resendiz—were often contentious in City Hall, and more than a little hostile on social media, with accusations that Spencer and Lenoir colluded with land developers. There were moves on each side to censure those on the other side.

“Posthumously, I thank Marty Richman for his vast knowledge and ethics,” Lenoir said. “My lights dimmed a little when he passed, but I try to remember the laughs we had. He was a good guy to the end.”

She turned to Spencer, seated a few feet away, telling her it had been a pleasure meeting her and working with her on the council. “I want folks to know how hard you work representing them. I sense you have a connection with the employees as I see you are consistently concerned for their welfare.”

Lenoir said she could speak about the troubles on the council, but left it with, “Let’s just say I didn’t anticipate all of that. Live and learn. I did not like the rift in the organization.”

After thanking numerous community members, she ended by making a couple recommendations before departing.

“I would like the city to hold the line on county development in your sphere of influence,” she said, adding, “I would like more women to run for office in the county and the city.”

She continued, “Rick [Perez], good luck to you and to Tim [Burns]. Rick, I’ve enjoyed our conversations and I’m hopeful for you. It’s a tough job, but you’ve got a good staff to help educate you. To Hollister I want to say, I have always loved you and I have many fond memories having served you for 32 years. It’s time for me to take a break. I know you will find your way. Look to your hearts and love one another.”

“Carol, you and Marty made my time on the council amazing,” she said. “You were my mentors first and you became friends. You’ve guided me and you still do. I’m looking forward to working with Mr. Perez and Mr. Burns. I’ve known Mr. Perez and his son for many years, but it’s with sadness I have to say goodbye to you. You don’t know how much I want to jump up and give you the biggest hug. This is not goodbye, I know where you live.”

When it came to Resendiz’s comments, he was polite and thanked Lenoir for her dedicated life to public service. Velazquez said, “Thank you for your service to the city,” and moved on to welcoming Burns and Perez as new councilmembers.

City Clerk Christine Black swore them in individually, and then swore Velazquez in for his fifth term as mayor over Zoom, and had them sign the documents of office. After the signing, Perez said he was honored to be voted into office.

Burns said he looked forward to working with the mayor, the council, and the city administration.

Velazquez closed the meeting and said, “I’m going to allow you guys to make your first motions as new councilmembers to adjourn and second.”

With that, Perez made his first the motion to adjourn and Burns seconded it.