Her lawyer says he has yet to receive and analyze audio-video and phone records. 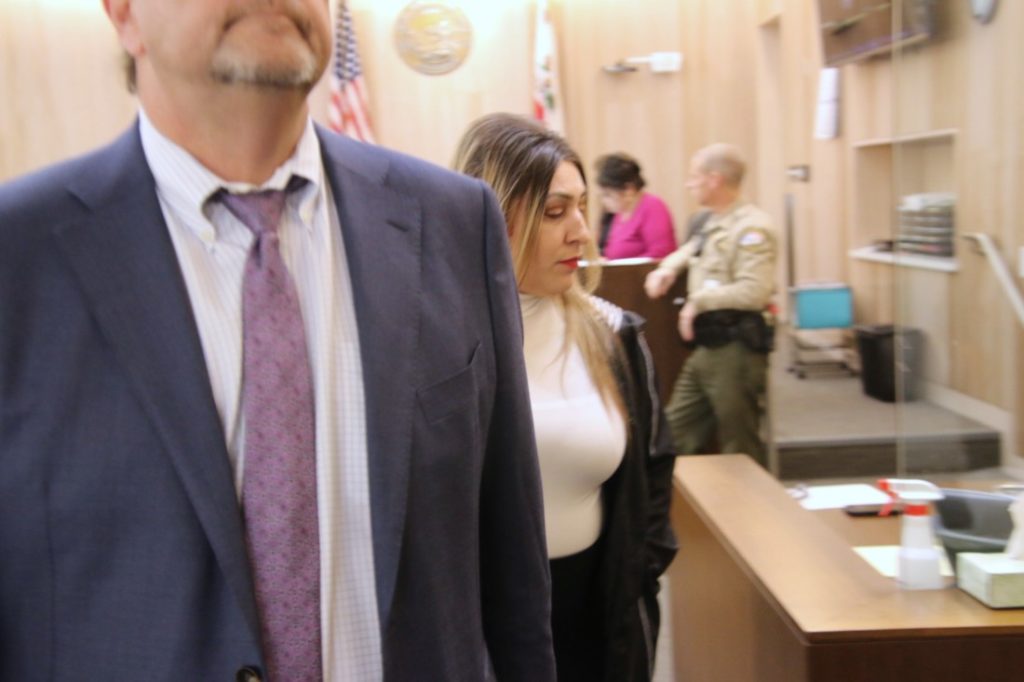 Jessica Diane Chacon Aviles leaves courtroom with her attorney after the hearing delayed until February. Photo by John Chadwell.
×

Jessica Diane Chacon Aviles appeared before Superior Court Judge Thomas Breen on Jan. 19 to set a preliminary hearing on a felony hit and run charge stemming from a November 2020 incident which resulted in the death of Hollister resident Nikko Espinoza. She was arrested May 12, 2021.

The courtroom gallery was filled with family and friends of Espinoza, as Chacon Aviles’ lawyer, Roland Soltesz, asked and received a continuance to Feb. 23. Soltesz said he was asking for the continuance because he had not yet received audio-video evidence or a download of cell phone records.

According to the complaint, Chacon Aviles was allegedly “driving a vehicle involved in an accident resulting in death to another person and failed to immediately stop and give his or her current residence address to the person struck and to a traffic or police officer at the scene of the accident, and/or further failed to provide reasonable assistance to a person injured in the accident.”

District Attorney Joel Buckingham, who will be prosecuting the case, told BenioLink that Chacon Aviles was charged on Nov. 17, 2022.

“She is out on her own recognizance as she had been out quite a while before the case being charged,” he said.

Espinoza was found unconscious with a head injury after apparently falling off a moving vehicle around 2:09 a.m. on East Street. He died later that day.

Hollister police arrested Diane Chacon Aviles in connection with the case, but she was not charged at that time. After the continuance, she hurried out of the court with her lawyer, followed by the family and friends of Espinoza, many of whom had his picture and name on their shirts.

In July, his mother, Rafaela Banuelos, told BenitoLink, “We want the truth.” Outside the courthouse Jan. 19, she criticized the police investigation, saying police knew who the driver was all along and “never went to look for her.”

“They refused to knock door by door in the location to see if there was any surveillance available,” another woman claimed. “The police officers refused to go there because it’s supposedly a gang-related area.”

Hollister Police Chief Carlos Reynoso responded to the accusations, saying investigators went to the area and looked for surveillance cameras.

“We knocked on doors and were looking for her soon after, but she was hiding,” he said. “Later, we had substantial evidence that showed what might have happened and felt we had enough evidence to make an arrest.”

He added, “To insinuate that our detectives and our officers didn’t do everything that we could is disingenuous and it’s not accurate. I understand that they’re going through difficult times in the loss of a loved one but the police department did everything we could to solve that case.”

John Chadwell is a BenitoLink reporter and an author. He has many years' experience as a freelance photojournalist, copywriter, ghostwriter, scriptwriter, and novelist. He is a former U.S. Navy Combat Photojournalist and is an award-winning writer who has worked for magazine, newspapers, radio and television. He has a BA in Journalism and Mass Communications from Chapman University and underwent graduate studies at USC Cinema School. John has worked as a script doctor and his own script, God's Club, was released as a motion picture in 2016. He has also written eight novels, ranging from science fiction to true crime, which are sold on Amazon. To contact John Chadwell, send an email to: [email protected]olink.com.