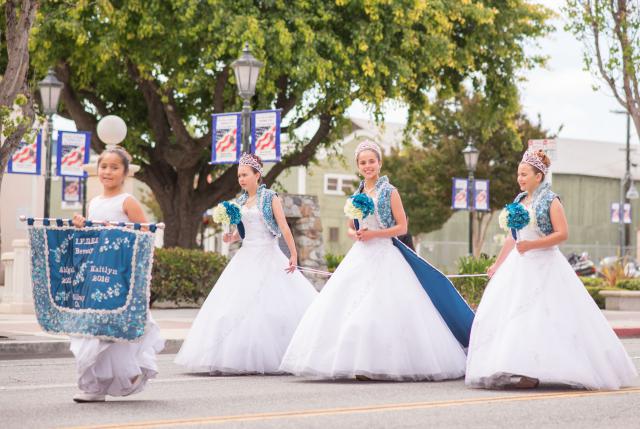 The Portuguese-American community in Hollister on Sunday, May 24,celebrated a 700-year-old cultural tradition honoring Queen Isabel’s spirit of compassion for the poor, with a parade as well as a free meal for the community.

Sunday morning’s Portuguese Festival in Hollister began with a procession from the S.D.E.S Hall to the Sacred Heart Catholic Church. Community members attended mass together and then returned to the hall where they released doves, a symbol of peace, and fed community members sopa, a traditional Portuguese soup of cabbage and beef.

Presiding over the festivities were the newly-crowned 2015-2016 queens of the S.D.E.S. Hall, 7-year-old Alyssa Silveira and 16-year-old Mykayla Dutra. The two young women were chosen to represent the hall for the year, and began their official reign by marching in the procession to the church along with queens from surrounding Portuguese-American communities in the south Bay Area.

According to Hollister S.D.E.S Hall Board of Directors President Mark Lema, the local festival is, “a continuation of what they do in Portugal to honor Queen Isabel. She would feed the people once a year and give a crown to someone to show that no one was better than another, not even royalty.”

The tradition, known officially as the Feast of the Holy Spirit or the Festa Do Espirito Santo, dates back to Holy Queen Isabel, who lived and reigned during the early fourteenth century. The festival also coincides with the Catholic holy day of Pentecost Sunday, a date that commemorates the gift of the Holy Spirit.

Queen Isabel was known for her compassion for the poor and was a strong advocate for peace. Pope Urban VIII canonized her as an official Catholic Saint in 1625.

The events of Festa Do Espirito Santo come from a legend surrounding Queen Isabel. The narrative states that during a time of famine in Portugal, Isabel prayed to the Holy Spirit for relief for her people, vowing that she would give her crown to the church if her people could be spared from hunger. As she left the church, she saw ships coming into the harbor loaded with wheat and grain.

For 700 years, Portuguese communities across the United States and world have celebrated this event. The tradition continues today planned by the official leadership of the Portuguese-American community in Hollister, the directors of the S.D.E.S. Hall, known in Portuguese as The Sociedade do Divino Espirito Santo.

Portuguese halls are a national presence that is the official face and gathering place for the Portuguese-American communities in many cities. Portuguese Halls exist in most communities across the United States.

The halls provide a space for members of Portuguese descent to come together, honor traditions from Portugal as well as fundraise for scholarships, children’ programs and other charitable endeavors throughout the year.

The halls also crown queens each year to represent their community during visits to halls in other cities. In fact the Portuguese Festival in Hollister on Sunday Morning followed the coronation on Saturday evening of the new 2015-2016 queens.

Halls typically select two queens, according to Lema. The first, known as the “Big Queen,” is a high school age teenager who has completed the Catholic Sacrament of Confirmation. The second, known as the “Little Queen,” is an elementary school age girl who has completed the Catholic Sacrament of First Communion. Prospective queens must submit an application and the board of directors decides which girls are chosen.

This year, Dutra, a junior at San Benito High School, and Silveira, who attends Southside School, were chosen. Both girls were allowed to select two friends as attendants, known as Side Maids, to stand by their side during official duties.

“It is actually really fun,” Mykayla said when asked for her thoughts on becoming the Big Queen. “You get to meet new people and visit new places.”

Alyssa said she was excited and nervous about becoming the Little Queen.

“She has been waiting to do this for a while,” Alyssa’s mom, Lubelia Silveira, confirmed.

Mykayla and Alyssa were joined during Sunday’s parade by the 2014-2015 Hollister queens, as well as queens both big and little representing halls in Los Banos, Gilroy, Mountain View, San Jose and other communities.

Family members accompanied the queens from all communities during the procession to the church on Sunday morning, as well as the San Benito High School marching band and color guard.

The Portuguese marching band, Nova Alianca, also participated in Sunday’s parade, and provided a concert in the afternoon when community members had returned to the hall. Festivities concluded with an auction and dance on Sunday afternoon.