At some point all infrastructure needs major upgrades - we are way beyond that. 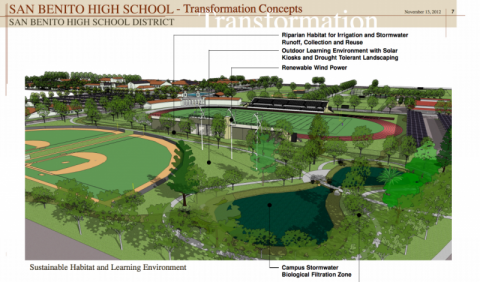 I’ve decided to support Measure G, the San Benito High School capital improvement bond and I’m writing to tell you why I made that decision

The primary reason is because I want the school to do a better job of educating and protecting the students. To get a good product you have to give the workmen good tools. This is not a reward for past performance, which has not been nearly good enough in my estimation, but the bond is an investment in better future performance and safety. As the new, improved, facilities come online the community has a right to expect much better academic results.

If you are trying to learn in a crowded classroom on a busy campus the physical environment is critically important; noise, space, temperature, ventilation, and lighting all have an impact and getting it right makes the teachers more effective. The cost of capital improvement is peanuts compared to the cost of more teachers to offset serious deficiencies in the physical plant.

Access and safety are always top issues, I do not believe in pampering students, but to have a major structure, the vocational building, which does not meet current seismic standards is just not acceptable in this earthquake prone area. As far as access goes, students with disabilities must have accommodations that will help them mainstream. The social and educational environment can result in greater independence as adults – they have it tough enough.

Unfortunately, there are some crazies out there, and even within some school populations, who see students as convenient targets; therefore, we also have to protect against that threat, which means classrooms capable of being effectively locked down should the necessity arrive.

The board has assured the public that they are not going to overspend on athletic facilities, which was my major concern. I have the word of individual trustees that they will keep it under 10% of the total.

They also made a good argument about a second high school demonstrating that you would still have to deal with the major deficiencies that currently exist, because of safety. We cannot have everyone running to a shiny new school, which is what will happen if the difference between the two schools becomes too great. Even if we approved a new school today for many hundreds of millions of dollars, and that would be difficult, it will be a long time before it is in operation. We will have to deal with that issue soon if growth projections are accurate, but it has little to do with these fixes.

That’s it folks, I’m voting yes based on cold, hard facts and an investment in the future. No arguments about hurt feelings, self-esteem, pennies a day, or any of usual soft-soap – at some point all infrastructure needs major upgrades; on my way to the trustee’s meeting I did a little unescorted peeking around both outside and inside the facilities, believe me we are way beyond that.