3-2 vote approves pre-zoning for a project on Buena Vista Road. 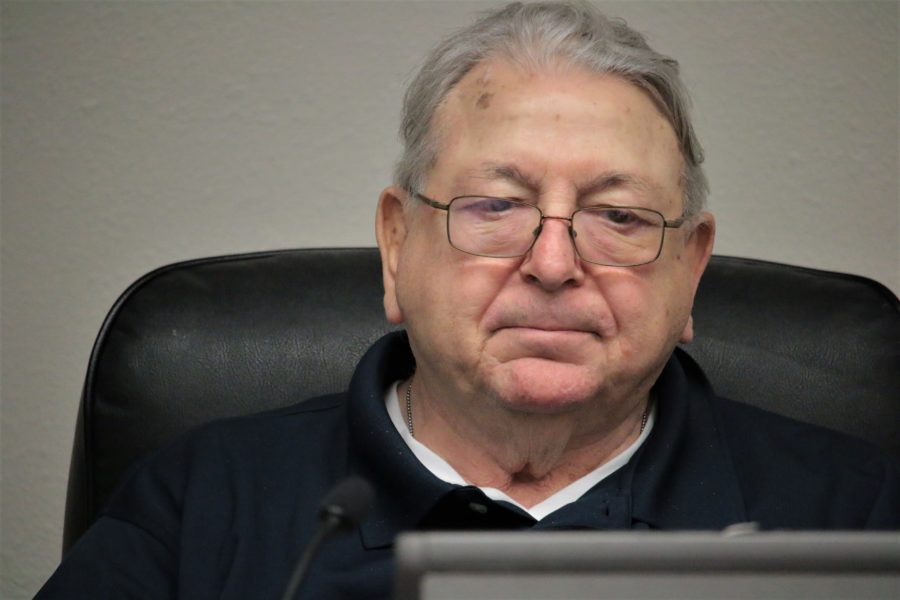 At the Aug. 19 Hollister City Council meeting, Councilman Marty Richman said that Mayor Ignacio Velazquez would rather argue about the General Plan than do something about it. Photos by John Chadwell.

Local developer Hugh Bikle said if the development is built it will generate more than $16 million in taxes and fees for the city.

Mayor Ignacio Velazquez said that he was not against growth, and that he has asked for the General Plan to be changed numerous times.

Realtor Marilyn Ferreira said council members' egos are threatening people who have paid hundreds of thousands of dollars to bring the project before the council.

Councilman Rolan Resendiz said the city is not presently in a position to annex developments.
×

The Aug. 19 Hollister City Council meeting was filled with animosity and personal attacks, even when it came to approving two agenda items related to a medium-density housing development at 1070 Buena Vista Road, across the street from Calaveras Elementary School.

Splitting along ideological lines, in a 3-2 vote the council approved resolutions related to the pre-zoning and eventual annexing of the 9.1-acre project. Mayor Ignacio Velazquez and Councilman Rolan Resendiz opposed the items, and council members Marty Richman, Honor Spencer and Carol Lenoir supported them.

Local developer Hugh Bikle has attempted to work with the city ever since he first received approval in August 2015 to pre-zone the property. The Hollister Planning Commission determined the pre-zoning request complied with the city’s General Plan at a June 27 meeting, and recommended the City Council adopt both resolutions.

The zoning district allows for eight to 12 units per acre, or 72 to 109 units for the entire project if it were to move forward, according to Eva Kelly, assistant planner with the Hollister Planning Department. She explained that the project had yet to receive approval from the San Benito County Local Agency Formation Commission (LAFCO) and would be subject to the current tax-sharing agreement between the city and San Benito County.

Under that agreement, the city and county get 11-12% of the property tax, while the schools get the rest, Velazquez explained to BenitoLink. Of that 11-12%, he said the city only receives 3%, or less than $200 on a $500,000 home. When the agreement comes up for renewal, Velazquez said he would like the city to get 75% on all homes annexed into the city, and 25% on homes built within one mile of city limits.

Bikle told the council that the site was a classic in-fill project that is appropriate for annexation for medium-density residential use under the current General Plan. He said new homeowners would pay in excess of $7 million in property taxes over the first 10 years, in addition to more than $8 million to maintain streets, parks, police and fire protection, as well as another $8.2 million in impact fees.

“That’s over $16 million from this one project,” Bikle said. “That does not even count the millions in sales taxes, gas tax, vehicle license fees and other taxes these folks will pay.”

Bikle said the new homes would be affordable for Hollister residents.

“A new teacher, or a new police officer, or a new firefighter will be able to afford to buy one of these new homes,” he said.

Lenoir, who was on the Planning Commission before she was appointed to the city council, said she did not foresee any changes to the General Plan that would not include residential for the proposed project. She said the council may be able to affect the number of units, but it would not be able to stop the actual development because it was in compliance with the General Plan.

Richman sarcastically apologized for the developments approved by the 2015 iteration of the City Council, and asked rhetorically, “Which one of us was here? The mayor was here, and the mayor says he has this fight every time. He says he’s been trying to get the General Plan done for a couple years. Well, who has been stopping him?”

“It’s politics at its worst,” Richman said, “Don’t fix anything. Just come here and complain about it every damn day.”

During public comments, Hollister resident and Realtor Marilyn Ferreira said the Bikle project was an example of “smart growth,” and as an in-fill development it would provide homes for people who can’t afford $600,000 houses. She questioned why the city took the developer’s money, amounting to hundreds of thousands of dollars, and now “people’s futures were being held in the balance by council members’ egos.”

Velazquez said that he was not against growth. He said he has asked for the General Plan to be changed numerous times and that it might shock people to realize he cannot do it on his own. Richman continued to ask, “Who is stopping you?”

Resendiz said that he too was not against growth, but thought it should happen “sometime in the future.”

This comment provoked laughter from a number of people in the audience, as well as Spencer and Richman.

“As a member of the cockroach group, Councilman Resendiz called me a cockroach because I run away from the light and am not out front,” Richman said in reference to past comments Resendiz has made on social media. “There’s a guy who goes on Facebook and calls people he doesn’t like cockroaches, and says they’re on the take. And then he says ‘we can’t work together because we don’t respect each other.’ He’s right. I don’t respect somebody who does that.”