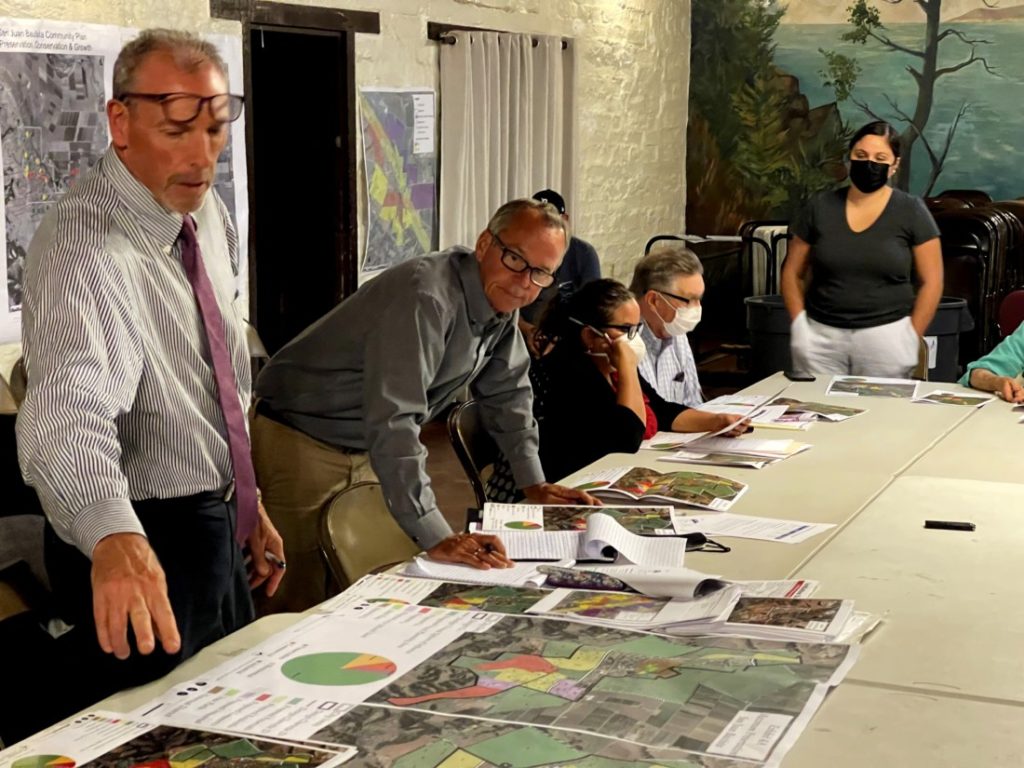 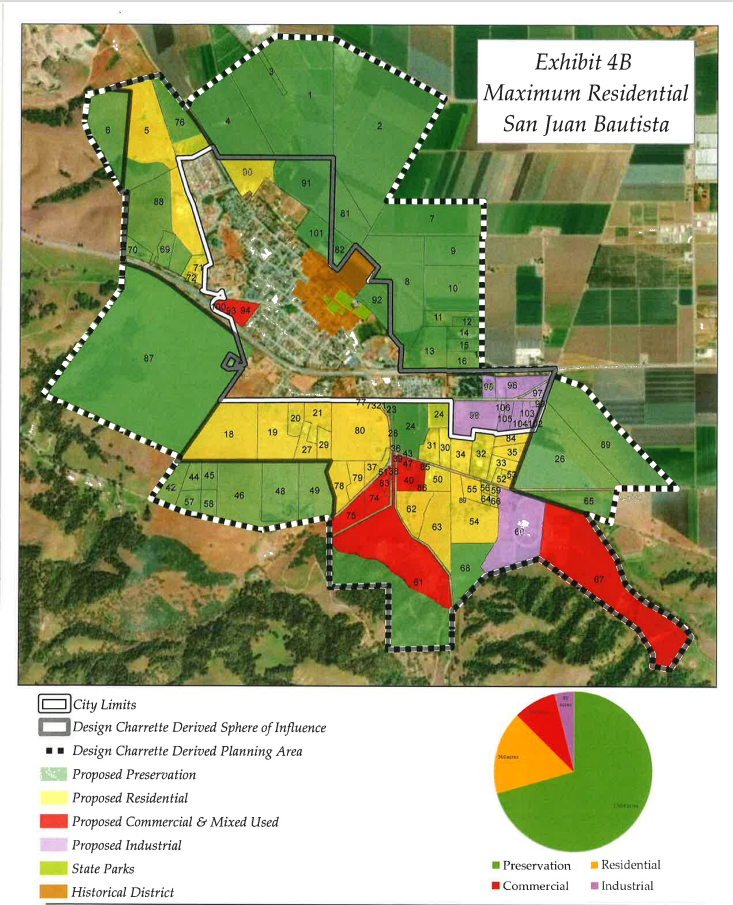 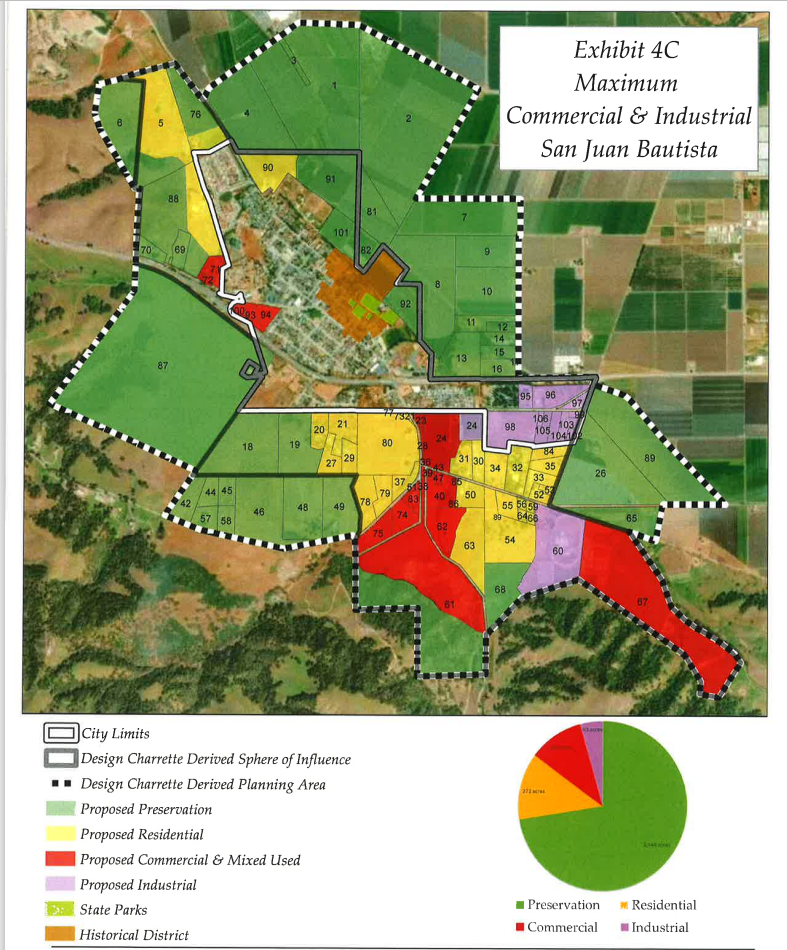 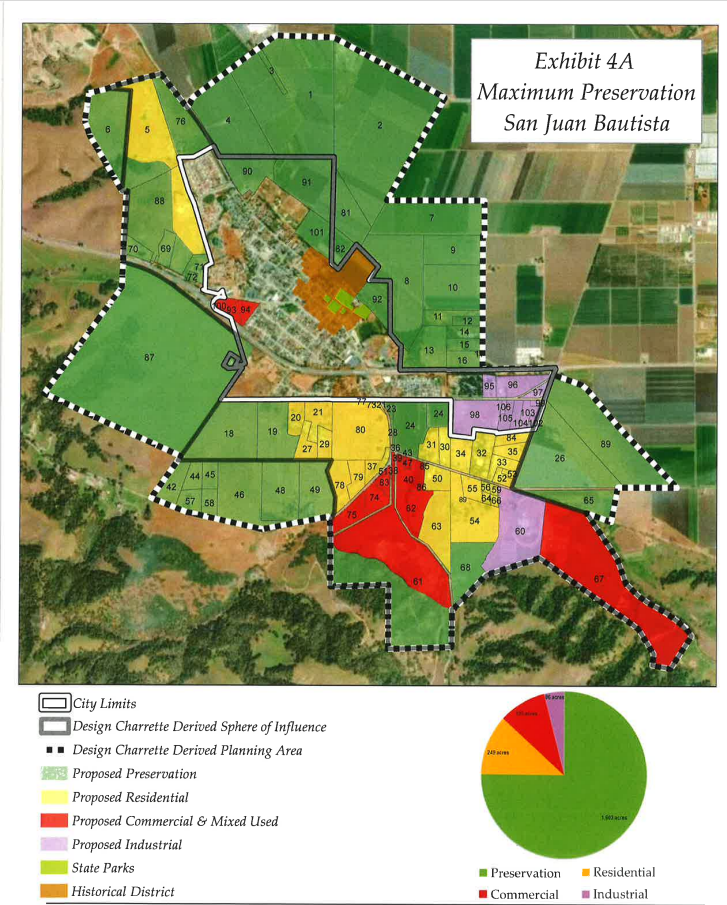 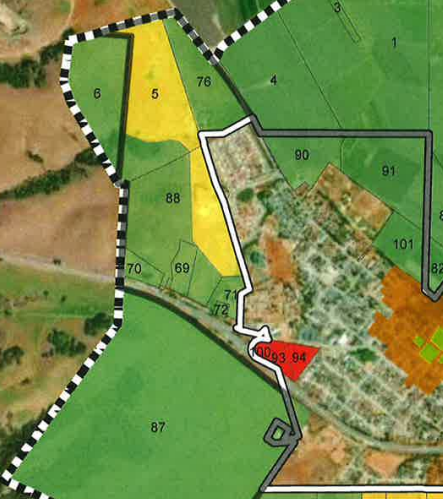 Marked for preservation on community maps, for development on finished maps. 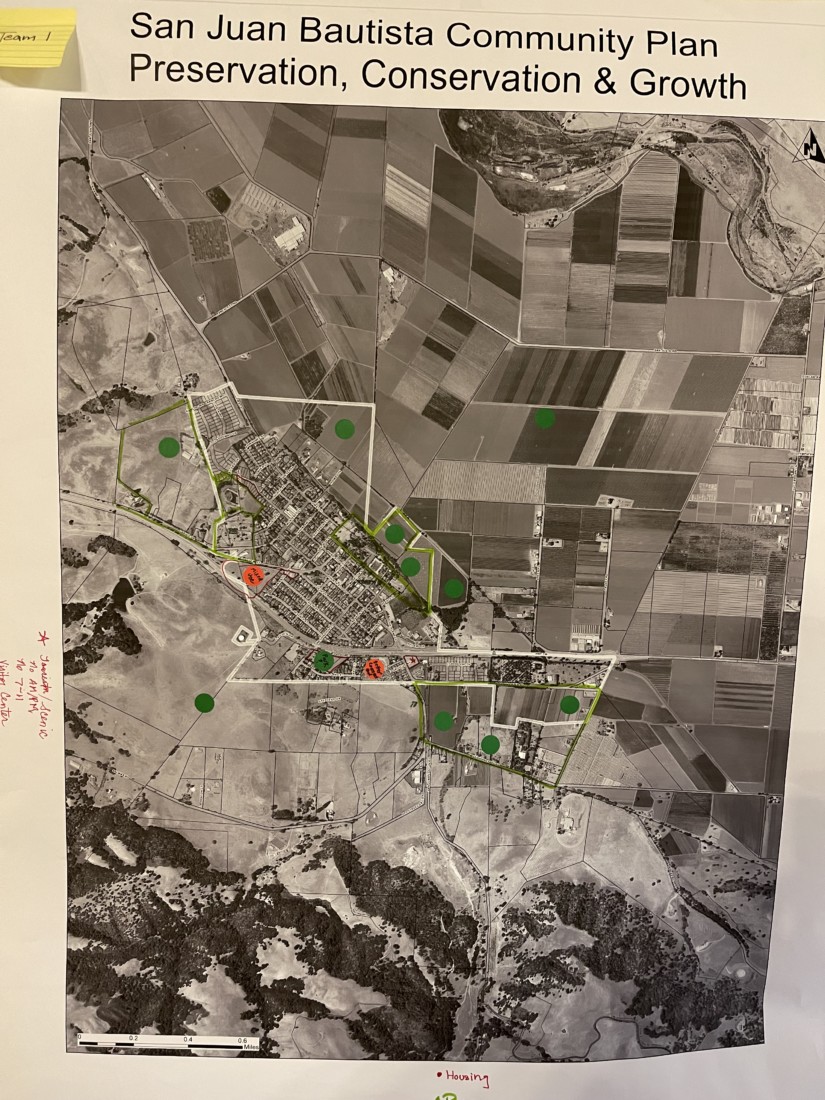 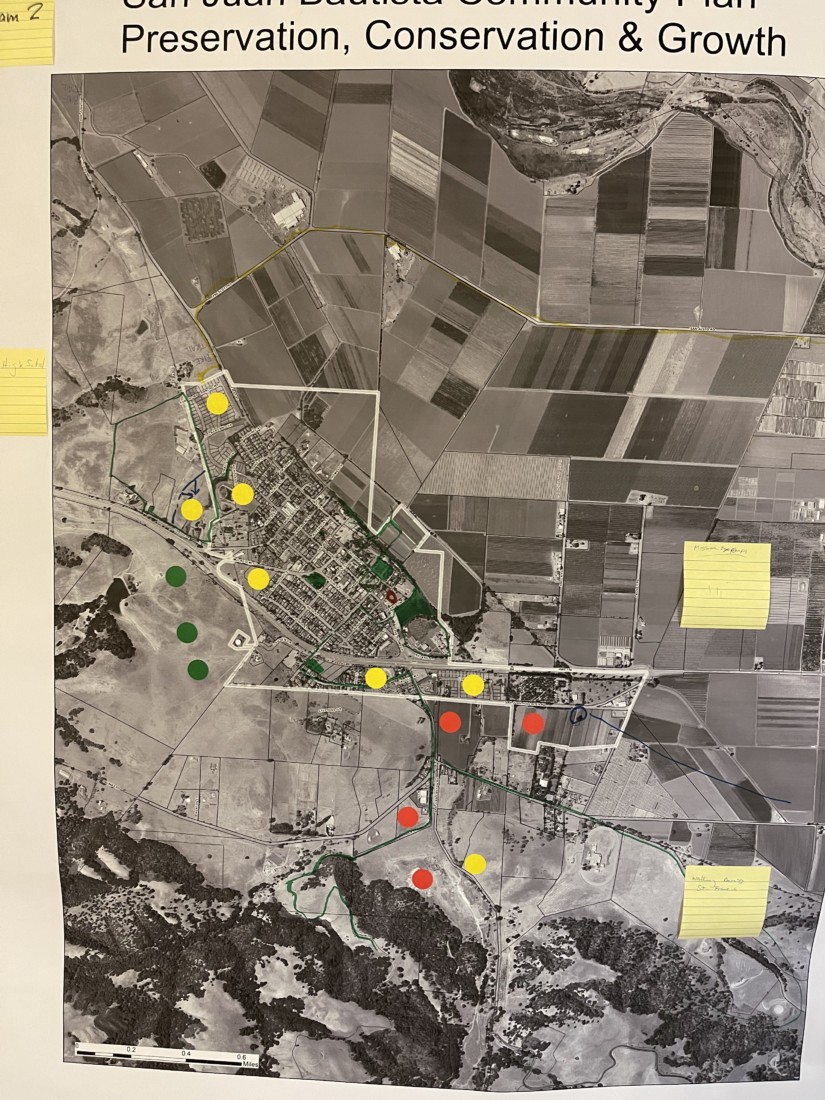 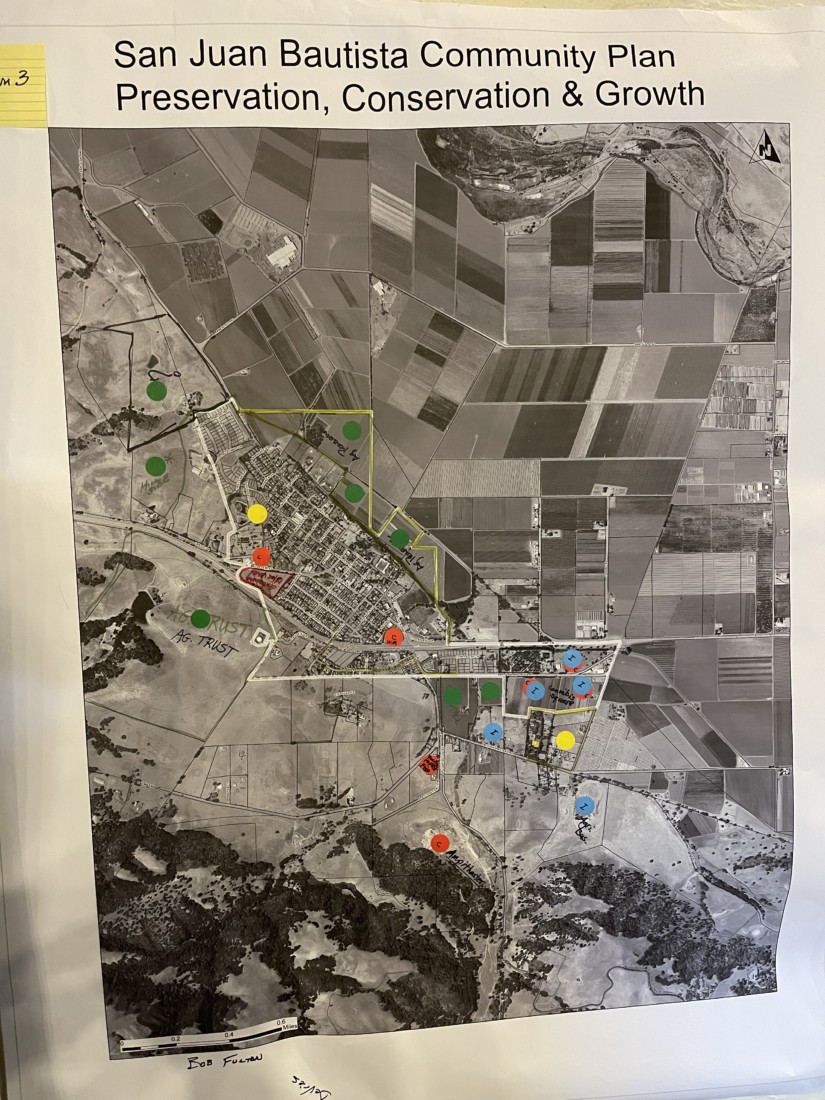 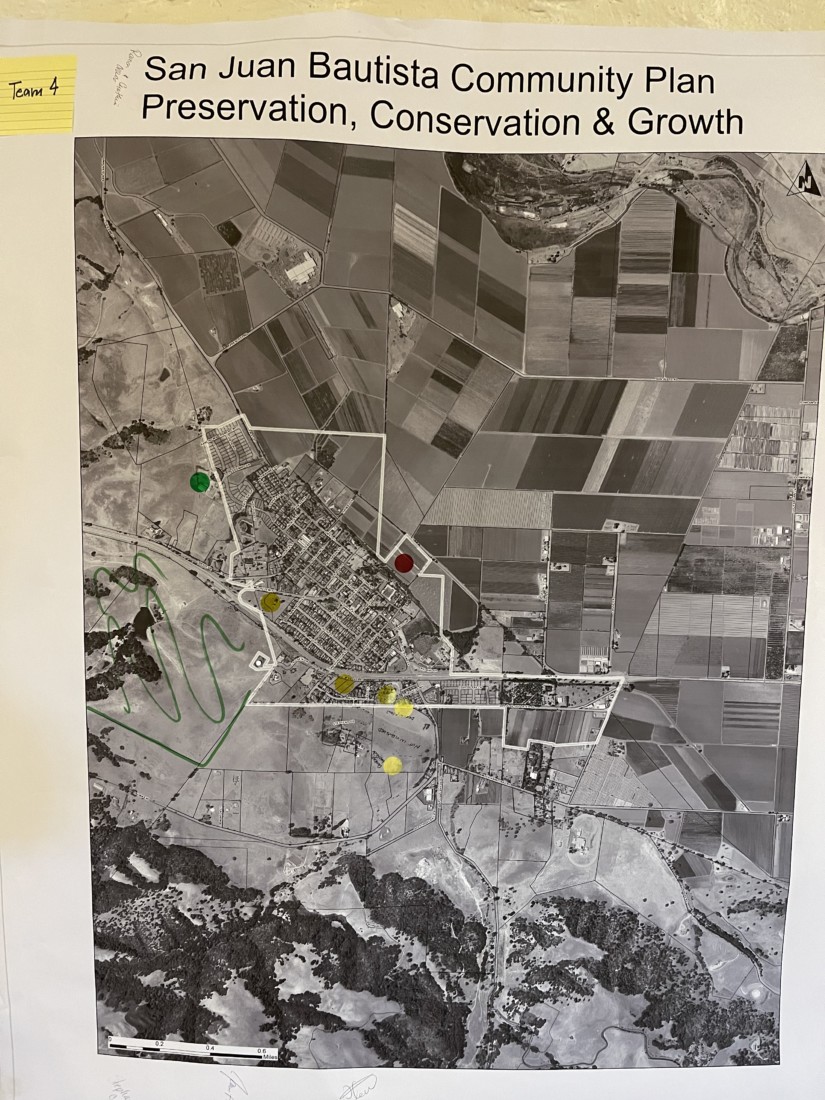 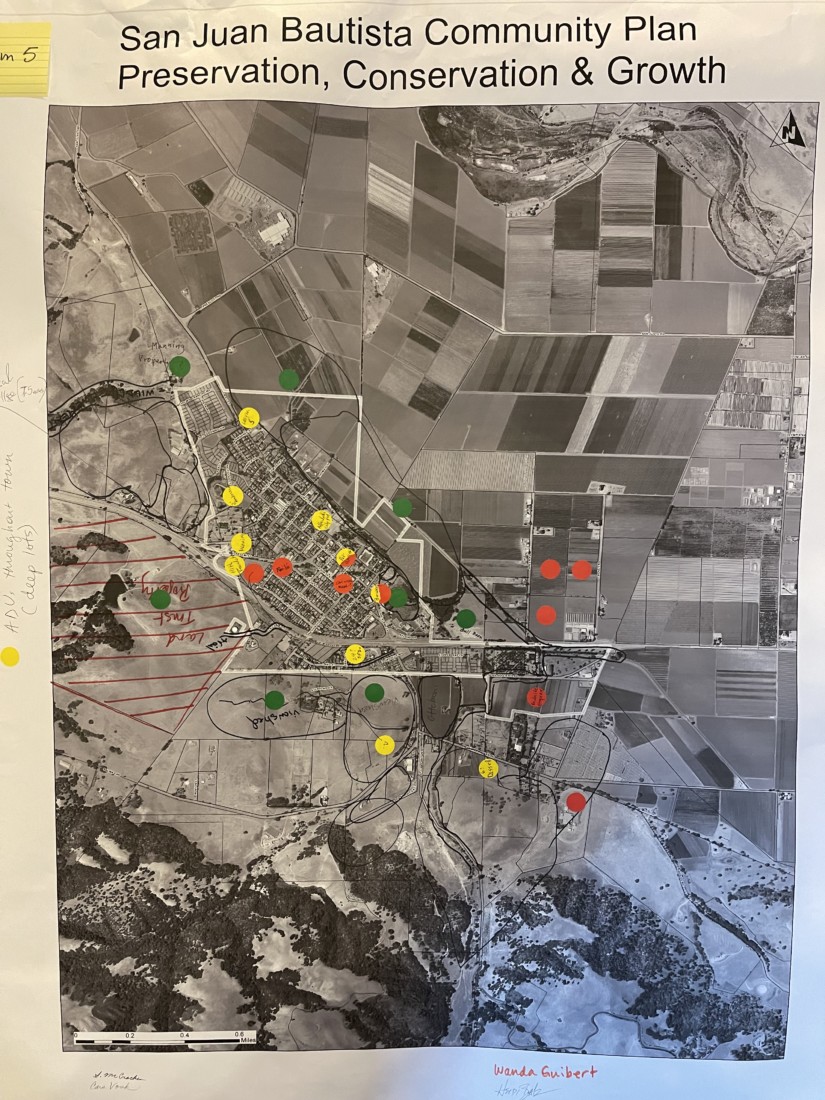 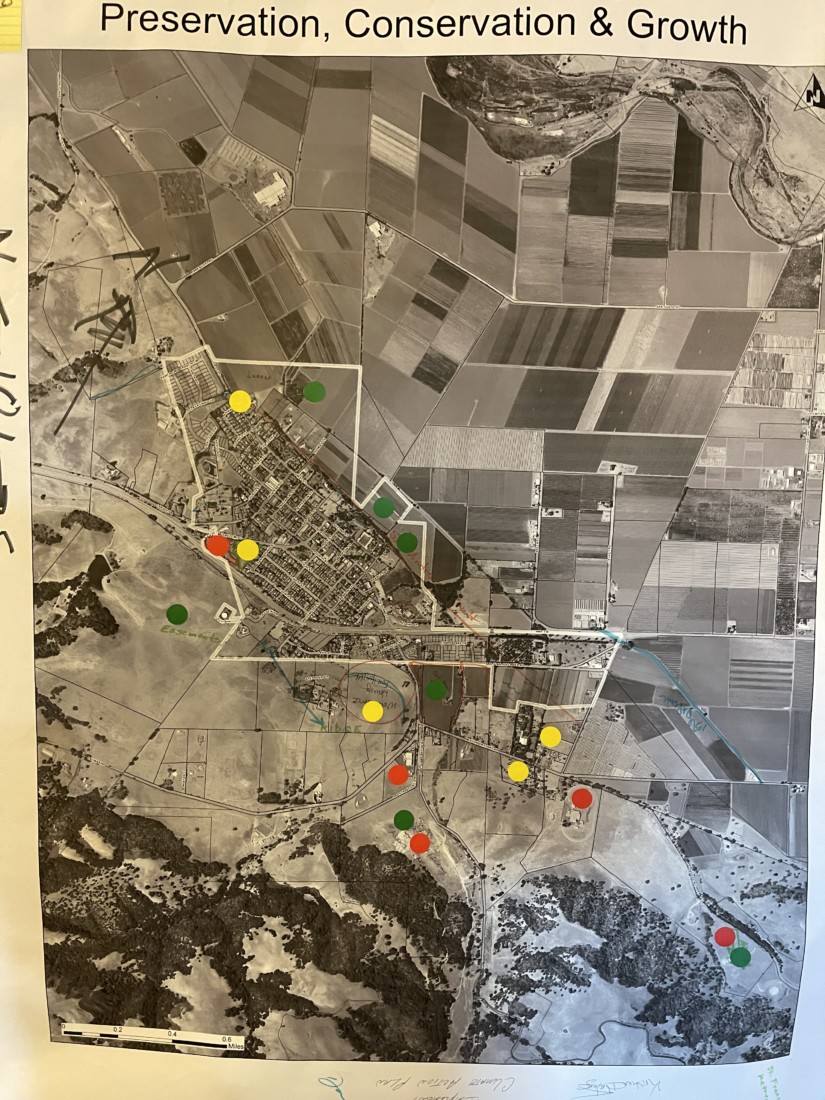 A contentious joint session of the San Juan Bautista City Council and the Planning Commission on June 13 at the San Juan VFW Hall was intended to have the public  respond to proposed city planning areas and growth boundaries. Instead, the official proceedings ground to a halt when two City Council members left during a discussion break, which ended the meeting for lack of a quorum.

At issue was a set of maps produced for the city by EMC Planning Group to establish a new sphere of influence and planning area. It’s a critical step for controlling growth, by keeping its boundaries close to existing city limits, or for allowing a city to eventually expand, by setting the boundaries further away.

EMC consulting was paid $259,457 by the city with a stated goal of “[reconfiguring] land uses to increase housing potential in the area and explore the potential for achieving some of the desired housing units through mix of uses or a well-planned combination of residential and commercial uses,” according to an agreement submitted at the Feb. 15 City Council meeting.

The California Association of Local Agency Formation Commissions (LAFCO), the agency that regulates spheres of influence, defines them as “a planning boundary outside of an agency’s legal boundary (such as the city limit line) that designates the agency’s probable future boundary and service area.” It goes on to say spheres of influence “ensure the provision of efficient services while discouraging urban sprawl and the premature conversion of agricultural and open space lands.”

With a projected growth rate of 1.9%, based on the city’s General Plan, community members at a previous EMC planning meeting had set the desired limit to the city’s growth to 88 new housing units over the next five years.

In comparison, the San Juan Bautista Housing Element Four-Year Update, also prepared by EMC, reported that the California Department of Housing and Community Development set San Juan Bautista’s Regional Housing Needs Allocation at only 41 units for the years 2019-23, with 16 to be designated as low-income housing.

However, even on the maximum preservation map, there is a suggestion of much greater growth, with a total of 249 acres proposed as possible residential areas, almost half of the city’s current total size of 506 acres. The maximum housing map raises that number to 360 acres of residential area.

The National Homebuilders Association says that there are just over five homes per acre in the typical single-family subdivision. This figure does not account for a possible decrease in usable space due to the terrain, or variations due to higher or lower density housing, but the proposed residential acreage would still mean a serious expansion of the city, if  all of the lots were to be developed.

Commercial and industrial development is also taken into consideration, with a total of 281 acres set aside on the maximum housing map and 316 acres on the maximum commercial/industrial map. The latter map is the most expansive of the three, targeting 588 acres for possible development, or an area 1.6 times the current size of the city.

The amount of land preserved in the plan is somewhat misleading. It includes areas such as the Nyland property, which has been placed in a land trust and cannot be developed, and prime agricultural areas below Mission San Juan Bautista, which are highly unlikely to be developed.

The maps were ostensibly the product of a series of public meetings that began on May 3 and culminated in a gathering of around 60 San Juan residents at the San Juan School auditorium. There the participants were broken into groups and given a large map of the city and the outlying area. The groups had 20 minutes to examine the maps and mark the areas they would designate as preserved space, plus another 20 minutes to decide on areas for residential or industrial development. Those maps were on display at the Veterans Hall, the scene of the joint session, as were three new proposed maps.

Groves said the new maps were created by examining the six maps generated at the public meeting and that they would then be combined into a preferred map that would go through an approval process that would include submitting it to the county and then to the county’s LAFCO group.

The methodology behind the maps, however, raises questions as to how much community input was taken into account. For instance, on all three maps, two lots on the north edge of the town were, in part, colored yellow, indicating the areas as “proposed residential.” On the map with the least development, Lot 5 was almost all yellow and Lot 88 was around 35% yellow. The remainder was green, indicating a protected area.

However, the opinion expressed by the participants, by placing green and yellow colored dots on the maps of those lots, was the opposite:

At the May 3 meeting, Groves was asked how much weight community opinion would carry.

“If every one of the maps here says no houses,” he said, “we are going to put the alternative as no houses. That’s how it is going to show up. We are going to present what the community presented. I will use my professional judgment where three maps say one thing and two say another or I will call that out to the decision-makers.”

Asked to explain why the areas were marked for residential development when the maps clearly indicated preservation Groves said, “We might have missed it. I don’t know. Why is it important?”

When reminded that he had said, at the May 3 meeting, that the community’s designations on the maps would be the determining factor on preservation versus development, Groves said, “We looked at the maps and came up with an interpretation. It wasn’t just me, I had two other people in my office working on it. We were working on it, coming up with the best interpretation of what those six maps said. If one of them said [develop] it, we probably thought it was an opportunity area, knowing we are coming into another part of this process and if it’s not meant to be, it’s going out.”

A comparison of the finished maps with the six community maps shows that EMC found “opportunity areas,” most of them in unmarked portions on the community maps, for new housing units that far exceed the desired goal of 88 within five years.

Although Groves told BenitoLink he had not talked with developers or landowners prior to creating the maps, “the elephant in the room,” according to San Juan Bautista Planning Commissioner Jackie Morris-Lopez was the way the conversation at the June 13 meeting kept coming back to development rather than the sphere of influence or urban growth boundaries.

That boundary became the focus of the meeting when City Councilmember Scott Freels questioned why a sphere of influence map he had helped create in 2019, along with other city officials including DeVries, was not available at the meeting. He said the participants that night were engaging in work that had already been done.

Eventually, Mayor Leslie Jordan called a recess to allow for private discussion and for Community Development Director Brian Fouche to retrieve the 2019 map from City Hall. Council members Freels and Flores left the meeting, as did about a third of the participants. This ended the quorum and a stunned Jordan was unable to call the meeting back to order or even officially adjourn it, under parliamentary rules.

Jordan asked the remaining attendees to participate in an informal discussion about the maps presented by EMC and with the cooperation of approximately 20 residents, Groves began working lot by lot around the borders of the city, discussing each one and seeking a consensus on whether it should be inside or outside an urban growth boundary.

In the course of the discussion, San Benito Health Foundation Director Rosa Vivian Fernandez mentioned her intention of building a clinic on a property across from the Valero gas station at 63 Muckelemi Street. She confirmed that she was seeking to build 60 high-density two-story housing units on the property as well, along with an unspecified number of units on the property the foundation owns on Salinas Street, which is currently agricultural land.

If the 60 units near Valero are built, that would fulfill almost 70% of San Juan’s housing quota for the next five years.

After another 80 minutes, a tired Groves announced that the sphere of influence and urban growth boundary map had been completed. It was just one of the evening’s several agenda items.

The map was a truncated version of the one EMC had proposed, with substantial cuts to its area. All property to the east, north, and west of the city that EMC had included for development in its maps were removed, along with more than half of the property to the south.

As with the previous public meetings on this project, the June 13 session was not available to the public on Zoom. Unlike the meeting that generated the community maps, the June 13 meeting was not videotaped, but an audio recording was made.

Limited public input and questions about the transparency of the process were brought up by several participants. Property owners said they had not been notified of the various forums. Others said there were rumors of private tours of properties that owners were interested in developing, which Fouche dismissed as untrue.

Former San Juan Bautista Mayor Chris Martorana cited a lack of public information leading up to the Copperleaf (2017) and Rancho Vista (2015) subdivisions as one reason for pushback against EMC’s plans, saying, “I think that is emblematic of the distrust that exists in this community. I think in that case, the previous staff was working very diligently behind the scenes on behalf of property owners and developers.”

The result, Martorana said, was that the developments moved quickly through the planning process and then were rushed through the City Council.

“We want to put limits on what we can do, so we are not racing after the fact,” he said. “That is exactly what happened with both of those developments—by the time we realized there was a problem, it was too late to do anything about it because, by that time, they had the right to do what they wanted.”

On June 14, the new planning area map, which could critically change the course of San Juan’s future, was posted on the city’s website. It was drawn up by a handful of residents after the official meeting had concluded.