Private advertising is NOT government mail - don't be confused 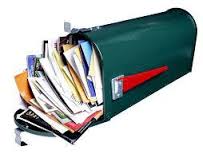 You may get an envelope in the mail with no return address, a presorted postage paid mail permit number and a big red stripe with white letters that says, “IMPORTANT BENEFIT ELIGIBILITY INFORMATION."  This envelope does not come from the government; it comes from a private company that sells some form of life insurance. Don’t make a mistake; this is NOT a government program.

This company wants to make sure you don’t mistake their envelope or insurance plan for a government plan; therefore, they have gone out of their way you keep you from getting confused. First, they put an official looking barcode on the back of the envelope next to an 11-line statement that starts with – “The U.S. Government, the Federal Medicare Program nor any state agency is affiliated with or endorses the company or its representatives.” With a statement like that where in the world might you or anyone else get the mistaken idea that this was a government program rather than what it is, merely a mass-mailed solicitation to purchase private life insurance?

Disclaimers are usually there as protection from legal action – and this is a disclaimer – although they are often meaningless like the warning on the form that says, “Requests received after 15 days may not be processed.”  What does “may not be processed” mean?  It could just as easily say, “may be processed” which means the same thing.

The solicitation itself says it is the trademarked (in tiny TM letters) “Funeral Advantage TM” Program.  Carefully note that it does not say it is Federal Advantage Program or a Medicare Advantage Plan, no one could easily make that mistake; certainly not you or I.  Besides, there is a sketch of a dove in a circle in the corner does not really look like an American eagle. This company is being extra careful; I have had life insurance in my time and I can’t remember any of the ads that ever said that the not affiliated with the government, why should they?

In any case, the insurance company has included a big disclaimer on the back of the envelope – I know you read those – so they certainly won’t mind if you tell your relatives and friends, especially those who are elderly or have limited English, that is a private firm doing mass mailings to sell insurance and it has nothing to do with the government at all.

If they do need life insurance you may also suggest that they obtain copies of policies, lists of exceptions, exclusions, limitations, and costs from several sources and consult a trusted advisor before making that important, and often expensive, decision.

My message is not a government program either so don’t get mixed up.