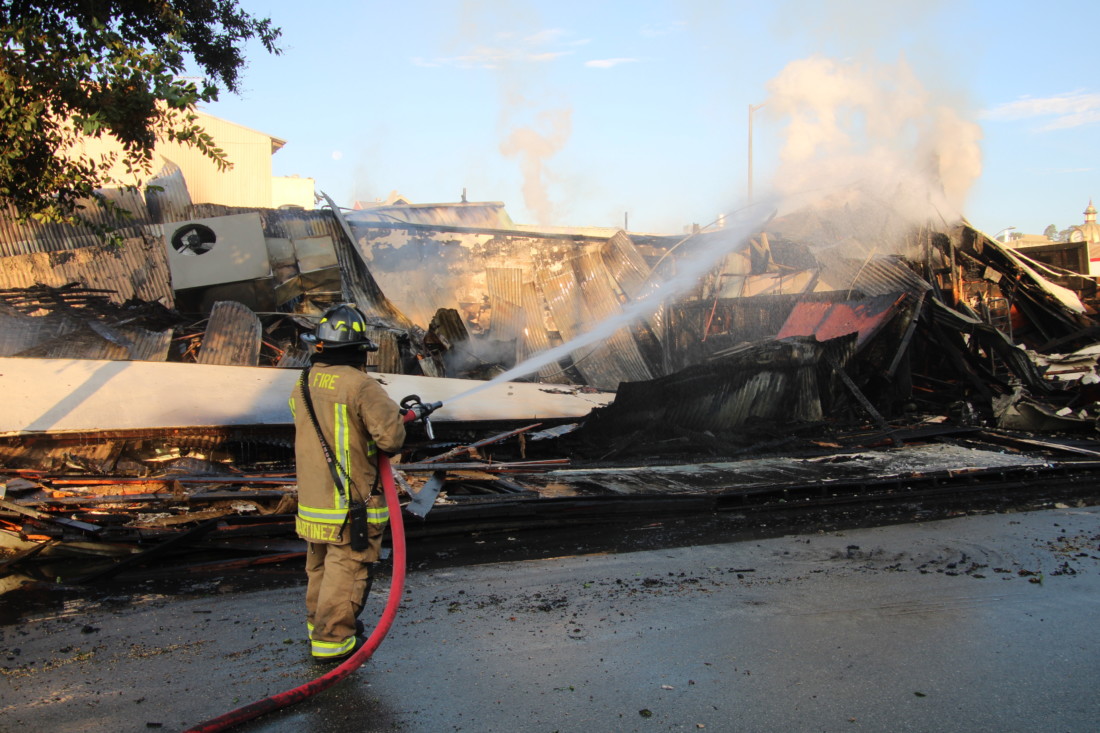 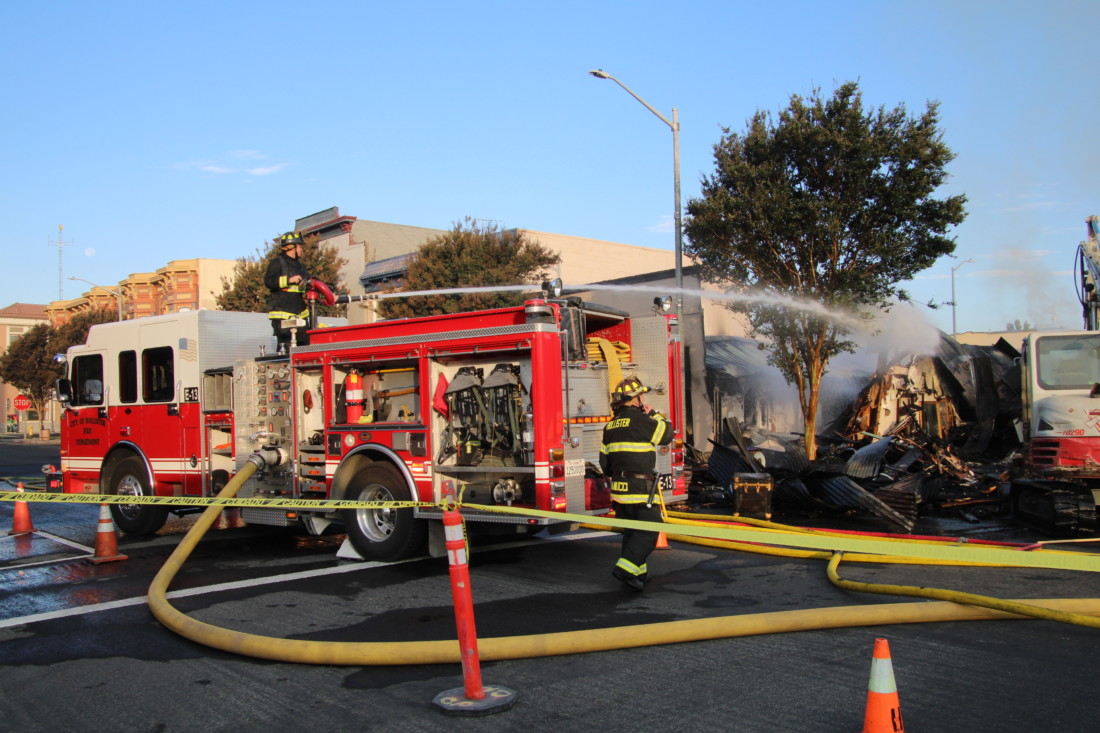 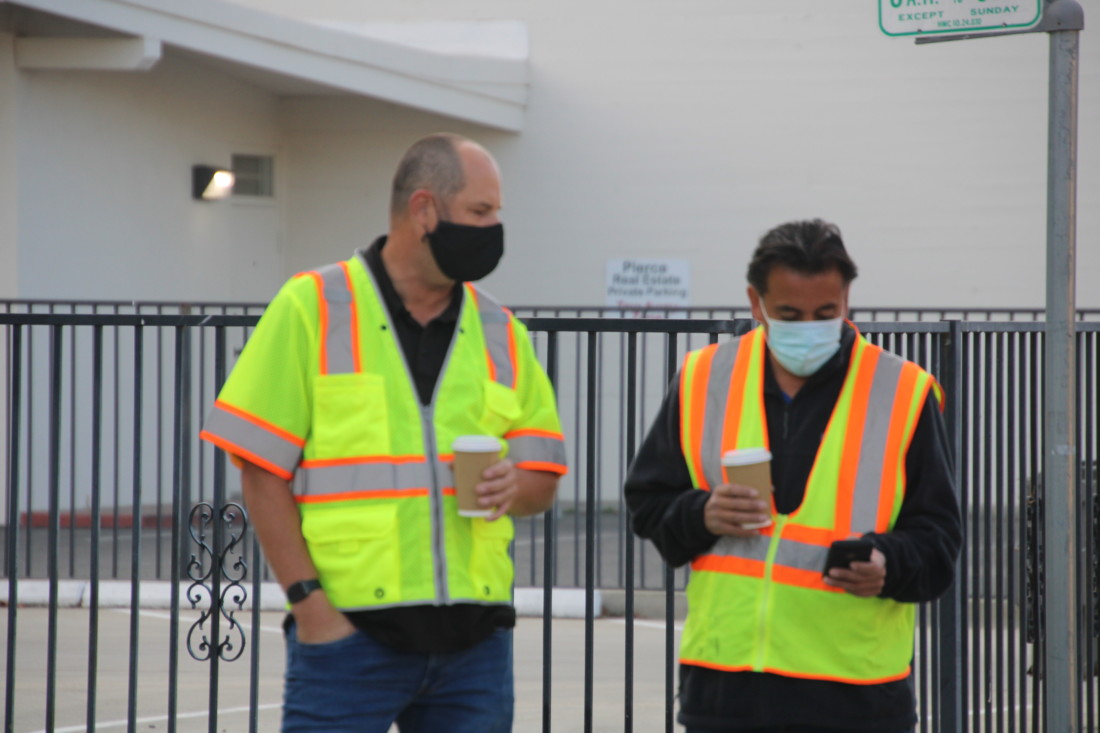 Early morning blazes occur minutes apart from each other; HPD arrests one suspect.

Firefighters battled two structure fires in downtown Hollister within minutes of each other in the early morning hours of Nov. 2. Photo by John Chadwell.
×

Editor’s Note: The Hollister Police Department has arrested one suspect related to these fires.

Hollister police and fire agencies are investigating four separate downtown fires that burned in the early morning hours of Nov. 2. Other nearby fire agencies from Monterey, Santa Cruz and Santa Clara counties, as well as Cal Fire, assisted in the response.

“At 2:35 there was the structure fire on Fifth and East Streets,” he said. “That’s a lot of fires in a short amount of time, and we exhausted all of our resources in a matter of 10 minutes. The car fires were out within five to 10 minutes.”

Cheung Sheng Chinese Restaurant was destroyed, as was She’s Consignments and Gifts, and possibly Faultline Tattoo at Fifth and East streets. The fire chief said he believed the fire impacted as many as 10 businesses. Other businesses nearby include Rowe Upholstery, Salon 218 and Irma’s Fashions, but Martin del Campo was not sure if they had been affected.

A total of 13 units and 45 to 50 firefighters responded to the fires, Martin del Campo said. While he hesitated to say the fires were arson, he said it was “a strong coincidence” and that the fires “could be linked to each other.”

As part of the investigation, the Hollister Police Department will share footage from a 360-degree camera located at the corner of Fourth and East streets directly across from one of the fires.

“There are a lot of cameras around here, so there’s a lot of visibility in the area,” Martin del Campo said. “We’re going to be able to see what was happening before, during and after the fires.”

Both structure fires involved old wood buildings. Martin Del Campo said because of so many spaces within them it was difficult to determine where the fires started. Even though Fire Station No. 1 is just two blocks away from the Cheung Sheng Chinese Restaurant, it was completely ablaze by the time firefighters were able to respond. He said the fire there was contained by 4:15 a.m.

“Right now, we’re going through what’s called ‘overhaul,’” Martin del Campo said. “We go through each section of the buildings looking for exposures or extensions of the fire to adjacent buildings. The fire was so intense and so rapid we couldn’t see if it started inside or outside, but they’ll be able to determine that during the investigation.”