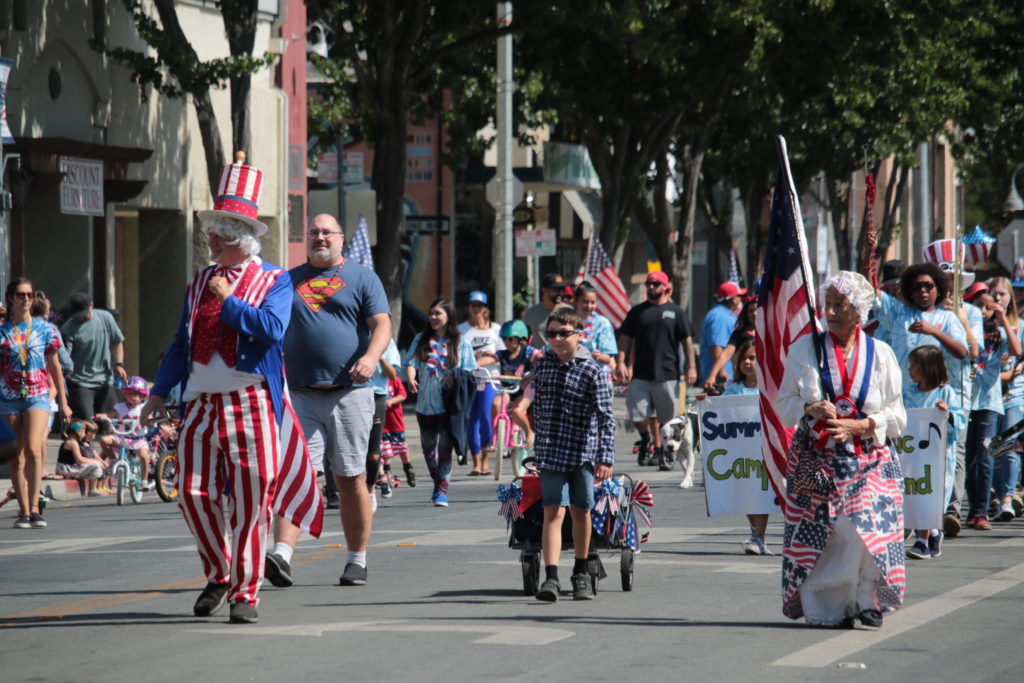 If the turnout of an estimated 1,000 people downtown was any indication of its popularity, then the annual Kiddie Parade was a roaring success. Kids on decorated bicycles and tricycles, along with parents and grandparents, meandered through Hollister to celebrate Independence Day on July 4.

For the last three years, the Hollister Recreation Department has organized the downtown event. Prior to that, the parade was held on Memorial Drive adjacent to Veterans Memorial Park.

“Facebook is a great friend of ours and it’s free,” Garza said. “We also promote it at a lot of our events and the City Council announces the parade is coming up because we ask for a street closure. We also have the summer marching band.”

With Erickson portraying Betsy Ross and San Benito County Chamber of Commerce 2018 Man of the Year Jim Hart as Uncle Sam in the lead, the parade began and ended at the Veterans Memorial Building after a four-block journey. Attendees snacked on cookies and other refreshments. There were also photo opportunities with Uncle Sam and Betsy Ross, politicians circulating through the throng, relay races and Hollister firefighters displaying one of their engines.

Hollister Mayor Ignacio Velazquez was downtown taking pictures and greeting the public as his kids participated in the parade.

“My kids have been doing it ever since they were able to walk,” Velazquez said. “My boy’s 14, so we’ve been doing it for about 12 years. It’s a great event for families to get together on an important day and shows our community support.”

He said he hopes the event will be held at Dunne Park in 2020.

“We could circle around the historical neighborhood,” he said. “It would be a lot better for everybody.”

Former County Supervisor Margie Barrios said she has participated in the parade for 10 years.

“Having it downtown is wonderful,” she said. “It’s more well-attended than it was over at the Veterans Park. It was nice, but now you see a lot of folks who can stay downtown, go out to eat, so this is great.”