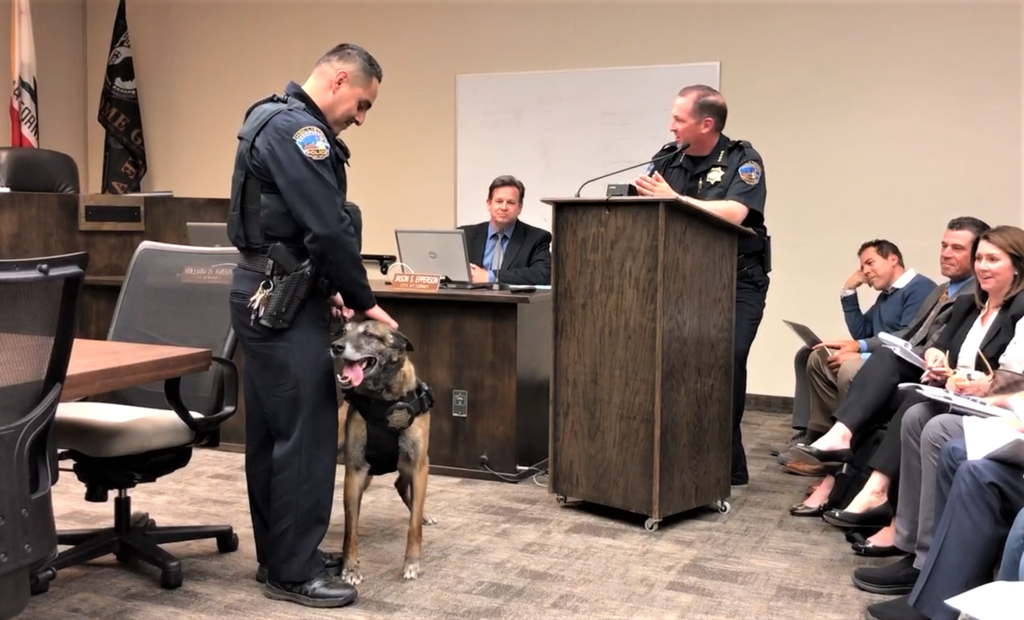 The Hollister City Council approved a resolution on June 3 to purchase a new police K-9 officer to replace the retiring Freeze, a Belgian Malinois dog. The council resolution included training of a new handler and conversion of an SUV vehicle for K-9 use.

Officer Freeze was officially retired during the council meeting. His handler, Officer Aurelio Melgoza, escorted the nine-year-old dog down to the podium where Hollister Police Chief David Westrick introduced them to the audience. He said Melgoza, who joined the department in August 2015, had been promoted to detective. Mayor Ignacio Velazquez signed a certificate proclaiming Freeze’s retirement.

“As with all retirees, we’ll welcome him back to the employee appreciation dinner every year, and we’ll make sure we’ll have some kibble for him,” Westrick said.

Melgoza told Benitolink that Freeze was involved in a number of cases where he was instrumental in discovering drugs and weapons or tracking violent felons. He said Freeze was particularly valuable as a deterrence.

“I’ve had multiple occasions when people didn’t know that I was a K-9 officer and they wanted to fight me or resist, but then they would hear Freeze and they’d think I was going to release him and something bad was going to happen to them,” he said.

Even though Freeze is now a family dog, Melgoza said Freeze is always protective of him, though his demeanor is changing from always being “on the job” to going up to people who come into the backyard begging for pats on the head or attention.

“Now, he’s running around in the backyard having fun,” Melgoza said.

The cost of a new K-9 will be $10,250, an eight-week handler training course is $6,400, and the vehicle conversion is $7,000, totaling $23,650. The Hollister Police Department, according to the resolution, had two K-9 units working the last few years. The K-9s not only assist officers in the detection and apprehension of suspects, but also in locating evidence and illegal narcotics. When a K-9 is on the scene, perpetrators are more likely to comply with officers, which reduces violent conflicts, the resolution said.

Wonder Woof, a privately-owned company that collaborates with schools, families and businesses to discreetly conduct drug, alcohol and gunpowder detection searches, donated Freeze to the Hollister Police Department. He was sworn in on June 2, 2015. Freeze assisted with searches for illegal drugs in cars, on people and in structures. He was also used to clear buildings, help on search warrants, felony car stops and tracking fugitives. He retired primarily because of his age and Detective Melgoza’s new assignment.