In addition to serving local communities, John Smith Landfill has taken in trash from other communities since 1992. How much do you really know about the landfill's past, present and future? 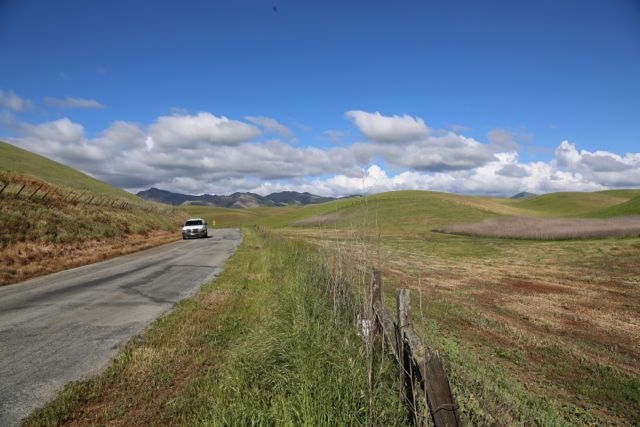 John Smith Road with landfill to left and proposed resource site to the right of road.
×

Know Your Dump. Oh, maybe not the first thing that comes to mind when we talk about what our community needs to know. But there's so much going on at the John Smith Road Landfill and its surrounding area that it caught our attention. Interesting changes, like the County approval to not just expand the Landfill itself but the permitted tons per day. San Benito County Board of Supervisors recently agreed to expand the landfill and double the allowed tons with out-of-county waste. Also being heatedly discussed is the County's interest in helping facilitate and fund a Resource Recovery Park on John Smith Road across from the landfill. Meanwhile, several housing and road projects in the same general area of Fairview and John Smith Roads are in various stages of the approval process.

A landfill, more commonly known as a "dump", is an essential part of any community. No, they're not usually attractive (although they certainly could be improved upon) and they're probably not what you choose to read about in your free time.  Maybe that's why most of us know so little about our local landfill.

Once barely noticed, landfills can become a real challenge for local governments from expensive legal settlements over land "takings" to battles over neighboring groundwater contamination.  This article is an effort to wade through the endless filings and reports to help you understand a little more about your facility.

The John Smith Road Landfill was opened in 1968, before liners were required as a protective layer between the waste and the soil. Mandy Rose, Director of the County Integrated Waste Management Department explained the progression, "Both municipal solid waste and hazardous waste could be disposed in the areas under the regulations at that time.  However, in 1974, hazardous materials were disposed in a section of the landfill set aside for that purpose". The Class I or  Hazardous Waste Management Facility on the site was closed in 1983, at the same time the federal and state governments mandated testing of landfills.

In the late 1990s, San Benito County and the city of Hollister found themselves in the same situation as many California communities when it comes to landfills. When the Environmental Protection Agency(EPA) filed its 1996 final decision on the John Smith Road Landfill, the location was categorized as a "Superfund site".The water and soil testing found contamination and a local business was found to be at fault for dumping agricultural rinseate, or water containing low concentrations of contaminants. The EPA's  Consent Order demanded regular monitoring and a game-plan to gradually remove the contaminated water  from the site . If you're curious, the toxic compounds originally found are listed in the 1996 EPA(Environmental Protection Agency) document,  Statement of Basis/Final Decision and Response to Comments Summary for John Smith Landfill. We put together an explanation of some common uses of these chemicals and their known health risks. Releases of hazardous wastes to groundwater is the reason why liners are now required with landfill gas and leachate control systems.   Mandy Rose, Director of  Integrated Waste Management for San Benito County, said that the liners that are installed beneath the Class III (Municipal Solid Waste) site in use today can be expected  to hold up at least 30 years.

Who's in charge here? According to the San Benito County 2010 Budget document, "The Integrated Waste Management Department is responsible for oversight of County-owned landfill operations. Landfill operations consist of Post-Closure activities on the closed Class I site and on-going compliance with Corrective Measures implemented by US EPA and the California Department of Toxic Substances Control to remediate the contaminated groundwater plume beneath the active Class III landfill; oversight of contract operations at the active Class III Municipal Solid Waste landfill; and regulatory compliance with landfill permits from the California Integrated Waste Management Board, Regional Water Quality Control Board, Monterey Bay Unified Air Pollution Control District and the Department of Toxic Substances Control."

Around the same time the expansion was being presented, the San Benito County Board of Supervisors approved an additional 500 tons of waste into the landfill per day, for a new daily permitted tonnage of 1,000 tons per day. Currently most of the additional waste will come from out of county sources, primarily Santa Clara County. This means the traffic travels not just locally but across the northern end of the county. In 2010, the Supervisors signed a “life of site”commitment with Waste Connections Inc the landfill operator; and gave the company exclusive rights to construct a new landfill in the area across the road near the entrance, in the same general area as the  proposed Resource Recovery Park. According to Rose this commitment could last as long as 60 years.

What is the ground water quality at the John Smith Landfill and surrounding area?  All landfills are  required to monitor the groundwater, soil, surface water, landfill gas, gas condensate meaning liquid that comes from the landfill gases and leachate, meaning liquid that has been filtered through the waste in the landfill. This monitoring is required to be performed regularly. According to Rose, no violations have been reported at John Smith Road Landfill for over two years.

In a recent Environmental Impact Report done for the proposed Resource Recovery Park, the Golder Associates research firm discussed several compounds that showed up in the Third and Fourth Quarter 2012 testing.  2012 Monitoring Report for John Smith Road Landfill Class I and Class III facilities.  The Maximum Contaminant Level (MCL) was set by the Hazardous Waste Facility Post Closure Permit and is overseen by the Central Coast Regional Water Quality Board.

Here are the chemicals that were above the Maximum Contaminant Level in the most recent testing and their characteristics according to the US National Library of Medicine, Hazardous Substances Data Bank:

1,2-Dichloroethane-  Used in soaps, solvent and former use as fumigant. Possibly carcinogenic in humans. Evidence of carcinogenicity in experimental animals. Toxicity “by inhalation or ingestion has resulted in a variety of effects in humans, including effects on the central nervous system, liver, kidney, lung and cardiovascular system.”

Mandy Rose with the County's Integrated Waste Management Department says there has been gradual reduction in volatile compounds in the groundwater. Golder Associates' well monitoring report supports this in general. However, according to Golder Associates, the off-site plume of contaminants "appears to be wider than previously thought." Golder stated they were encouraged by the monitoring and extraction system in general. But some malfunctions in the extraction well system were reported in a 2011 Golder Report. They also mentioned in their 2012 report used in the Proposed Resource Recovery Park EIR that filling gaps in monitoring information would be beneficial for broader understanding of the site.

What is the status on the landfill gases being produced on the site? The Golder Associate report mentions that there was a "shutdown regulatory request" on the Landfill Gas Extraction System in February 2000. This was due to a non-complying flare, which took over a year to resolve. Since then, some extraction wells have been replaced and many more have been added. In 2012, the landfill flare assembly (that burns off the landfill gas) was under-capacity so a new, larger landfill flare assembly had to be installed. According to the Golder report, "the landfill gas extraction system was periodically shut down during 2012 because of equipment malfunction." The report states that the system functioned 85% of the time in 2012. San Benito County is interested in making use of the methane gas produced at the Landfill. This is being done commercially in other areas but there are often safety issues and possible buffer-zone requirements for this sort of large scale project.  Due to the complexity of the subject, no testing results on landfill gases are included in this story.

What other developments and road work are under discussion in the area? As mentioned earlier, the Santana Ranch Development on Fairview Road between Hillcrest and Sunnyslope Roads has been approved by the County Supervisors. In November 2010, all County Supervisors aside from Supervisor Pat Loe approved the plan for a 1,092 unit housing project on 294 acres. The land is currently used for agriculture.

The Guerra Property, just west on John Smith Road, is currently a vineyard and location known for hosting outdoor concerts. It has been given a tentative map for a housing development. Another large project under consideration is Fairview Corners, set at the intersection of Airline Highway (Hwy 25) and Fairview, across from Ridgemark Golf and Country Club. This land, currently used for agriculture would be converted to a Specific Plan zoning district. The Final EIR states, "To ensure the necessary flexibility to respond to market demand and community needs, the Specific Plan provides for a range of potential densities that may be developed as well as a variety of potential housing types, including secondary units. However, a maximum of 220 primary dwelling units would be permitted on the project site." Although it is not in the immediate vicinity of John Smith Road, it is inevitable projects like this will have a cumulative affect on Fairview Road traffic. According to Steve Wittry, San Benito County Public Works Administrator, long-term county goals include the expansion of Fairview Road into a four-lane road from Airline Highway (Hwy 25) to McCloskey Road.   Fairview Corners Final EIR

Much of this info is available on the San Benito County website but for your convenience, here is the EIR for the Proposed Resource Recovery Park, now over 1,400 pages long. The report in paper form is unaffordable for most at over $30. At the same time, a large percentage of San Benito County residents still do not use the computer for this sort of information. Although it is called the "Final EIR", it is currently being revised and is not yet complete. To get the best picture of what is being discussed you can read the Final Impact Report for the Proposed Resource Recovery Park and the more recently produced  Draft EIR .

An updated EIR on the Proposed Resource Recovery Park addressing transportation issues is expected in June. Although many citizens have commented in the past, Integrated Waste Director, Mandy Rose says those comments are still on record and additional public comment will be invited on the upcoming EIR. The next activity for citizens to follow at the landfill will be the Proposed Resource Recovery Park. More thorough coverage of this proposed project are covered in two accompanying articles entitled, "Recovery Park Still Hot Topic" and  "Citizens Ask, Does It Make Cents?"