Local hunter Kurt Lanning goes on a hunt of a lifetime and bags a few awards. 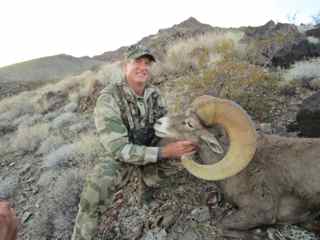 Lanning with the prize winning ram.
×

Local hunter Kurt Lanning will be heading up to Sacramento in April to pick up a hard-earned hunting award. Hunting as sport and as a source of food is still a passion for many in San Benito County. When I heard about Kurt Lanning’s recent adventure I thought there might be a few hunters and outdoorsmen who would enjoy his story. Kurt and his wife Mary Margaret helped me with the writing and facts on this story.

Kurt Lanning is known by his friends for being an avid and conscientious hunter. For 11 years he applied in one region for a sheep hunting permit but because of a simple suggestion from someone familiar with the process, he decided to try another zone this year. “When the draws were posted online, I was ecstatic when I saw I drew the tag,” said Lanning. He immediately called a guide and booked a 14 day hunt in the Clipper and Marble Mountains in California’s Mohave Desert.
A limited number of sheep tags are drawn each year and only 24 High DesertBighorn tags were drawn for California’s 2012 season. Kurt was
lucky enough to be selected out of thousands of hunters that apply for the
draw. So the chances of getting drawn are very slim and once drawn you can
never draw for that sheep tag again in California. This is why for a serious hunter like Kurt, it is a once
in a lifetime experience.

Finally Kurt and his wife Mary Margaret were set to go on their expedition at the end of December. Just before the trip, Kurt was diagnosed with a serious blood clot in his leg from a strained calf muscle. The clot traveled to his lungs and he was put in the hospital for four days. For a moment his was facing a life-threatening ailment and his chances for his adventurous sheep hunt were diminishing.
With overall excellent fitness and the help his wife, a personal trainer and nutrition consultant, Kurt somehow managed to recover in 3 weeks and next thing you know, they were headed to sheep camp on December 28th, 2012.
Here’s a record of their hunt by day:
Day 1: Kurt, Mary Margaret and their guide hunted all day in the Clipper Mountains and only found two rams that weren’t mature enough.
Day 2: They located three rams. Moved up within 500 feet to see them better. Decided that one of the rams would be legal but they chose to pass on the opportunity. They hunted the rest of the day and saw eight ewes and seven more rams that weren’t quite what Kurt was looking for. (Kurt’s goal was a large, mature ram that would get their hunt in the record books.)
Day 3: Kurt’s group went to the Marble Mountains. He and Mary Margaret hiked all morning and met up with the guide at lunch at an old outfitter’s campsite. They saw four small rams and two ewes that day.
Day 4: New Year’s Day. Doesn’t everyone want to up before dawn to go hunting on New Year’s day? Kurt and Mary Margaret saw 21 rams and 19 ewes but nothing meeting Kurt’s goals. They said they enjoyed the beauty of the big horn sheep countryside.
Day 5: Planning the next morning, the guide felt they should hike further and deeper into the Clipper Mountains. They hiked all morning and journeyed into the high peaks. Mary Margaret, an exercise addict, wanted to go higher into the next range. So after lunch they continued on to higher peaks. This is where Kurt finally found his ram. It took him several minutes to decide that this was the animal he wanted to bring home and represent this great opportunity. After years of hunting, buck fever wasn’t a factor. He took his shot from 364 yards away and successfully brought the animal down.
Kurt described the experience, “After moments of excitement and congratulations, we gathered our gear and started toward him. We knew I harvested a large ram, but when we approached it, I then could see that it was way bigger than we thought. It had ground growth instead of ground shrinkage. We were in awe of this extraordinary animal. It was unbelievable!”

Kurt’s ram has the largest horn base ever scored in California. The horn length was over 40” also a record breaker for the whole state. The “old warrior” was over 13 and a half years old, the oldest of the season. The ram got a final “green score” of 181 1/8” by a Boone & Crocket scorer. In a letter to the guides of his trip, he expressed appreciation for their professionalism and he wrote, “I can’t thank you guys enough for providing my wife and me with memories that will last a lifetime.”

After returning from the hunt, Kurt was informed that he won the Patriarch Award for the oldest and most distinguished Bighorn Desert Ram taken in 2012 by both the California Wild Sheep Foundation and the Society for the Conservation of Bighorn Sheep.

The Lannings use the meat they get from large game hunting. The ram they shot this year had a good number of knicks and chunks broken out of his horns. Some of this was likely caused by battling other rams. He also showed signs of advanced “sinisitus” a condition which can cause erosion of the frontal bone and thinning of the brain case that can result in the death of the animal.