Almost 11 months after January floods, work begins repairing two breaks in levees at a cost of over $500,000 from General Fund. 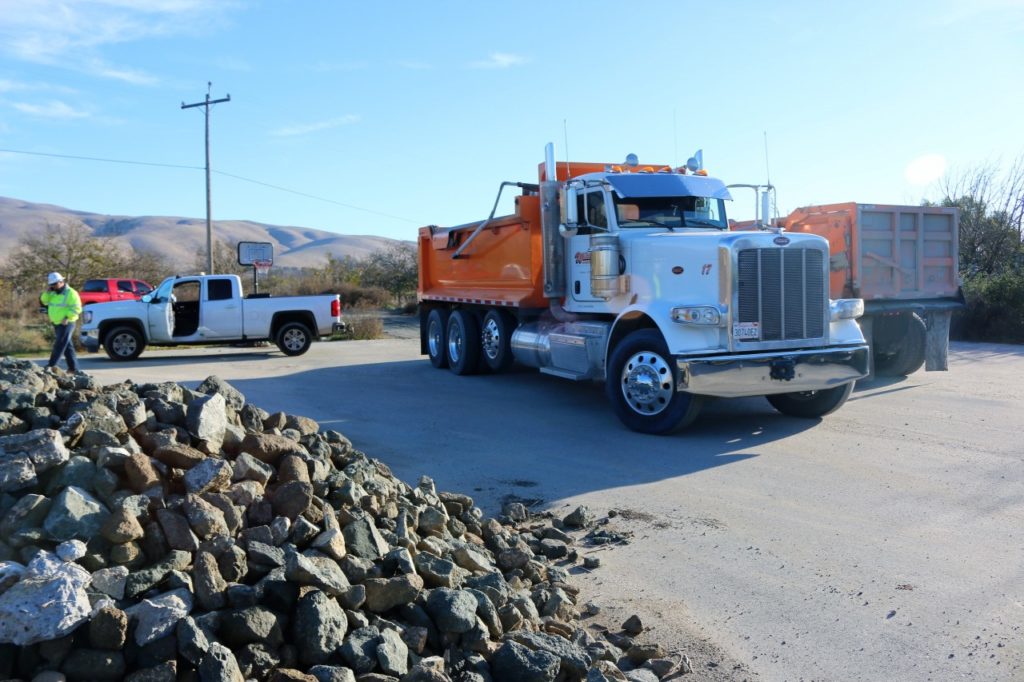 Eleven months after floodwaters broke through levees and raged across the Lovers Lane area of San Benito County, work finally began Nov. 30 to repair the two breaks before the rainy season.

The county approved $625,000 to do the work, of which a little over $550,000 will go into the levees, with the remainder paying for various other services, including a geoengineering firm’s recommendations on how to go about doing the job.

Winning the contract with the lowest bid, Graniterock Construction began hauling rocks from its quarry in Aromas and dirt from the John Smith Landfill, a decision on the part of the San Benito County's Resources Management Agency that saved the county over $100,000 and opened up more room for garbage going into the landfill.

Brian Ashford, project engineer for Graniterock, said rock was being brought in the first day in order to establish a firm base in the two breaks in the levees. Soil will be compacted to make sure it stays in place.

“We’re bringing in on this side (Dara Farms) about 3,000 yards of soil and on the other side (Chuck Lenzi farm) about 5,000 yards,” he said. “We’re anticipating it will take two to three weeks to complete, barring any unforeseen circumstances.”

Ashford commented that when the two breaches are repaired they will easily be the strongest portion of the levee system. He said if there were to be any future break it would most likely not happen there. While he could not say how long the company could, or would, guarantee the work, he said, typically, they guarantee their road work for a year.

BenitoLink walked with Kevin O’Neill, director of the county's Office of Emergency Services, along the Dara Farms side of the levee as he said the work had actually begun two days before, which he described as a “soft opening,” in which the engineers got the lay of the land and cleared some trees to make room for earthmoving machinery. He said there were two sites to be prepared directly across the creek from one another on the two farms.

“They’re starting on the north side because the south side needs more prep time because it’s a bigger break and there’s standing water,” O’Neill said. “They’ve got to dam up some of the water on the south side and start pumping it out. It’s just going to take longer than this one.”

O’Neill believes the water is coming from an artesian well and it will take some effort to get the larger of the two breaks dry enough to begin work.

Ever since the January floods, the county has been wrangling with the various government agencies to try to fund repairs on the levees and roads, particularly Lovers Lane, which was partially washed away. He said the two main funding sources are the county and FEMA. The $625,000 came from the county’s General Fund. O’Neal said the county is working with FEMA on road projects and debris removal, but getting any money has been slow. He said Caltrans is also in the mix to provide funding for road repairs, but, again, the process is staggeringly slow.

“The parts of Lovers Lane that were washed out will be reconstructed,” he said, making it clear that the entire road will not be repaired. He was hesitant to estimate how much FEMA money would trickle down to the county.

“I try not to throw out a dollar figure because the cost of the damage is not necessarily the cost of the repair, meaning Lovers Lane, prior to the floods, was not up to current standards, but it will have to be built to current standards,” he said. “And there’s a lot of unknowns until we actually get in there, in terms of engineering and grading. For example, if the road needs to be widened for right-of-way or easement purchases. All told, the total cost will be approximately $2 million.”

Before deciding to go ahead with the levee repairs, the board of supervisors attempted to get all the property owners in the area to sign letters of indemnification to hold the county blameless in case there was another break resulting in more flooding. O’Neill said that would have involved nearly 100 people. As it turned out, only the three landowners signed the letter in order to get the work started.

“The county decided it was most prudent to get letters from the people who actually owned the levees,” he said, “which would be Dara Farms property and the Lenzi property. The third property, owned by Bruce O’Conner, we’re using as access to the Lenzi property.”

The sticking point for both the landowners and the county is the need to clean out the creek bed, which hasn’t been done in decades, in the hopes of preventing future floods. The landowners have insisted flooding will surely happen again if the creeks are not cleared out.

The problem is, because of environmental or endangered species issues, the California Department of Fish and Wildlife is typically tightfisted when it comes to handing out permits to clean the state’s rivers and creeks. The landowners, Lenzi in particular, said he was more than willing to take his big bulldozers down into the creek bed to do the work if the state would allow it. A number of farmers complained during the various meeting leading up to the decision to repair the levees that years ago their ancestors kept the creeks clear and there used to be steelhead swimming in them. Not so anymore, though. The steelhead are long gone and the creeks are clogged with full-grown trees and brush.

When the board of supervisors approved the funds for the repairs, it was mentioned that the county’s Resource Management Agency should seek out a solution with Fish and Wildlife. Since RMA did not respond about the question before publication, it is not known how much progress, if any, has been made on that front.