Competition means a long day and stiff competition for an eight year old at the San Benito County Junior Rodeo. 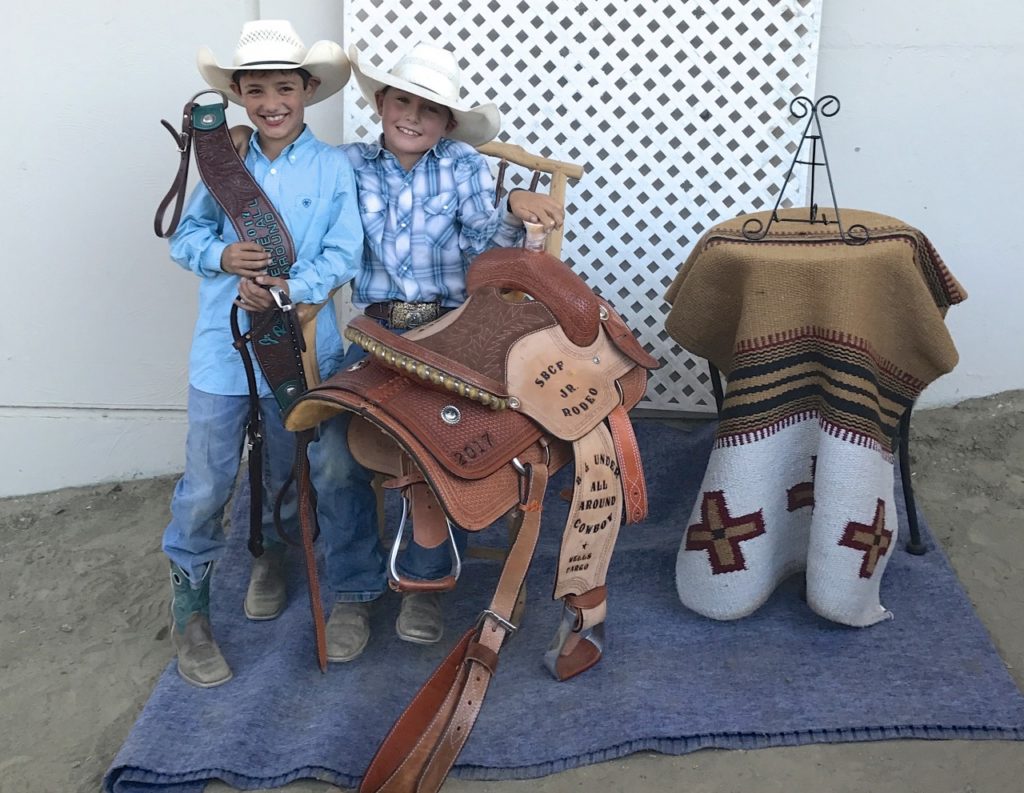 Gage Holzum from Oakdale, Calif. was at Bolado Park all weekend with his family for the Junior Rodeo. He was ready to go with his coat and “sunnies” at 7:00am.

First class, Gage got fourth in the barrel race but he was a little frustrated with himself. His dad gave him a little advice that helped. “He said do good and don’t beat myself.”  Gage explained that meant that he shouldn’t beat himself up for making small mistakes. As a fourth place winner, he got splint boots for his horse from McKinnon Lumber.

Then it was time for Pole Bending. That went pretty well and Gage came out of that class in third place, which got him a saddle pad donated by Shawn and Necole Bourdet and Randy and Rebecca Wolf. That was when he started thinking he might have shot at All-Round for his division, eight and under boys.

Gage’s parents, Tyler and Jennifer Holzum weren’t sure how the weekend was going to go. Gage’s horse, Thunder had just died of colic two weeks earlier and they had to scramble to come up with another horse and get it ready.

The next class was Goat Tail Untying. “I didn’t want to do it, I’m just saying,” Gage said.  He explained that he is almost nine and soon he can do Goat Tying, which he thought he was ready for now.

Gage and his new horse were doing well together and they got third in the Single Stake class. “I felt good about her. It was her first time doing it, so she did pretty well,” he said.

His new horse, a mare, is named Machine Gun. “Because I like guns,” he said. Gage wants to be “Swat” and if he can’t be that them he wants to be “Navy Seals”.  “But mostly I want to be a rancher like my dad,” he said.

He was neck and neck with Huston Harbert of Hollister at this point in the day. “We’re great friends," Gage said, letting on that they had just met for the first time that day.

Jennifer explained that she was happy to see her son doing so well. “He lost his horse just two weeks ago and he worked really hard to get her (Machine Gun) ready,” she said.

Finally it was time for his fifth event of the day and he came out of the Key Hole Race with the second place award which got him a bronc halter donated by Wells Fargo Bank.

Now it was time to see who won “All Round”, which meant a saddle donated by Wells Fargo. “I was thinking I was going to win,” he said, “but I was shocked though when they said me.” When they announced it, Gage went over and hugged his mom and dad. Looking back on the day, he described it as a “good time plus fun.” Huston Harbert won the Reserve All Round, with an award sponsored by Lomanto Harvesting.

This year had twice as many contestants as last year’s Junior Rodeo. Jennifer Holzum said, “It was such a nice event. The ground was good for the horses and they ran the event well.” Holzum really appreciated the setting of Bolado Park and said, “It was nice to come and see a lot of ranch kids entering the rodeo.” She felt that Gage had gotten a good life lesson over the weekend. “He worked hard and it paid off,” she said.

Leaving the rodeo grounds, with a new saddle and a pile of tack in the back of the truck, Gage got on the phone to talk to a rancher friend of his father’s, Pat Kirby. Gage helps out sometimes moving cattle on Kirby’s ranch.  “Well, Pat,” he said, “Working for you paid off!”  Gage said he is looking forward to coming back to the San Benito County Junior Rodeo next year and plans to keep coming “until he’s 21”.