Dick Vieira and Donnie Marcus on their last ride together. 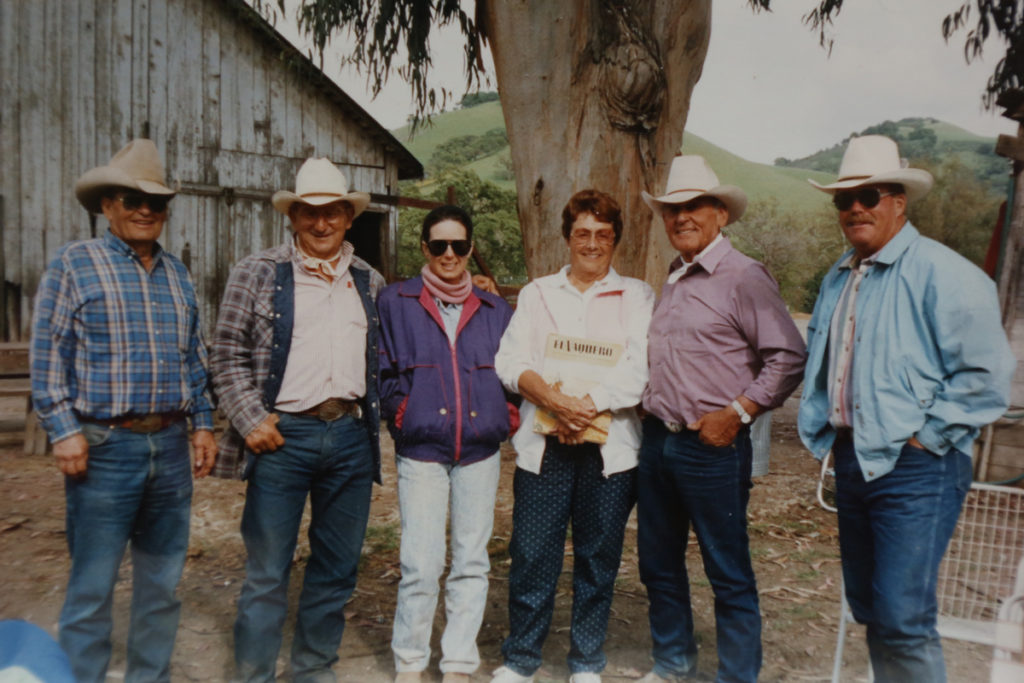 The San Benito County ranching community suffered a loss this week. Greatly admired by those still in the livestock business, Dick Vieira left this world with friends and family reflecting on how thankful they were to have spent time around him. Known as a lifetime horseman and stockman, Vieira died at home on Jan. 21.

Vieira grew up in the 1930s in the Santa Ana Valley, where his family raised apricots, walnuts and prunes. In those days, fruit trees and cattle were the county’s main industries.

When he was still young, his father decided to move to Hollister but Vieira’s heart belonged in the quiet and expansive hills of San Benito ranchland. Vieira lived briefly in Paicines with his grandparents, working on the ranch in Browns Valley that would someday become his own.

When he returned home from World War II, Vieira found work at the French Ranch. Raising his family on Comstock Road, he worked on other ranches, did day work and shod horses to make a living. He settled at the Hawkins Ranch and proceeded to work there for more than 50 years.

Vieira spent his whole life as a cowboy, working with horses and livestock and achieving a level of knowledge that is nearly irreplaceable today.

Vieira was actually Marcus’ uncle and the families are very close. “He gave me my first horse in grammar school, a young mare, and then after that I was able to ride with him on the ranches. I learned about ranching —all of ranching, not just the riding but building fence and the rest of it,” said Marcus appreciatively.

Vieira was a gentle man with a knack for teaching children, horses and dogs while gaining their absolute loyalty. His daughter, Trish Maderis said, “He didn’t demand much, but you always wanted him to be proud of you. He was very gentle but firm in a way that was never threatening.”

Maderis told BenitoLink, “Dad always taught us to ‘think ahead,’ whether we were working cattle, driving a vehicle or for life in general.”

As a young girl, Rebecca Medeiros Wolf’s father, Bill Medeiros, was in partnership with Vieira, so she spent a lot of time with her “favorites,” Dick and his wife, Carmen.

When Wolf got a little older, she loved to go with who she called her “second parents” to the Pfeiffer Ranch and stay in its old adobe house for several days, working cattle. “Dick was a crack-up and he could do anything, but he moved fast… like that,” she said snapping her fingers. “He worked hard but he was fun.”

Wolf said everyone coveted horses trained by Vieira because “he really took time with them.”

Being his nephew, Donnie Marcus lucked-out being in line for Vieira's horses. With so much in common, Marcus and Vieira competed and won together in team roping, calf branding and wild cow milking at Bolado Park for many years. Marcus admitted that because of his uncle, he always had the best horses. Marcus' daughter, Dana Hearne, went to the college national finals twice on Vieira’s “ranch broke” horses.

In an interview this week, local rancher Mitt French said, “I’d describe Dick as a cowboy’s cowboy. He developed great skills roping, branding, showing and training horses. A lot of people think that’s what a cowboy is. But what I mean is something more. When Dick rode through cattle, he saw things. He was quiet and careful around cattle. He recognized exactly what was going to happen next and where he needed to be at a precise time.”

French, who is the president of Las Aguilas Corporation and San Benito Cattle Company, said he felt Vieira took these skills to another level because he loved what he did. “That’s how you become that intuitive. You’re understanding livestock, thinking about it all the time because you really enjoy it and that’s why I call him a cowboy’s cowboy.”

In September 1999, at age 73, Vieira had the bad luck of having an accident on horseback and literally drowning on his Browns Valley Ranch while working cattle. Through good fortune and great effort, he was brought back to life. After three months in a hospital and then rehab, he had many more years in the saddle, which would worry his wife of 66 years, Carmen.

Eventually, Vieira and Marcus took a last ride together in the San Benito hills in 2010. When Carmen started having difficulty with her memory, Vieira told her, “You took care of me all these years, now it’s time I take care of you.” He continued to care for Carmen until the end.

Daughter Trish said, “He was a fun dad. Our parents were a great team, right to the end.”

In the early 2000s, a portion of the Hawkins Ranch sold but Vieira continued-on, helping out at the ranch. “Dick shared his hard-earned understanding of the running capacity of pastures and which springs dried up and which springs sustained for years,” French said of the transition. Speaking of Vieira’s unique and specialized knowledge, French said, “You could tap into Dick Vieira forever.”

Local reined cow horse trainer Ramona Koch said, “That group of cowboys are all gone. Dick Vieira, George Rose, Al Silva, Hugh French, Jack Kirby. They were the salt of the earth and they knew so much.” Koch said she felt  fortunate to be able to work beside them when she was younger. “They taught me how to handle cattle and I’m thankful for the years I got.”

For Marcus, Vieira's influence was life-changing. “Dick taught me a lot about life. Things like never quitting on a job, showing up on time, being truthful and having integrity.”

He told BenitoLink simply, “Dick exemplified a good human being.”

Marcus said of his uncle, “He always offered to teach what he could. I wish every youngster could be fortunate in life and have a mentor like Dick —someone you could look up to, admire and respect. He exemplified so many qualities.”

Vieira eventually traded riding his horse for driving a pick-up truck, but continued checking fences and the waters on the Hawkins Ranch up to his last few days.

On Saturday, Jan. 28, friends and family members are welcome at Grunnagle-Ament-Nelson Funeral Home in Hollister at 2 p.m. to pay their respects to Carmen and honor one of San Benito County’s great homegrown stockmen.