Hollister forum on art and culture draws a crowd 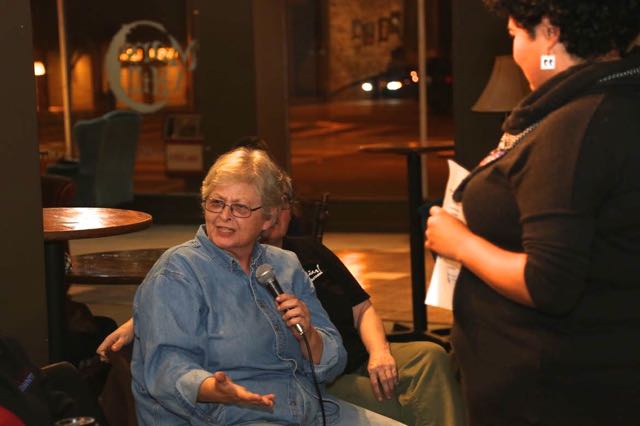 Escamilla posed questions about public art and culture in Hollister and San Benito County. She started off saying, “Tell us what you think about the public arts and culture in Hollister." Eleanor Escamilla, Rachelle’s mother, told the audience that “art is falling away” in public education and needs to be supported. She added, “If we want it [public art] here, we need to recognize that artists need to be paid for their work too.”

Hollister native Mirian Martinez enthusiastically said, “I would like to see alley murals, slam poetry, sculptures, rap battles, and art displays.” She added that public art is a key economic driver for local residents, saying, “Local people will spend locally downtown and go to businesses that they would not otherwise go.”

Eleanor Escamilla shared about a time in her life when she and her family had the opportunity to enjoy a variety of activities at Dunne Park. She said she would like to see something like that happen again, as she felt it would be good for the community.

When asked, “What kind of art would you like to see and where?” Sara Frias responded with another question, “Where do we as residents want to go?” She suggested that identifying those goals would help with the placement of public art. She also suggested having art near doctor offices and hospitals saying they would stimulate a positive environment.

Moderator Escamilla added that finding an identity, which reflects and complements the people of the community, is critical. She asked, “How do we as residents change this? How do we move concepts into reality? What role do we have in our community?”

Chris Sweeney, an independent computer programmer, suggested, “Think about the role of our organizations. We should be more diverse and hear from different voices of the community”.

Frias commented, “We need to grasp into our roots, going back to before this was Hollister, when this was Rancho San Justo and even earlier.” She went on to say, “We should learn about how Hollister came to be. We should learn about the homes from the 1700s and 1800s. We should learn about the culture of the Indians.” She suggested that historical buildings have plaques with information, including the year they were built, the type of structure, and the type of architecture. These things will tell a story of the real identity of the county and how this town was shaped, she said, suggesting a public art office that can be the central focus for interested individuals to explore our roots.

Escamilla agreed that the ideas of community residents could draw people into Hollister. “There is proven data that all public art, all of these things being talked about tonight, play an essential role in economic development,” she explained.

Gary Byrne, president/CEO of the Community Foundation for San Benito County, added to Burgillo’s comment, “If all organizations put it as part of their message then there will be a lot of diverse voices throughout the county supporting the arts.” Byrne provided an example of how it makes a difference when communities implement a public tax on all buildings, saying, “I was in Charlotte, North Carolina, not so long ago and the whole city was filled with public art. Twenty to 30 years ago, the city implemented a 0.05 percent tax policy on all new economic developments to go toward public art, through a public art ordinance. The ordinance also required that a certain percentage of a new building be painted with visual art. It was by far one of the most art-filled cities I have visited. Even the public restrooms had public art!”

Byrne agreed with a previous statement made by Martinez, saying, “Someone mentioned rap and that there is no way to express ourselves. We need community support for all.”

Moderator Escamilla asked the final question of the night, “What is the most important action that the city of government can take in regards to helping you reach your vision for public art?”

On his second meeting of the night, Hollister Mayor Ignacio Velazquez joined in the conversation and asked the group to stick together and attend their local government meetings. “I am an artist. Believe it or not, I used to be a photographer. I am passionate about art. But I am out-voted all the time. I am just as frustrated as you about our local government." He explained, “You need to come to meetings so they can hear what you are saying. When you talk about government, you are the government! So what are you going to do about it?”

Escamilla stated, “ The younger generation feels closed off from our government.”

Velazquez responded to the the crowd of art supporters, “Each of us is a constituent and each one has a vote. You need to help us get to the next stage.”

The mayor recommended to the crowd, “You need to show up at these meetings. Five or six people can make a difference with elected officials where they realize, ‘maybe we are missing something’ – that way real change can begin to happen.”

Escamilla summarized, “We want to continue on this movement.  We need to educate our organizations and public officials about all the benefits a community receives through public art. We need to stand together and unite our powers for the greater good of our art and our county.”

The group has a facebook page called Public Art and Community Engagement in Hollister, Ca

Contact Raul Ceja at the Community Foundation for San Benito County for more information about possible events related to discussion on public art. He can be reached at 636-1924.