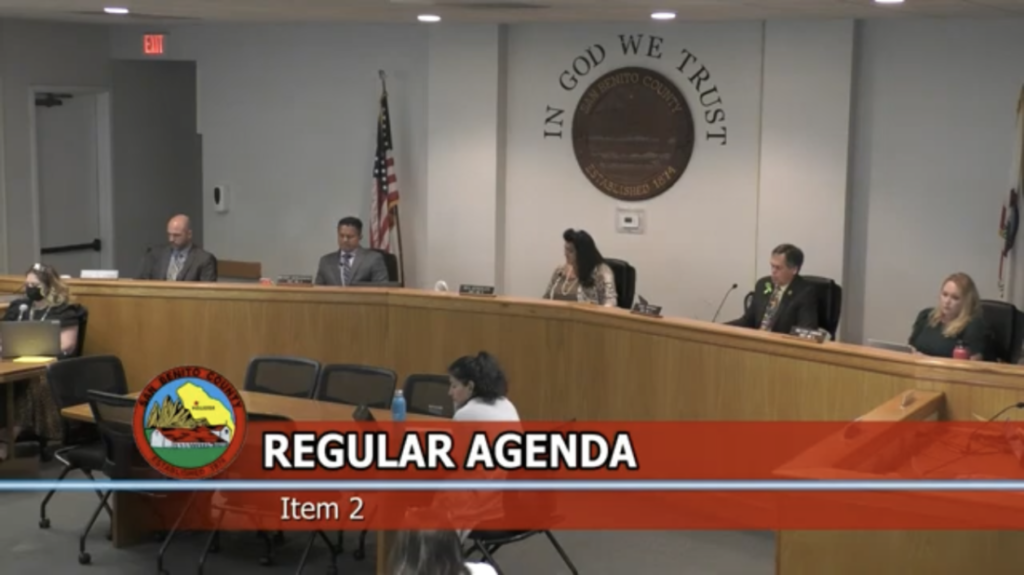 Editor’s note: This article was updated to correct an error introduced in the editing process that stated Supervisor Kosmicki supported the initiative.

According to San Benito County Supervisor Bob Tiffany, only one supervisor remains neutral on keeping decisions on commercial growth in unincorporated areas in the hands of county officials rather than the voters, as would be the case if a slow-growth initiative were to be placed on the Nov. 8 ballot and approved by voters.

BenitoLink reached out to each supervisor for their opinions on an initiative to slow both housing and commercial growth.

If the initiative were to reach the Nov. 8 ballot, and if it were to pass, 13 out of 16 nodes that were approved in the county’s 2035 General Plan would be eliminated and the decision on each new commercial development would ultimately be decided by voters rather than the county planning department or supervisors.

The one voice on the board against not only more housing in the county, but recently proposed commercial projects such as Strada Verde and projects along Highway 101 known as nodes, continues to be Supervisor Kollin Kosmicki.

When asked about the two related topics, Kosmicki said, “I look forward to a healthy community dialogue about this issue and have no further comment.”

Following the publication of this article he reached out to BenitoLink and added, “I don’t have a position on the initiative, I’m staying neutral,” Kosmicki said. “The voters can decide one way or another. Whatever the will of the voters is I’ll embrace that.”

His supervisorial campaign has been supported by Andy and Mary Hsia-Coron, who have been behind three similar initiatives, and he spoke in support of the group Say No on Measure K in February 2020 in San Juan Bautista when he was campaigning for the Board of Supervisors District 2 seat.

While running for supervisor he wrote a column for BenitoLink in which he criticized the people behind Strada Verde Innovation Park.

He opposed the project because of its “close proximity to the Santa Clara County line, the developer’s unwillingness to address inevitably massive traffic impact on Highway 25, arbitrary job numbers that are pulled out of thin air since no companies have actually committed to moving there, foregoing a vast majority of the environmental review process due to a loophole in election law, and the potential for housing being developed down the road by the housing developer behind the project.”

He continued: “On the whole, we’re not willing to get bamboozled again by developers. And to me, that’s the general theme of this entire election: Are voters ready to choose their own path—and elect candidates with viewpoints in line with the public—or will big-money special interests continue getting their way?”

Where the others stand

Supervisor Betsy Dirks, who said she consulted with the county’s attorney prior to speaking to BenitoLink, said she did not want to imply that voters don’t know what they’re doing, but she feels it’s important to understand the planning process.

“It’s important to have people whose whole existence is to pay attention to that information,” she said. “Hopefully, people who are elected to the position of supervisor and of overseeing the 2035 General Plan will be able to come up with developments that make sense for the county and help it prosper and grow in a way that brings benefits to everyone.”

The 2035 General Plan is the vision and official policies for how the county will grow into the next decade, taking into account land use and environmental concerns. It is the county’s long-range plan for the community’s future and guides day-to-day decision making.

Supervisor Peter Hernandez, who is currently running for the 18th Congressional District seat, said if the initiative were to pass “it would landlock the county.” He said the initiative system assumes the public understands what it is being sold. “The bottom line is whoever controls the narrative controls the outcomes,” he said.

He said it would be difficult to do any commercial development. “It’s disingenuous because the public is being sold on the impacts without being told these are not residential projects. These are revenue-generating projects,” he said. “If we don’t have revenue, we can’t fix roads or provide the correct amount of public safety.” He added it’s difficult to make informed decisions on a serious and complex process “based on a 30-second pitch from a person asking them to sign a petition.”

Hernandez said the initiative would devastate the county. “It would make it a slow and tedious process for one commercial development by pushing it to an election cycle,” he said. As for eliminating 13 of the 16 nodes, Hernandez described the effort as an “insidious push from somebody outside this county trying to keep our county from being successful.”

When asked for further details on who that “somebody” was, Hernandez did not respond.

“Why would you shut down commercial development and leave wide-open housing?” he said. “Commercial developments benefit the county, whereas a house, and here I would agree with Kollin, will cost more in the long run because we can’t keep up with the infrastructure.”

Supervisor Bea Gonzalez did not respond to repeated requests for a comment. She did, however, vote in support of greenlighting the project application for Strada Verde in March.

Tiffany has made no secret of the fact that he supports more commercial developments. He also said that the slow-growth organization Campaign to Protect San Benito’s proposed initiative would bring all commercial developments to a halt and damage the county’s efforts to attract new businesses for the next 30 years.

The Strada Verde project continues to push buttons on both sides of the growth debate. When the project was put on the 2020 ballot as Measure N, it was defeated.

In two scope meetings held in April, county staff said that a new environment impact study (EIS) would be conducted and explained why the county is proceeding with the EIS despite the defeat of Measure N.

Even though Measure N was defeated, California law has two separate processes dealing with land use maps. “It allows initiative measures to amend general plans, which is separate from the normal planning process under the planning and zoning laws, according to the county’s attorney Joel Ellinwood.

Measure N was an initiative put on the ballot by the backers of Strada Verde, a project made up of testing facilities and tracks to develop autonomous vehicles.

Tiffany said most communities want more local jobs and projects like Strada Verde. “Strada Verde will introduce high-tech jobs into our community,” he said. “If people want to support this initiative, they should do their homework because it will have an enormous impact on our county.”

He claimed the people signing the petitions are being told that more housing will be built near any commercial development, and by extension, will create more traffic. The Strada Verde project has no housing elements, he said. “I don’t know what development these people behind these initiatives would be in favor of.”