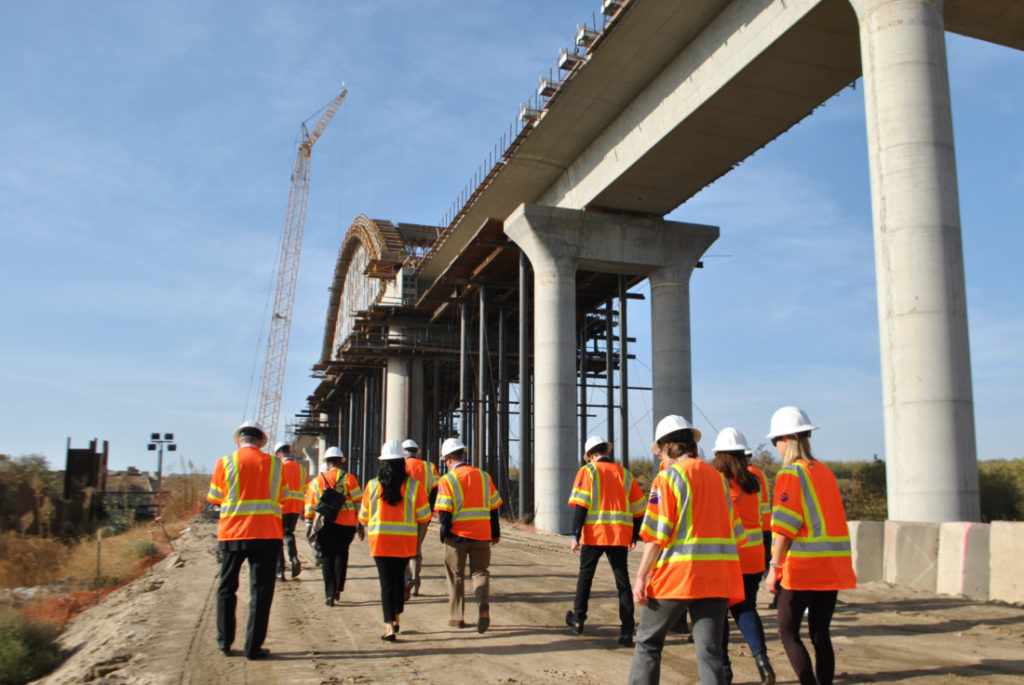 With the change in federal administration, the high-speed rail project linking San Francisco with Los Angeles gains momentum as it looks to restore federal funding from a grant awarded through the American Recovery and Reinvestment Act (ARRA) of 2009. Morgan Galli with the California High-Speed Rail Authority presented an updated business plan on March 10 to the Mobility Partnership between the Council of San Benito County Governments (COG) and Santa Clara Valley Transportation Authority.

The first construction phase of the project is the Central Valley’s segment from Merced to Bakersfield. Environmental documentation is complete for that 171-mile section. One-hundred sixteen miles of that section is under construction now between Madera and Bakersfield, and a 51-mile stretch from San Francisco to San Jose is also under construction.

The connection from Gilroy to Merced is planned to go through Pacheco Pass, but no station is proposed for San Benito County.

“The Gilroy station will be the closest station to Hollister in the high-speed rail system,” Galli said.

The route is planned to pass near the Highway 152/San Felipe Road intersection, according to an interactive construction map. An animated video of the proposed alternatives was created in 2019.

A maintenance yard is proposed south of Gilroy, Galli said.

COG Director and Hollister Mayor Ignacio Velazquez told BenitoLink the county did not advocate to the state to consider a station in San Benito County.

“When the process started way back then it started with the idea of Gilroy being that station because of how the line ran through Pacheco Pass, so we haven’t had that involvement,” Velazquez said.

Former San Benito County Supervisor Anthony Botelho, who served on the COG board, confirmed the county did not provide input to the state and that the community was only receiving updates on the project. He also said because the project passes through his property, he had to recuse himself everytime the high-speed rail was brought up.

With no station in San Benito County, Velazquez said he sees an opportunity for the county to connect to the Gilroy station as COG’s Local Transportation Agency conducted a transit study in 2020 that included a passenger rail.

“Now I want to take the next step and start connecting with the state for funding to actually do it,” Velazquez said.

COG Director Mary Gilbert was not immediately available for comment.

According to the high-speed rail’s draft 2020 Business Plan, the project is planned to eventually connect to San Diego, Sacramento and Las Vegas, operating at speeds up to 220 mph.

The project will cut travel time significantly, allowing riders to travel from San Francisco to Los Angeles in an estimated two hours, 40 minutes compared to over six hours by car and 11 hours by existing rail lines.

The biggest hurdle, even prior to COVID-19, is funding. The project is estimated to cost up to $98 billion. Gilli said the rail authority figures it will have between $20.6 billion and $23.1 billion available through 2030. It’s also estimated the Central Valley portion will cost between $21.3 billion and $22.8 billion. About $7.6 billion has already been spent.

According to a February press release from the High-Speed Rail Authority, the Federal Railroad Administration (FRA) has approved about $1.6 billion in state matching funds through the ARRA grant. The FRA will review an additional $64 million invoice package for work performed in October and November of last year.

In 2019, the federal government decommitted $929 million in grant funds from the project. That decision is currently in litigation.