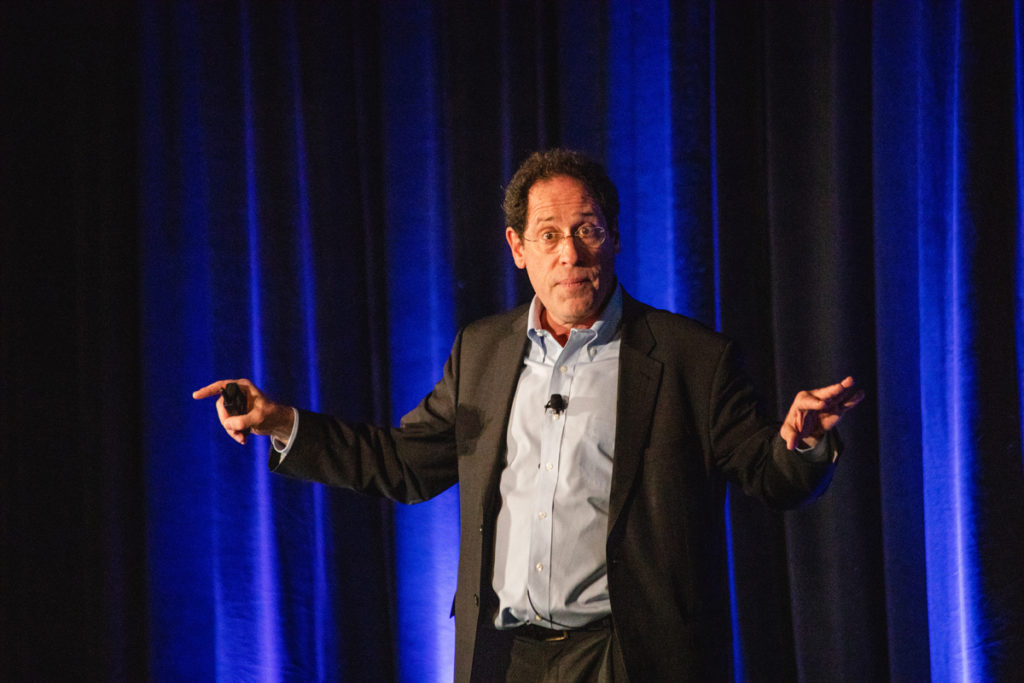 Featured speaker Bruce Katz suggested the Monterey Bay area look around the country and around the world for similar areas that have found solutions. Photo provided by Lucid Sound and Picture. MBEP hosts two events annually, one in the spring and the other in the fall. Photo by Leslie David. The Spring 2019 Monterey Bay Economic Partnership Summit held an even deeper conversation than last year about how to make Monterey, Santa Cruz and San Benito counties into a more dynamic economic region and still protect the local character that residents appreciate. Author Bruce Katz and Bruce Taylor with Taylor Farms both discouraged dependence on state and federal government funding. They also agreed that regulation is thwarting innovative solutions.

Katz introduced a little known, 2017 tax law that could help with redevelopment. Taylor was honored for providing a shining example of how for-profit, nonprofit and government agencies can get things done when regulations don’t dominate solutions.

Monterey Bay Economic Partnership (MBEP) is a regional nonprofit organization consisting of public, private and civic entities located in the three counties. Now in its fifth year, MBEP put its best foot forward from day one by including San Benito County in the regional discussion. Unfortunately, San Benito County elected officials have had a hard time making it to the summit and being part of the conversation. This spring, there are signs that attendance by San Benito representatives is improving.

Keynote speaker Katz is a Brookings Institute scholar and coauthor of The New Localism: How Cities Thrive in the Age of Populism. According to MBEP, he is an “advisor to global leaders” and the founding director of the Nowak Metro Finance Lab at Drexel University. Despite the fact that his focus is primarily on cities and less on areas that are a combination of rural and urban like the tri-county region, Katz urged the audience to take on the challenge and responsibility for their region’s future. He discouraged seeking funds from state or federal government, saying that with the delivery of a check, counties relinquish local control to the larger government body. Control means new regulations and, he said, “Your rules are getting so restrictive already. It’s like you are going to your parent asking for help.”

Katz introduced the audience to a new localist tool called “Opportunity Zones.” This is a 2017 federal tax benefit intended to make use of local capital for business projects in areas that need it. Katz said former Gov. Jerry Brown selected the zones for California.

Katz described the Opportunity Zone concept as a unique political hybrid. Instead of  government funding redevelopment projects and, as he put it, forcing counties to do it all their way, this tool brings in the private sector in a way where funders can avoid paying capital gains by investing in their own communities.

Opportunity Zones are not the same thing as “opportunity nodes,” which have been under discussion in San Benito County since 2015. Those are commercial sites planned for major transportation corridors, like Highways 101, 156, 25, and 152.

Katz said there is value in exploring what other cities and countries are doing that is working. He recommended the Denver area as a possible model, with its urban and rural communities. Urban has to allow rural to be at the table “because they need each other.” He also pointed to Denmark, which he said does a good job of “dealing with the missing middle” economic brackets. He said Americans “don’t really get out much” and learn from others.

This has been the case with San Benito County when it comes to the Monterey Bay Economic Partnership. San Benito County elected officials don’t get out much, including attending the MBEP Summit, but this year was different. San Juan Bautista Mayor Cesar Flores and county supervisor candidate Wayne Norton attended the event. This was made possible thanks to MBEP board member and San Benito Health Foundation Executive Director Rosa Vivian Hernandez, who provided a table.

Bruce Taylor, CEO and founder of Taylor Farms, was introduced at the summit as “a leader who walks the walk.” He is credited with a public-private partnership called the Taylor Farms Family Health and Wellness Center. In 2015, he donated $1 million to the Salinas Valley Memorial Hospital Foundation to build a wellness center in Gonzales. In partnership with Dr. Christine Ponzio, they established a modern health center to serve the small agricultural community.

Taylor Farms recently purchased Earthbound Farms, which has a location in San Juan Bautista, from the French conglomerate Danone. He said his company operates in 18 to 20 cities, a few of which are in Mexico.

Taylor also spoke about the difficulties that agricultural businesses face. He said that regulations are strangling business and that “you can’t afford to be a smaller farmer today.” He said that, as a farmer, he needs to deal with 82 agencies every year.

In 2015, Taylor moved the Taylor Farms headquarters to downtown Salinas as a way to help improve the downtown area. But “legislators put roadblocks in the way,” he said, noting that it took nine months to buy a parking lot. “We need to remove these impediments.”

Taylor supported Katz’s earlier statements, saying “Don’t be looking to Sacramento” to solve regional issues. He said government agencies should “help enable our success and stop telling us what to do” and that local leaders shouldn’t “delegate problems up.”

Both speakers complained that over-regulation is causing harm when it comes to innovation and renovation of neighborhoods. Still, they insisted that working with neighboring communities is key and that the focus should remain local to achieve regional goals.

MBEP hosts two events a year, one in spring and one in fall. Their current initiatives cover transportation, housing, technology and workforce development.