The R.E.A.C.H. and BenitoLink Moonlight Walk was well attended by families and adults wanting to take advantage of free, safe adventure. 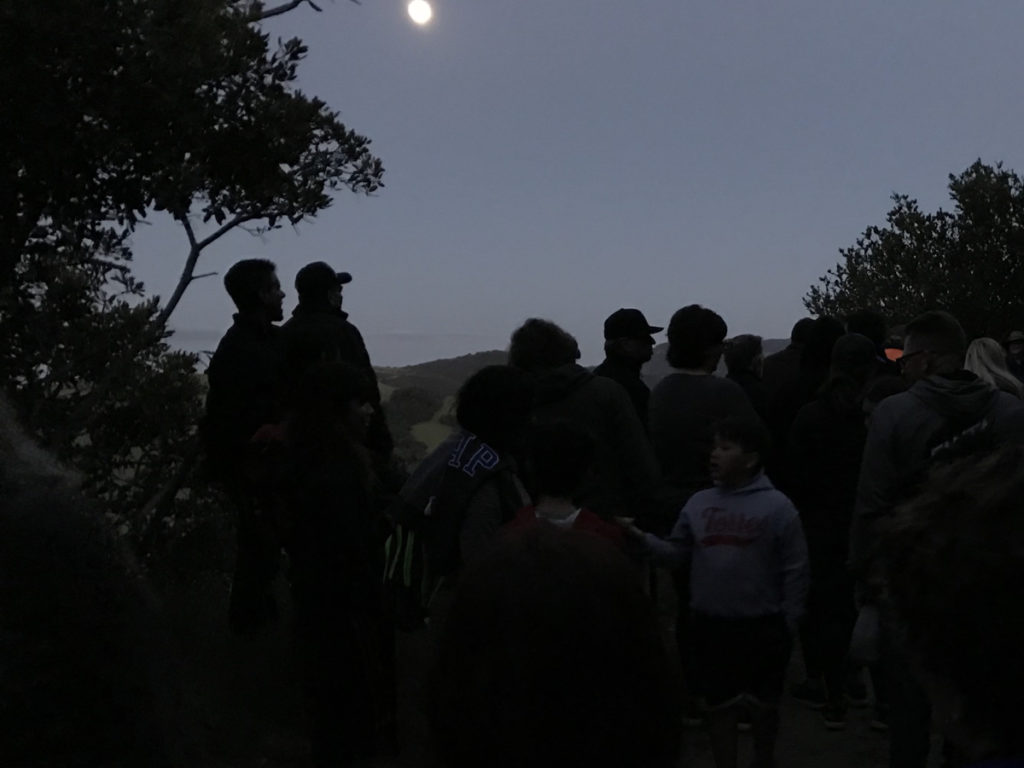 Some walkers went back as soon as the sun set, others waited until the full moon was the primary light source for the walk back. (Photo by Leslie David) Over 100 people attended the BenitoLink and  R.E.A.C.H.: San Benito Parks Foundation Moonlight Walk on De Anza Trail Saturday, April 28. Jim Ostdick, author and producer of the BenitoLink series “Walking San Benito,” was there to answer questions and give a short talk on the moon. Despite a cloudy afternoon, the sky cleared and the breeze dropped as the full moon came into sight.

“You and REACH knocked it out of the park for attendance- that nods to local residents!” wrote Mary Paxton in an email afterwards. She attended the walk with her husband Mark.  “When is the last time that 100+ people came to something to discover a place?" she asked.

"I thought it was pretty phenomenal," said Rolan Resendiz, a R.E.A.C.H. board member who also attended the event.

Community members signed up for the free event online and met at the base of De Anza Trail in San Juan Bautista around 7:15 p.m.. Walkers signed a release and were offered information on R.E.A.C.H., BenitoLink, and the history of De Anza Trail. The majority of the guests were from San Benito County, but several families came from Salinas, Aptos, and other outlying communities.

Small groups set off on the trail, taking their time, gradually climbing up the hill, and gathering at the overlook just beyond the first mile marker. Resendiz came with a group of about 15 friends and family to enjoy the atmosphere of an evening outing.

"It had a whole different vibe. I think people felt nice and secure…it was fun!" he said. "We were walking and chatting with everybody."

The hike was short and somewhat strenuous, but folks of all age groups made it to the top. Retired teacher, writer and avid walker Jim Ostdick greeted walkers at a rest point with an outstanding view of San Juan Valley. Ostdick is the author of BenitoLink's 24 article series “Walking San Benito”, which introduces readers to the wide variety of walking trails throughout the county.

De Anza Trail was named after Juan Bautista de Anza who set off from a town south of Alamos, Mexico in October 1775, eventually traveling through San Juan Bautista and arriving in San Francisco July 1776. What was once a footpath became De Anza's route, then a stagecoach road between San Juan Bautista and the Crazy Horse Road area of Prunedale, which contiued on to Salinas.

Ostdick took a few moments to point out the full moon and used some of the children on the walk as models to demonstrate the moon’s orbit. Ostdick is a retired science teacher and author of several books, including his recently published Palomino Nation: My 2016 Crazyass Walk Across America, about his cross-country trek last year.

"Jim was such a natural teacher and the kids were in awe of him," Resendiz said.

Paxton wrote, “Jim asked people to name ‘the moon’ something more special just for us SBC residents. John Williams suggested "Conejo", which means rabbit in Spanish because if you really look at the full moon you can see the rabbit ears on the upper right side, the body in the middle, and the tail on the lower right.” One of the kids suggested a common name like “Burt” which got a good laugh. “It was so much fun to hear Jim ask questions and watch the arms of all of you pop up to answer his questions related to the moon,” Paxton wrote.

About 20 to 30 of the walkers stayed long enough to experience the light of the full moon and walk under its glow, heading home.

Mary Paxton wrote, “People on the trail we walked near relished the beauty of the trail, the sunset, discovery. This was a shared experience for people of all ages. The climb was hard for some people. This speaks to an untapped recognition of a thirst to celebrate and explore and enjoy the richness of the special place we live.”

"I think the experience of seeing the moon rising while the sun was setting in the crisp evening air was very spirit lifting and awe-inspiring for most people there," said organizer and R.E.A.C.H Board Chair Valerie Egland. “I think that the whole experienced exemplified the Parks Location Guide theme:  Explore, Adventure, Refresh and Play!" Egland went on to say, “Gratitude was everywhere. People came back from the Moonlight Walk on De Anza Trail, exhilarated, in awe, and thrilled with the whole experience."

The groups plan to organize more walking events, perhaps on a quarterly basis and will announce when and where the next one will be held.

About R.E.A.C.H.: San Benito Parks Foundation was established in 2012, by San Benito County residents, to facilitate a healthy community through the preservation and enhancement of parks, facilities, and recreation programs in San Benito County. The Foundation works in partnership with a diverse variety of public and private parks and recreation agencies to fundraise and seek grants to enhance services, complete capital improvements, and expand accessibility to programs and services for all residents of San Benito County. Call (831) 601-5154 if you have questions.

About Jim Ostdick: Jim is a retired teacher and author who has resided in San Juan Bautista since 2005. His primary interests are energy conservation, outdoor recreation, and human-powered travel. An avid hiker and bicycle tourist, Ostdick has backpacked the Pacific Crest Trail from Mexico to Canada (2009), bicycled the perimeter of the lower 48 United States (2013-14), and walked from the Atlantic coast to the Pacific coast (REACH Across America, 2016). He is the author of Palomino and the Dream Machine: A Retired Dude's Bicycle Tour Around the Lower Forty-Eight United States (Amazon.com, 2015) and Palomino Nation: My 2016 Crazyass Walk Across America (Amazon.com, 2017). He is a dedicated Adopt-a-Highway volunteer and served on the board of the R.E.A.C.H. San Benito Parks Foundation 2015-2017. Email jim.ostdick@gmail.com Palomino Dream blog Palomino and the Dream Machine  and Palomino Nation

About BenitoLink: BenitoLink.com is a nonprofit news and information website serving San Benito County residents. Our mission is to help foster an informed and engaged community and be the most trusted source of news for our county. The website has been operating since 2012, starting as a project of the Community Foundation for San Benito County and becoming a separate 501(c)3 in 2015. BenitoLink is designed to provide consistent coverage of local government, our elected leaders, and regional news. BenitoLink publishes original content by professional reporters and photographers on a daily basis. It also welcomes community content, making the nonprofit website the community's informational town square and a place for civil conversation and nurturing the interaction of ideas.