Holiday Inn Express will be the second hotel on Gateway Drive. 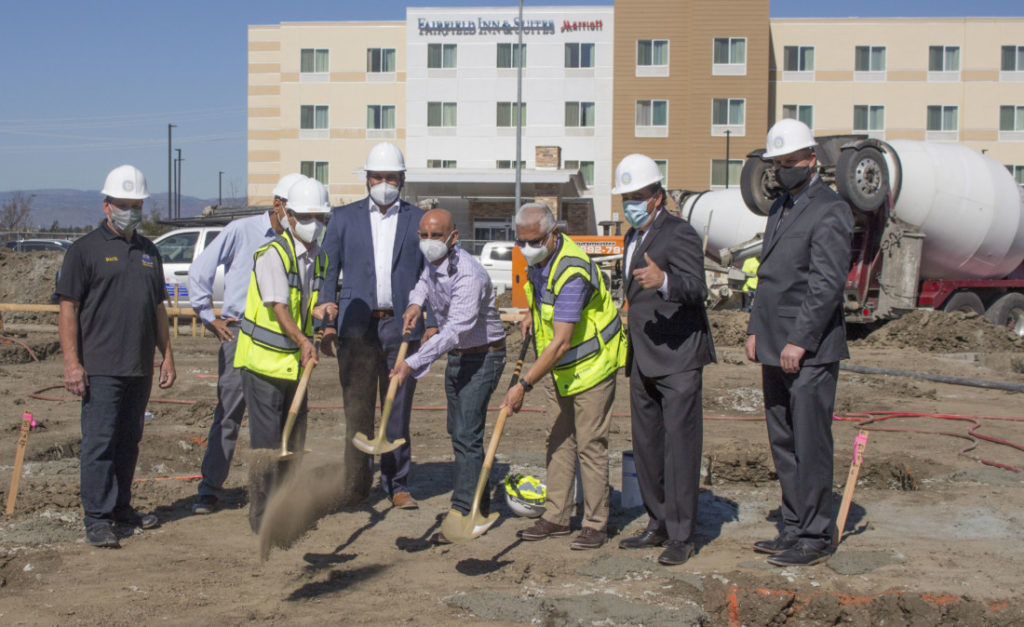 Representatives from Hollister and Lotus Management Inc. at the Feb. 24 groundbreaking for a new hotel on Gateway Drive. Photo by Noe Magaña.
×

As workers pumped cement into trenches, developers and representatives for the city of Hollister and San Benito County Chamber of Commerce held a groundbreaking ceremony for a new hotel located at 391 Gateway Drive on Feb. 24.

The Holiday Inn Express is a four-story, 93-room hotel that will include an indoor pool and a gym. It’s being developed by Lotus Management, Inc, the same company managing the Fairfield Inn by Marriott across the street.

Hollister Mayor Ignacio Velazquez said the project is a result of the city’s Hotel Incentive Plan, which uses Transient Occupancy Tax rebates to incentivize hotel development in the city.

“That is what gave the banks confidence to loan,” Velazquez said. “Taxpayers don’t have to put any money in, yet they are getting a return from this. That’s what we’re doing as a city at the retail level, here at the hotel level to incentivize.”

Lotus Management President Prakash Patel said despite the challenges of securing a loan for the project and the COVID-19 pandemic, construction began in January. He expects the hotel will be completed by the end of the year. He said since opening the Fairfield Inn across the street in 2017, Lotus Management saw the demand for another hotel.

Rakesh Patel, director of development with Lotus Management, said the project is being managed by Hilbers, Inc. It’s the second time they have contracted with Hilbers because it delivered a similar project in Chico on budget and ahead of schedule. He added that the Holiday Inn will be a replica of the Chico project.