The former Haybaler discusses his roots in the region and what he would bring to the bench. 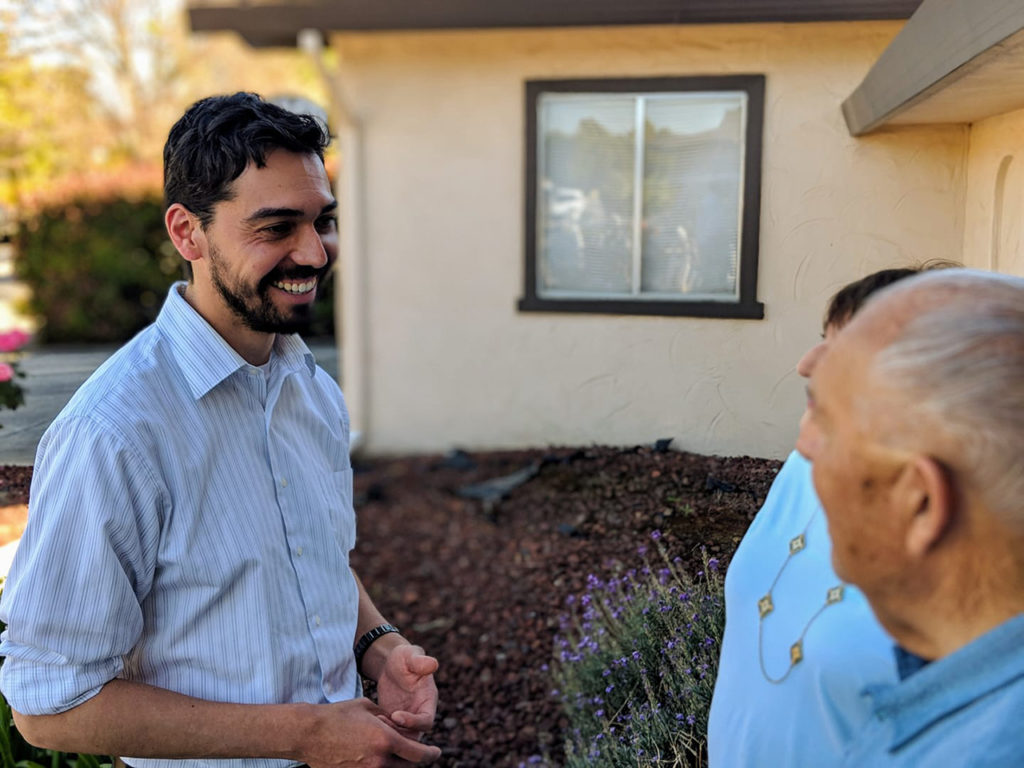 This article was contributed by Danielle Smith.

“Over and over again, I have found myself doing something I once ruled out,” said San Benito County Judge candidate Jose Omar Rodriguez. “I never thought I would be an attorney, but I wound up in law school. I never thought I would be a prosecutor, or even a litigator, because public speaking didn’t come naturally to me. But I knew I wanted to affect positive change in my community, so I went to law school to acquire the tools to do that.”

A bid to sit on the judge’s bench is the latest in a long run of moves for the Hollister native that once seemed unlikely. It’s a rare opportunity, to be sure: there are only two judge positions in the county, and this is the first contested election in 18 years. However, his may not be the first face that comes to mind when one imagines a superior court judge: mid-thirties, sharply dressed, kind eyes bagged slightly from early mornings spent chasing a toddler around the living room. Rodriguez loves Hitchcock, but has a soft spot for The Avengers.

He has heard the concerns about his age, but argues that his unique perspective makes him a strong candidate.

“To start serving as judge next year means being able to invest long-term in our court system,” Rodriguez said.

A push to bring electronic court case access to San Benito County is one of the ways Rodriguez hopes to make a sometimes daunting legal system work more effectively for residents.

“When it comes to issues like improving access to our courts or advocating for more resources to ensure our county’s legal system is adequately funded, we need a judge who will work with urgency and is in it for the long haul," he said.

Rodriguez is in San Benito County for the long haul. He traces his roots in the region to his paternal grandparents, who immigrated from Mexico and settled in San Juan Bautista to work the valley’s rich farmland. Rodriguez’ father, Jose, was one of 12 children and began working in the fields when he was five years old. In those same fields he would meet Emma Haro, an immigrant from Jalisco, Mexico. Their first son, Jose Omar Rodriguez, was named after his father and grandfather. To avoid the confusion of three Joses in the family, his parents took to calling him by his middle name, Omar, a nod to Doctor Zhivago’s Omar Sharif.

Rodriguez thrived in Hollister’s public schools; he was a part of the first student cohort at Marguerite Maze Middle School and played baseball for the Balers in high school. Unsure about his academic path, he started at Gavilan College — the first in his family to pursue higher education. At Gav, he had a transformative experience in an Ethics writing course.

“It was the first time I was really asked to think deeply about the interplay of laws, government and questions of right and wrong,” he said. “It really opened my eyes.”

Rodriguez transferred to the University of California, Berkeley in 2001 as a Legal Studies major. He would continue his education at Berkeley through law school, an experience to which he credits his decision to go into public service.

“A professor of mine once said that as an attorney, you have a license to do damage,” Rodriguez said. “What he meant is that when you have a law degree you can go out in the world and make significant changes — and you can do something good with that power or do something that will affect people negatively. The classes I found most interesting were the ones where I could see myself using all of these new skills to help people in day-to-day situations.”

“The job of a prosecutor is to make sure that each case is handled fairly. I had the discretion to deal with a case based on its unique facts,” Rodriguez said.

For three years, Rodriguez handled all juvenile cases in the county, from the mischievous to the very serious. The job was challenging, but working in his own community allowed Rodriguez to bring unique insight to the table.

“Professionally, you appreciate each party’s unique challenges — law enforcement, probation, the parents,” he said. “But at the same time, I grew up here, and these young people remind me so much of the kids in my neighborhood or at school. How would you want them to be treated? You want to set them up to accept responsibility for their actions, but also to choose a better path.”

Talk of county layoffs in 2012 compelled Rodriguez to transition to civil private practice in Aptos, where he worked on complex cases in contract, property and civil rights law and represented local government entities and businesses.

Paul Marigonda presided over many of his cases during this period. He joins a chorus of his fellow judges from throughout the region in heartfelt endorsement of Rodriguez.

“Omar Rodriguez will be an excellent judge for San Benito County because he has a wide range of experience in the courtroom and handling complex litigation," Marigonda said. "He will be a dynamic leader in the San Benito Superior Court.”

“Working in civil law made me appreciate how criminal court is not the final word — it can result in future litigation that impacts many more people,” Rodriguez said. “It was satisfying work, but it made very clear to me that I wanted to get back into public service full-time.”

In 2014, he did just that. As Assistant Counsel for the County of Santa Cruz, Omar ensures that natural resources are used responsibly and advises public agencies on legal matters.

“Every day I have the opportunity to serve the public by taking on a challenge and working to get the best and most just results,” he said. “At the end of the day, the true test is that if a member of the public asks me about a case, I’m able to look them in the eye and say ‘this was our decision, and here’s why it was best for the community.’”

When Rodriguez and his wife Amy welcomed their first child, Jimmy, at the end of 2016, he became reinvested in finding a way to serve the community where they would raise their son. Given his wide range of experience and track record of public service, friends and colleagues encouraged Rodriguez to run when a judge’s seat opened up in San Benito County last spring. Though it was his first foray into running for office, he quickly assembled a grass-roots team and beat out two other candidates for the position in June, moving on to the November run-offs.

Ultimately, Rodriguez sees the judge’s bench as an opportunity to ensure that the community four generations of his family and friends have called home is a safe and equitable place today and in the future.

“It’s easy to be cynical and say the person who can afford the most expensive lawyer is the one who is going to win in court,” he said. “But I’ve seen first hand that isn’t true. A judge who can ask the right questions, discern which evidence is appropriate, and work well with all parties –regardless of the representation you can afford, you can still get a just and right outcome. When people enter my courtroom, no matter what the outcome is, they’re going to know they had an opportunity to be heard.”