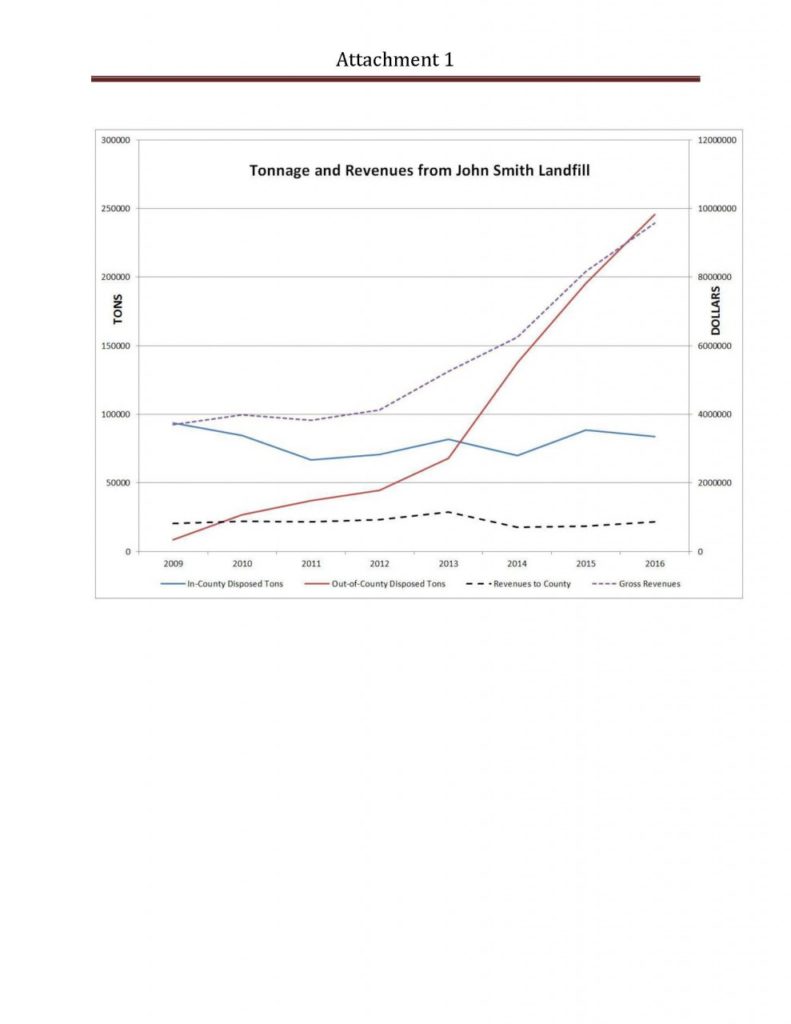 Implementing what amounts to a backdoor tax, San Benito County used an agreement with Waste Connections to divert $4.8 million of rate-payer enterprise funds and other payments to the county’s General Fund in exchange for in-kind assets from the Landfill-Solid Waste Enterprise.

In addition to diverting the funds, the county’s own internal documents reveal that it failed to take adequate actions to protect the local landfill capacity, address the transportation impacts (air quality, traffic, road maintenance and litter), or obtain a net revenue increase from accepting up to an added 750 tons a day of out-of-county waste, which was the agreement’s original primary purpose.

The story begins at the conclusion of county budget hearings for fiscal year 2010-11 when the county faced a $4 million deficit in its General Fund. Desperate for revenue to make up the shortfall, the Board of Supervisors' eyes turned to the John Smith Landfill.

At that time, the landfill was accepting 250 tons a day of waste for disposal on average and the county was receiving 20 percent of the gross landfill revenues, which came to $800,000 a year, the equivalent of $8.86 per ton. With expenses of $788,200 the landfill, was generating an annual net revenue of $11,800.

The county wanted more revenue even though it did not have more landfill expenses; they especially wanted access to the landfill’s Closure/ Post-Closure Funds, then valued at $4.2 million, and they wanted to reduce the $400,000 amortized annual payments that went into that fund and to the regional agency.

Closure/post-closure funds are legally required to close the landfill and monitor it for decades thereafter. The funds are typically acquired on a pay-as-you-go basis as the landfill is used. Part of your waste disposal bills went into those funds directly or indirectly.

The county’s problem was that the rates for the landfill enterprise were tightly controlled legally in that they had to be related to costs, they could not just raise the rates to collect money for the General Fund; that would be a tax and taxes need voter approval. They had to come up with a novel way to keep the rates high, but pass off costs for more revenue and convert the fund and payments into General Fund money.

They knew that the landfill operator, Waste Connections, was interested in greatly expanding its ability to take in out-of-county waste for disposal so the county “sold” capacity to take up to 1,000 tons of out-of-county waste per day at the severely reduced price of $2.50/ton (effectively only 28 percent of the previous rate), provided Waste Connections would retroactively take responsibility for the closure/post-closure funding then and into the future and expand the landfill.

The county then pocketed the existing fund, now worth $4.8 million, and the $400,000 a year in amortized payments in exchange for the added capacity. Meanwhile the county rate-payers did not receive credit for the $4.8 million fund balance or a rate reduction to offset the annual payments now paid by Waste Connections.

To add insult to injury, the county has since discovered that in spite of an enormous increase in the out-of-county waste tonnage disposed, and skyrocketing Waste Connection gross revenues to almost $10 million, the reduced rate resulted in no actual increase in revenues to the county (which does not even acknowledge the $4.8 million it diverted from the rate-payers as income).

Therefore, the landfill is taking in 16 times the total annual out-of-county waste that it did in 2009, but the county’s net return has stayed almost flat in dollars; when corrected for inflation, the revenue may actually be less than it was in 2009.

Meanwhile, the transport of those nearly one-quarter million tons of out-of-county waste annually wears the roads, increases traffic, pollutes the air, adds noise and litter and shortens the life of the landfill for no net return. County documents originally recognized these serious undesirable impacts, but failed to put any funds aside or develop a program to mitigate them.

There are too many variables to predict, exactly, the impact of the heavy truck traffic, but most formulas use a single heavy truck trip as equivalent of between 250 and 1,000 car trips in road wear. The landfill takes 1,900 commercial vehicles a month.

The county’s failure to include the cost of mitigation in its financial analysis is a serious error because local residents had brought the issue to their attention several times.

This is the kind of blind disregard for fundamentals that comes from chasing dollars regardless of true and long-term cost to the residents and ignoring repeated public warnings that you can’t get something for nothing.

Now, the county is trying to get Waste Connections to renegotiate the agreement, but to make things right, the county also needs to return that $4.8 million it pocketed to the landfill enterprise fund where it belongs and use it to pay for mitigating its own errors. That money and the $400,000 annual transferred responsibility belongs to the enterprise and rate-payers, not to the county’s General Fund.