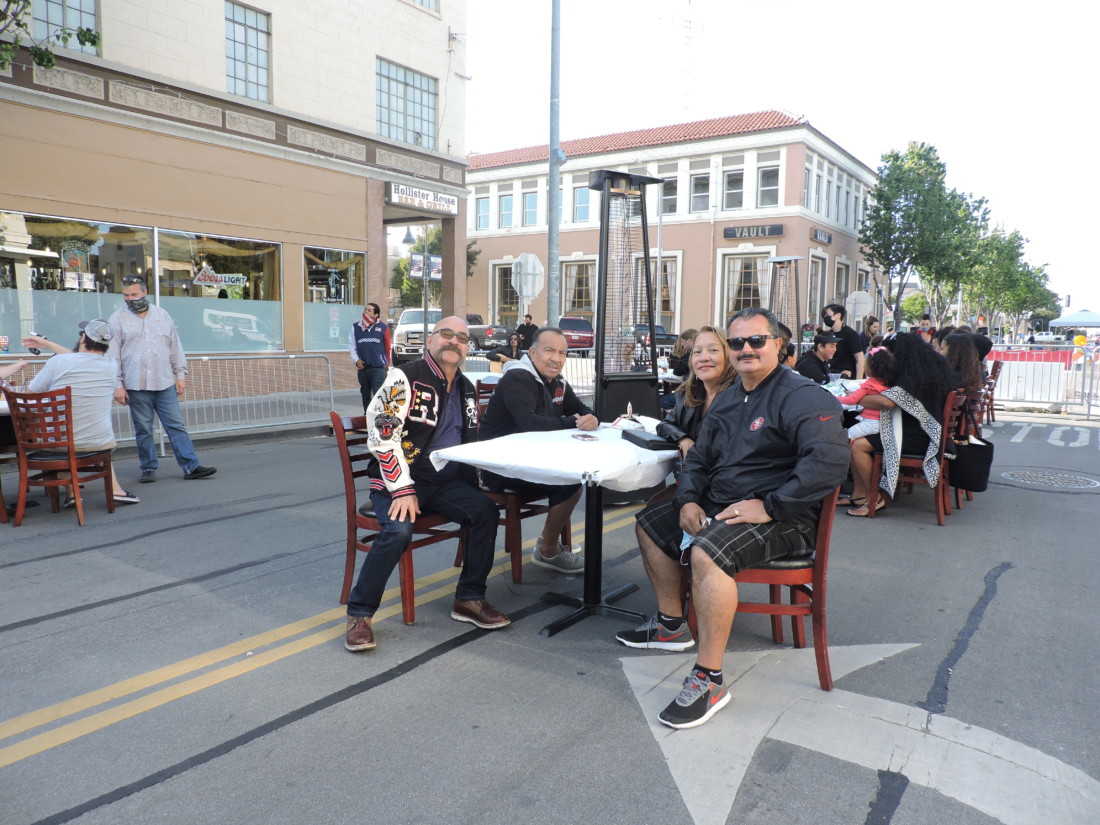 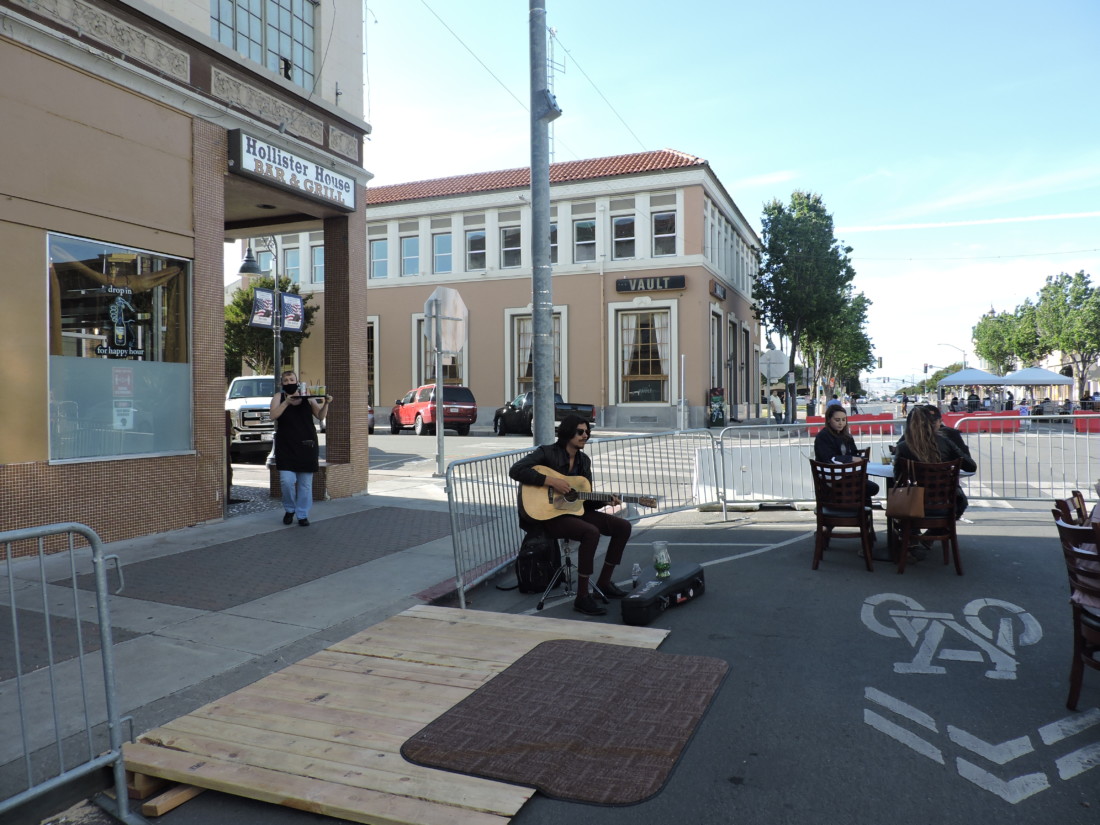 A server comes out with a full tray of drinks for customers at Hollister House while local musician Zack Freitas serenades outdoor diners. 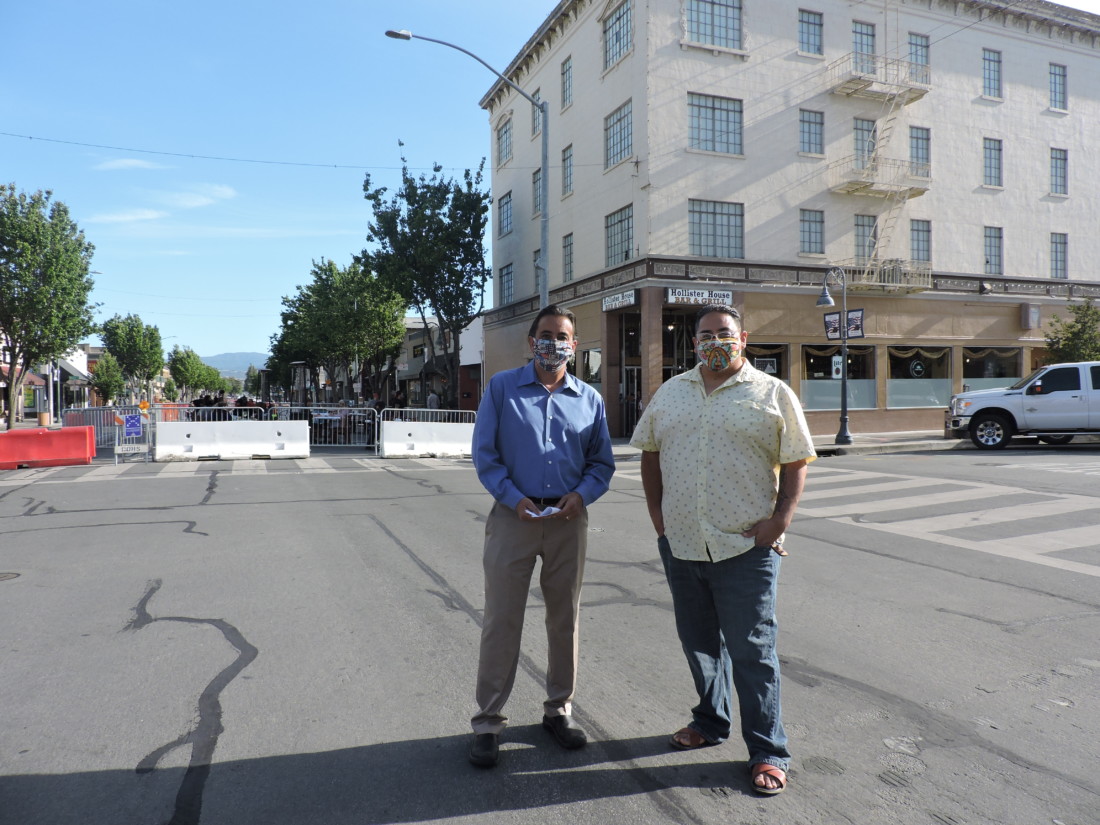 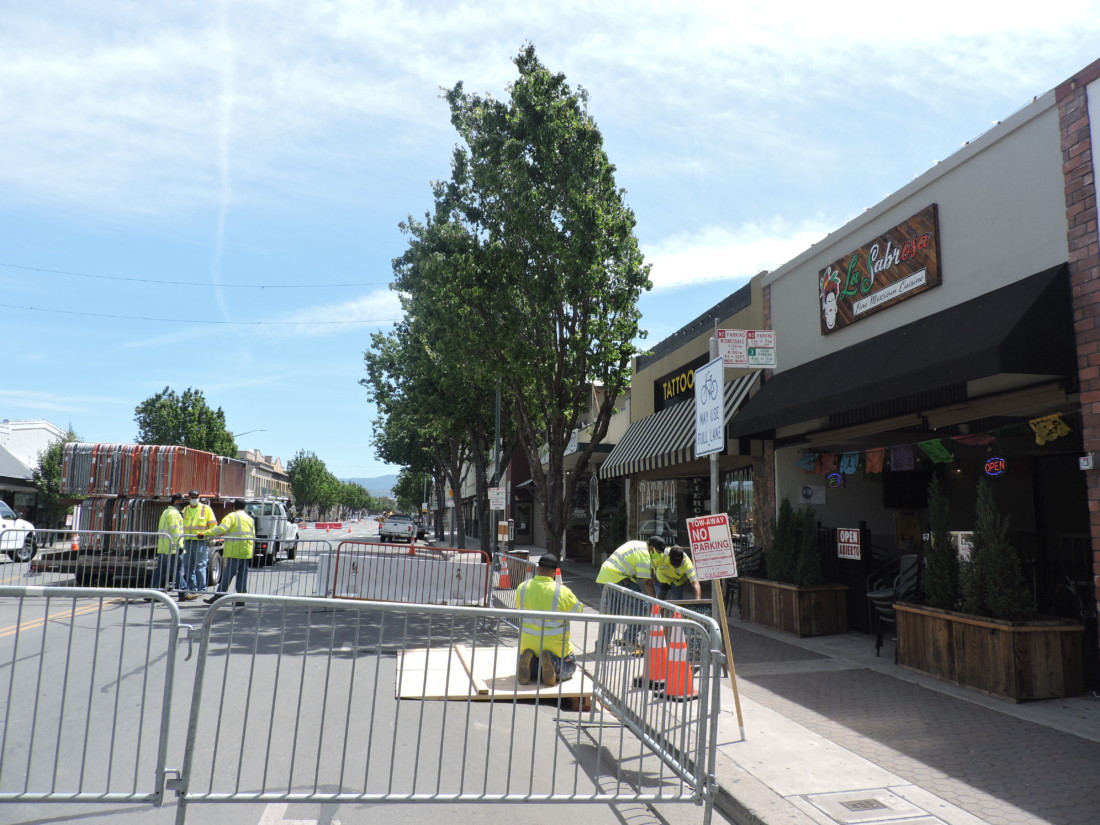 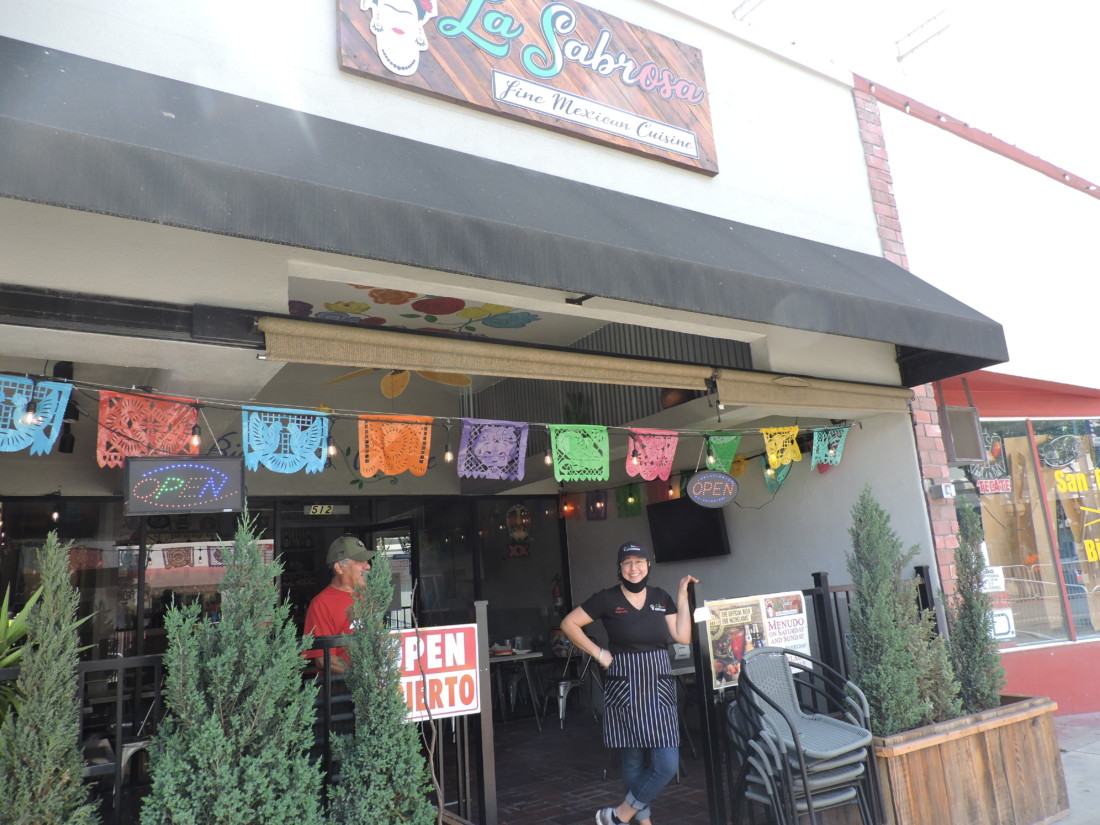 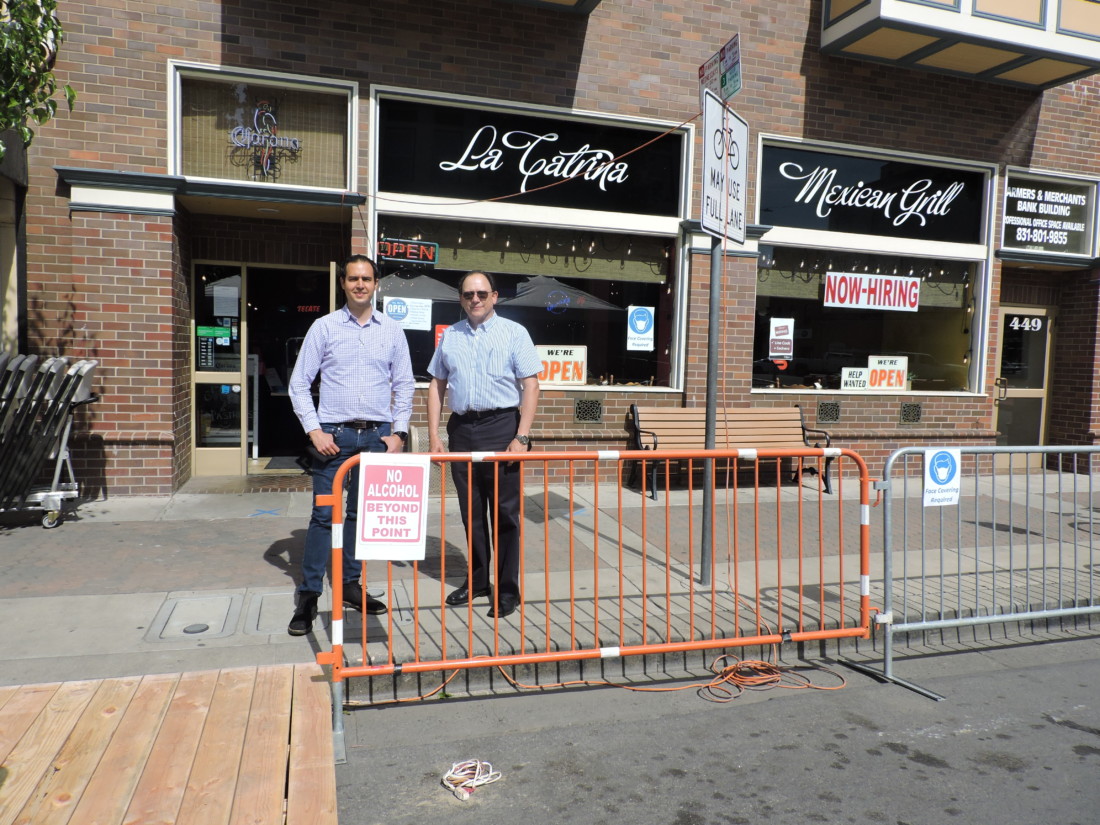 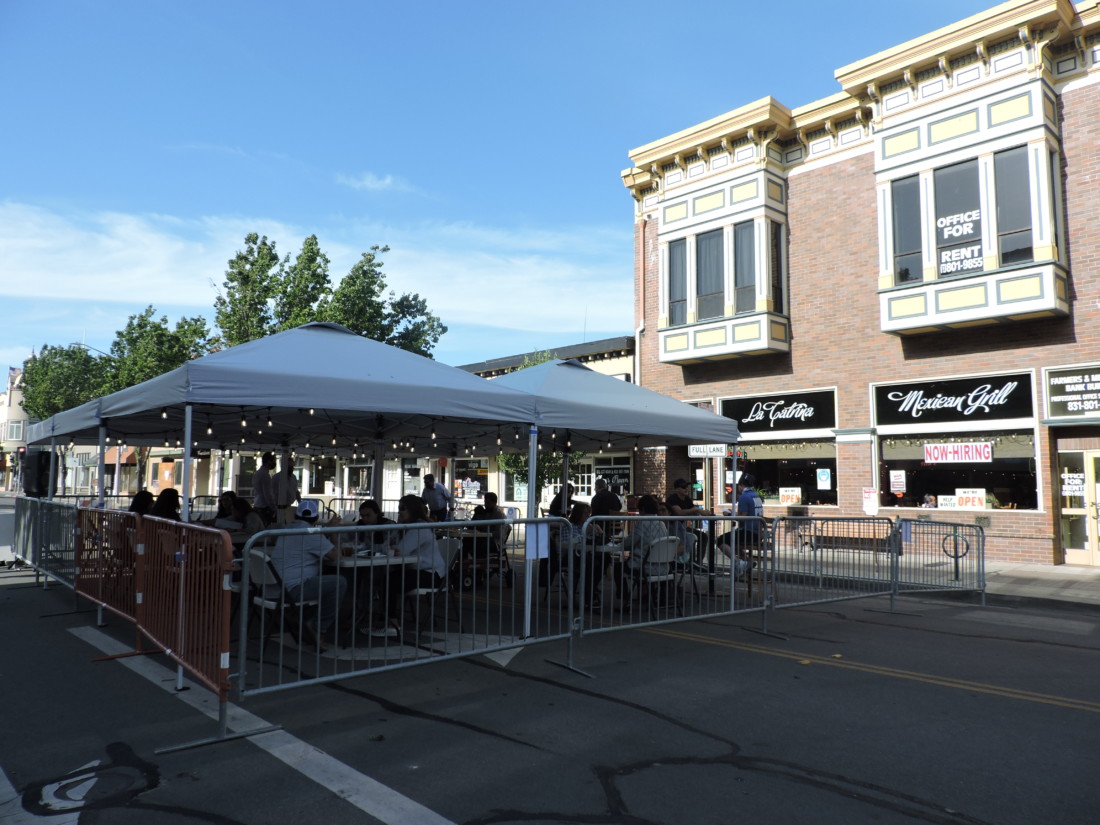 Outside dining full at La Catrina. 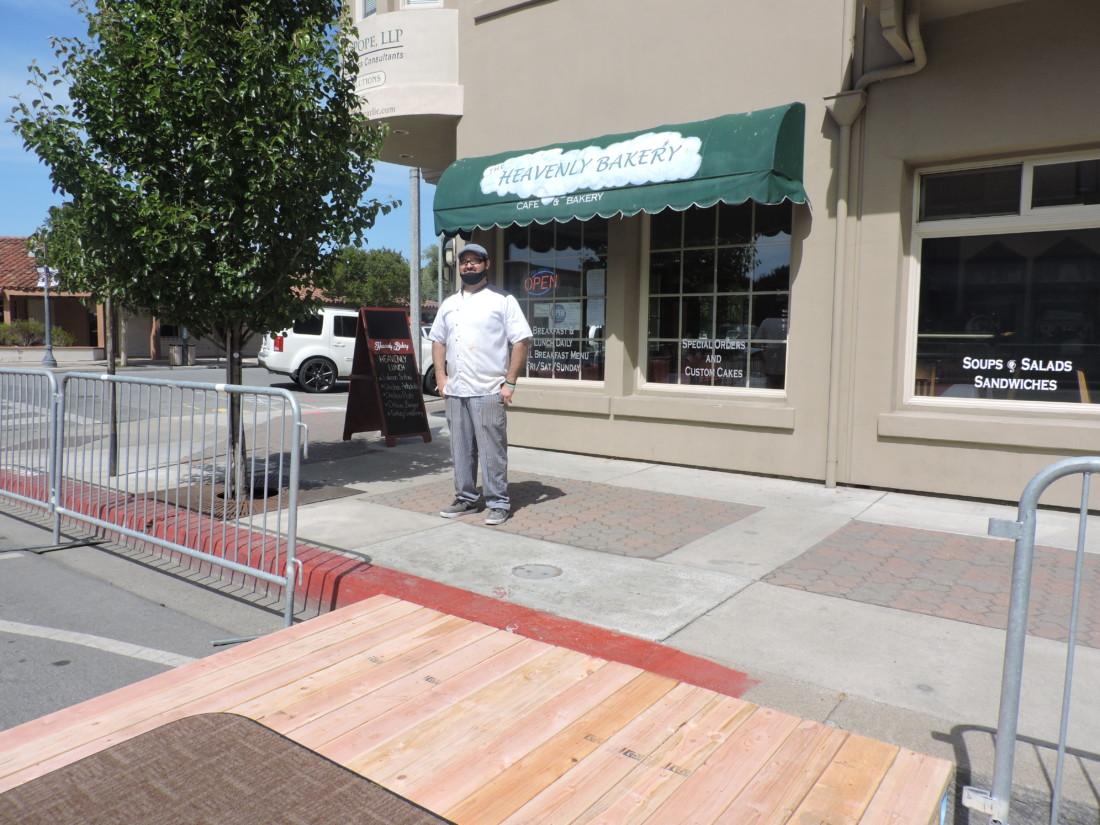 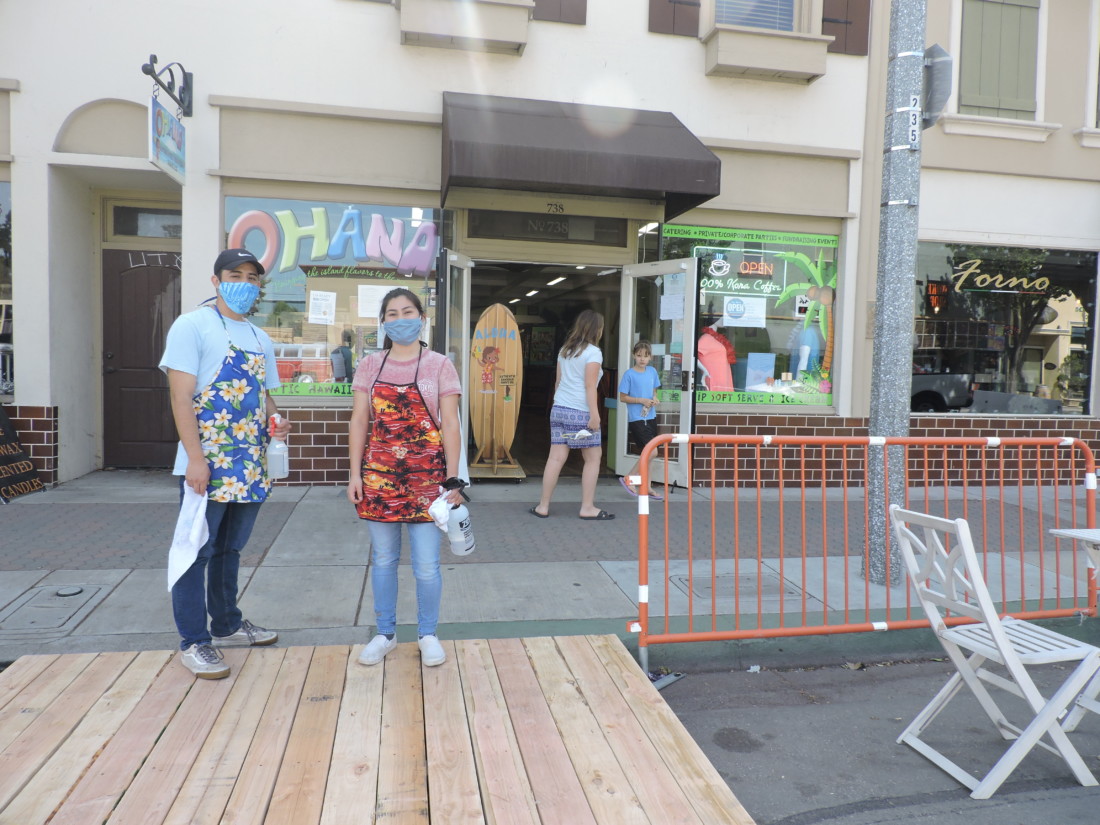 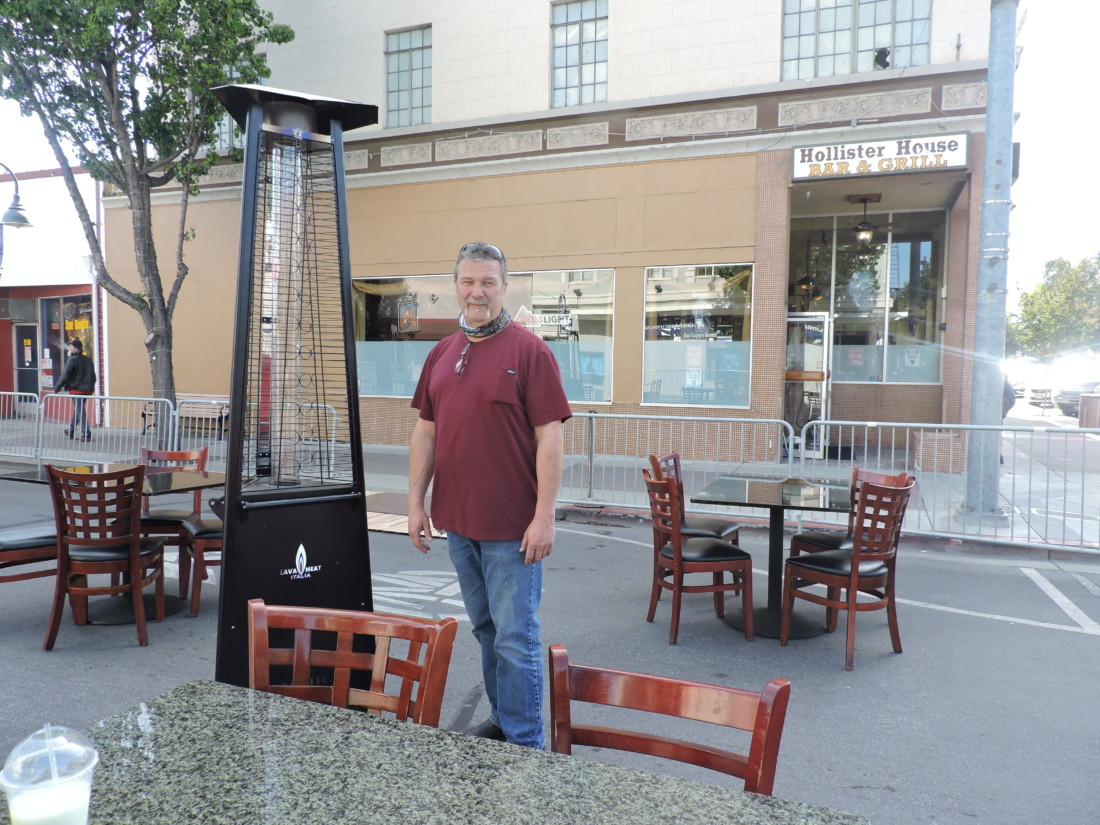 Hollister House owner Jack Barbieri stands inside his outdoor seating area in front of his restaurant. 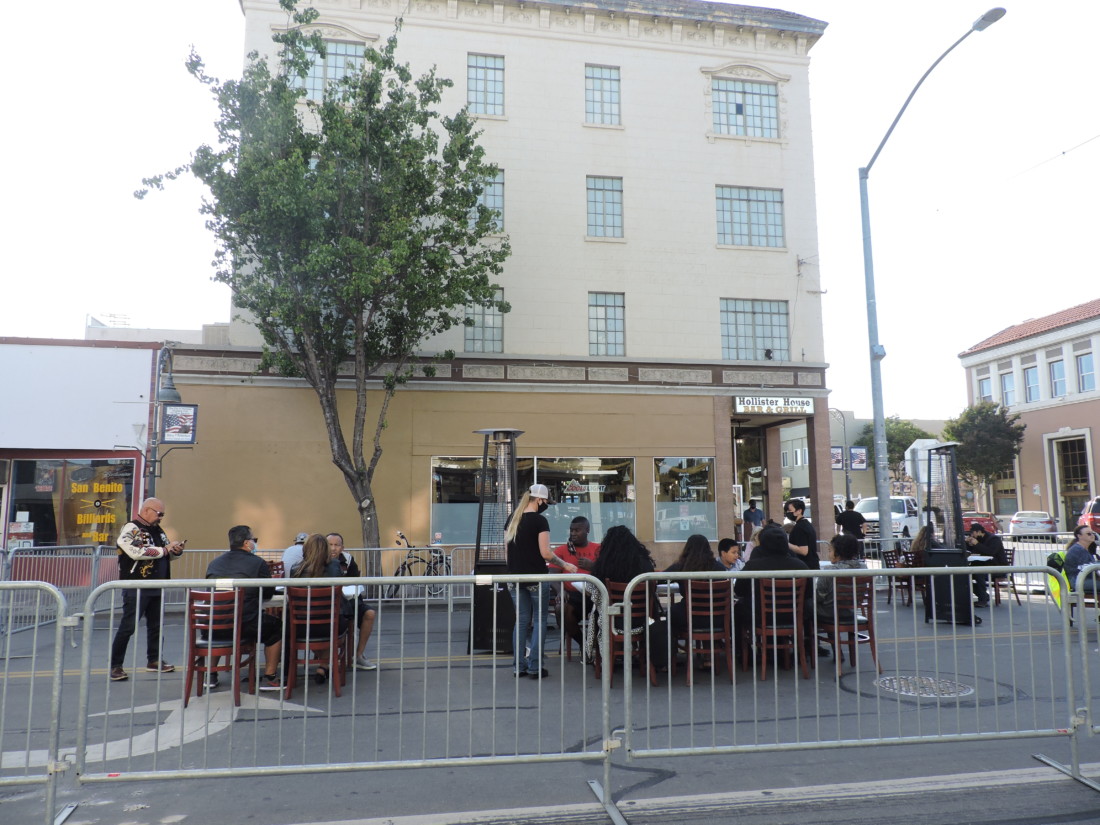 A view of customers engaging in outdoor dining at Hollister House. 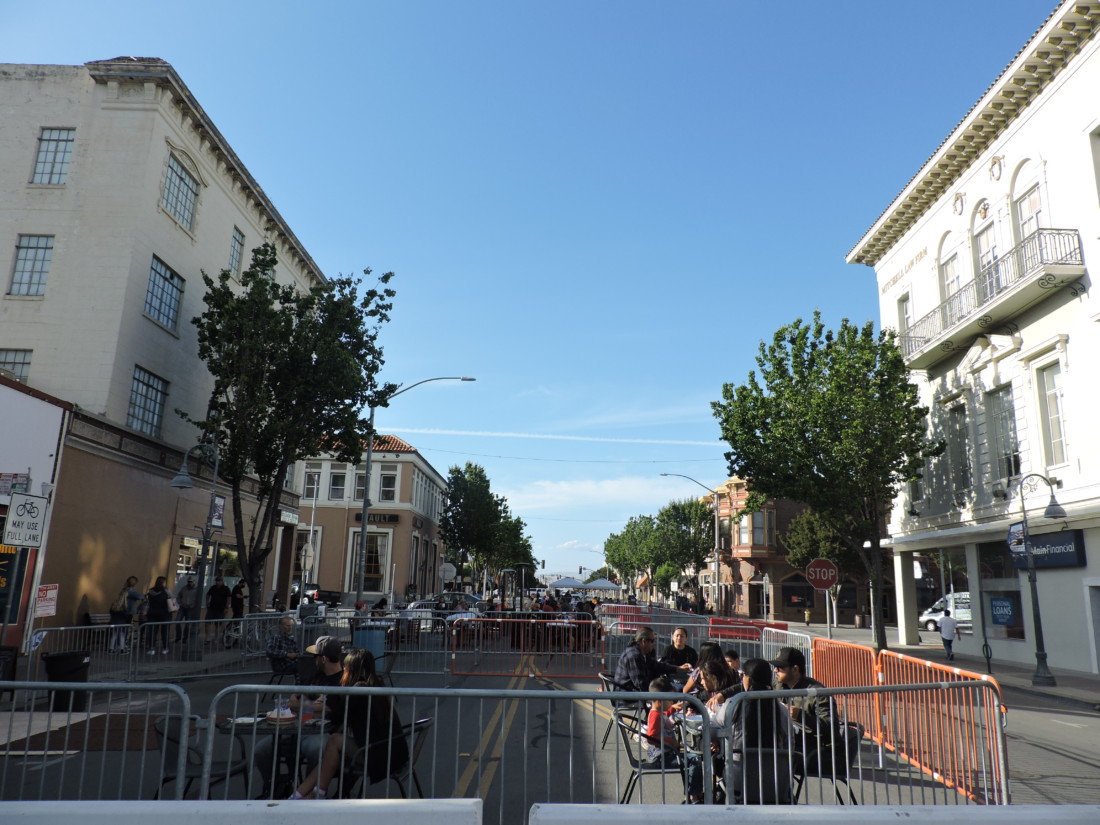 Hollister hosted its first outdoor dining on San Benito Street on May 22, one week after the City Council voted unanimously to close off the main route between Fourth and South Streets. The closure will take place every weekend through August to help downtown restaurants meet social distancing guidelines while reopening.

“Our goal as a city is to make the process as easy as possible for them so they can set up, start making money and hire their people back,” Mayor Ignacio Velazquez said.

San Benito County is one of only 18 counties in California allowed to partially reopen and enter into Stage Two of the state’s four-stage Resilience Roadmap. As of May 22, 69 San Benito residents have tested positive for COVID-19 since February. Nine are currently active, 58 have recovered and two have died.

In regards to managing crowds and sanitation, Velazquez said, “We want to make sure everyone is safe, face covered, sanitizer, all the things that got us to this point.” He added that while the city is working with business owners to remind customers to wear face masks, respect social distancing and keep sanitizing their hands, no one from the city will be enforcing these mandates. It will be up to the business owners to make sure they remain in compliance.

City workers began blocking off San Benito Street around 2 p.m., marking the designated outdoor eating zones with steel fencing and wooden ramps leading from the sidewalk to the street for participating restaurants.

BenitoLink spoke to several restaurant owners to get their take on the outdoor dining setup.

“The sanitizing standards are a lot to absorb as a business and as a person,” she said. “We had to buy more supplies for sanitizing, more gloves and a lot of people don’t want to work right now, so it hasn’t been easy to get staff to work.”

The restaurant first opened its doors last July. It closed for three weeks in March when the shelter-in-place order first took effect, and reopened April 10 for take-out only.

“Around here it seems everybody is complying like in San Diego. As long as you comply more things get lifted,” he said.

Heavenly Bakery, a Hollister staple for the last decade, also made use of outdoor dining space on San Benito Street. Carlos Hernandez, head pastry chef and owner of the bakery, said he received calls from customers expressing interest in outdoor dining.

“We are running a special menu for tonight, it’s not what we normally do,” he said. “We are adding dinner to our menu.”

Overall, Hernandez said he was satisfied with the way the city set up the outdoor dining space, and saw the street closure as a way to help businesses.

“It’s inviting people and sending the message to people that we are still here,” he said.

For some restaurants, such as La Catrina Mexican Grill, the most difficult aspect of the new outdoor dining was that it happened so quickly.

“However, with the support of the people, family, and our staff, it was possible,” said La Catrina owner Gustavo Gonzalez Sr. The restaurant is approaching its six-year anniversary in June. “We have four more people on staff today and that is good because they get their jobs back.”

Gonzalez believes the option to eat outdoors will bring more people to San Benito Street, which he said would be good for their retail business neighbors.

Hollister House owner Jack Barbieri said he just found out this week that the restaurant could participate in the outdoor dining. He called back all his workers and even added a couple more in order to open up. Prior to May 22, the restaurant had been closed for two months.

“The ABC [Alcoholic Beverage Control] loosened its regulations and the business owners who served alcohol had to pay a permit fee of $100 each,” Barbieri said. “We can’t have anyone sit at the bar, so hopefully this will make up for it with the seating we have outside.”

Resident Albert Bracamonte dined at Hollister House, and said “cabin fever” got him to come out for the street closure. He was with three family members, who had already visited La Catrina for appetizers and had plans to stop by each participating restaurant “to enjoy the beautiful day.”

Hollister is not the only place in the county experimenting with street closures and outdoor dining. Over the next month, San Juan Bautista will redesign Third Street as a one-lane thoroughfare so restaurants and retailers can utilize additional outdoor space.

For some restaurants, one week wasn’t enough time to prepare for outdoor dining on San Benito Street. One of those was Miguel Ramirez, owner of TJ’s Tacos and Birria, who said he will wait until he sees how everything goes. To Phó, which opened on March 23 just after the shelter order took effect, also did not participate.

“Right now we are still unsure whether it’s safe, I kind of want to wait it out a bit as well,” owner Toan To said.

However, TJ’s and To Phó are open for regular indoor dining, as well as take out.

Councilman Rolan Resendiz was also out at the street closure, and said the city wants to help businesses succeed.

“We know they just went through a really rough time. Our numbers are looking good, our community and our citizens have done an excellent job and we really want to support people to start opening up their businesses, but in a safe manner,” Resendiz said. “We’re at the forefront of this whole thing, I’m really excited for what’s to come. This is just the beginning.”