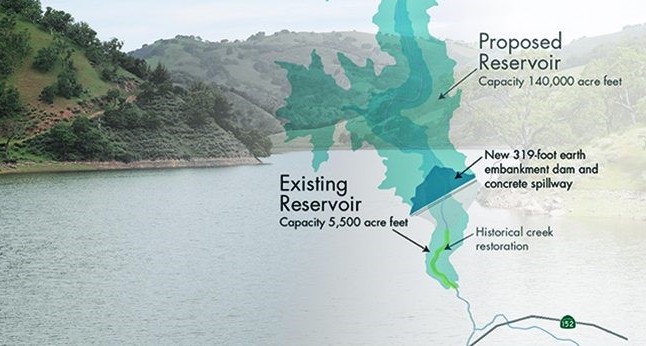 This article was contributed by Water Conservation Program Manager Shawn Novack with the Water Resources Association of San Benito County.

The California Water Commission announced recently that the Pacheco Reservoir Expansion Project will be awarded $484.55 million under Proposition 1, the water bond approved by voters in 2014 to fund new dams and water storage projects in California. This grant represents the full amount that was requested by a partnership of the San Benito County Water District, Santa Clara Valley Water District, and Pacheco Pass Water District.

The grant will fund half of the total estimated cost of $969 million for expansion of the Pacheco Reservoir, a much-needed project that will improve the long-term water supply of the northern San Benito County region. Federal grant funding will also be applied for, and the remaining costs will be covered through local water sales over several decades.

The Pacheco Reservoir Expansion Project is a modern solution to the age-old challenge of providing a sustainable water supply for our expanding population, agricultural uses, and businesses. This project consists of building a 319-foot dam in order to expand the water storage capacity to approximately 140,000 acre-feet; as compared to the 6,000 acre-feet which the reservoir currently holds. Construction could begin within six years. This enormous additional water storage capacity will greatly mitigate the frequency and severity of water shortages, provide flood protection for disadvantaged communities, and protect and grow the native steelhead population.

“We’re very happy the proposal to expand Pacheco Reservoir was rated so highly by the commission," said Joe Tonascia, president of the San Benito County Water District Board of Directors. "The commission recognizes that the communities of San Benito County and Santa Clara County along with the entire state will benefit greatly from expanded water storage capacity. This is a major step in providing water supply reliability now and into the future.”

Among the expected benefits of the Pacheco Reservoir Expansion Project are the following:

The San Benito County Water District works to preserve the economic and environmental health and well-being of San Benito County through the control, management, and conservation of waters, and the provision of water services in a practical, cost-effective, and responsible manner. The District is the Groundwater Sustainability Agency (GSA) for the County. It owns two surface water treatment plants in the Hollister Urban Area that deliver drinking water to Sunnyslope County Water District and the City of Hollister. The District also manages local and imported surface water through the San Benito River System and the San Felipe Distribution System. The San Felipe System delivers imported Central Valley Project (CVP) water to irrigation, municipal, and industrial customers. The drinking water that the District delivers to Sunnyslope County Water District and the City of Hollister ultimately becomes recycled water from the City of Hollister’s Reclamation Plant. This reclaimed water is then used for irrigation water by local farmers.