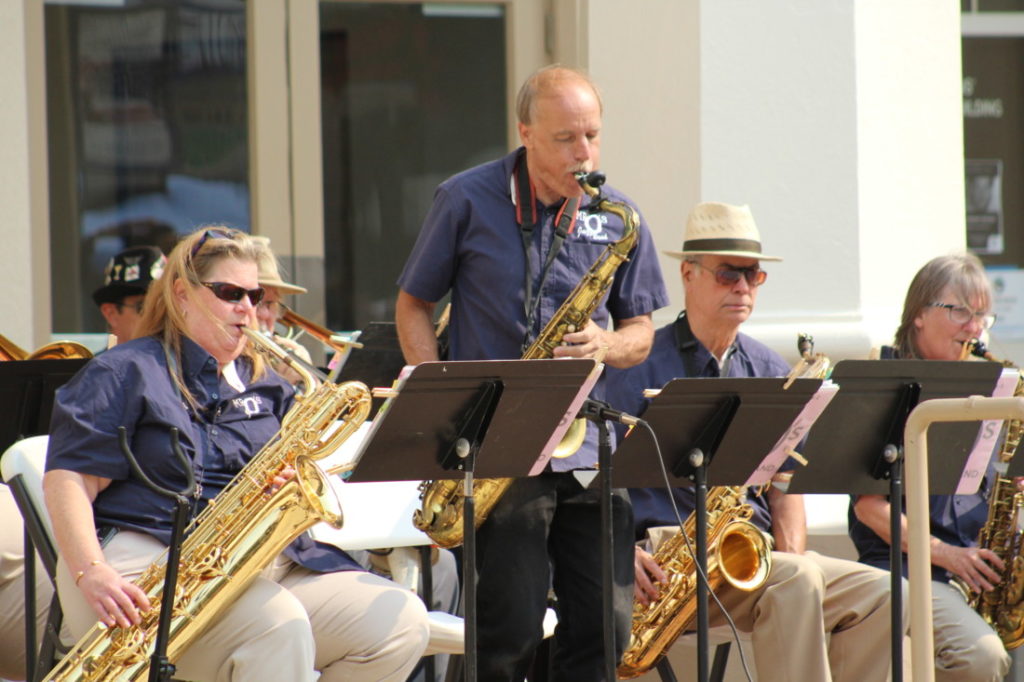 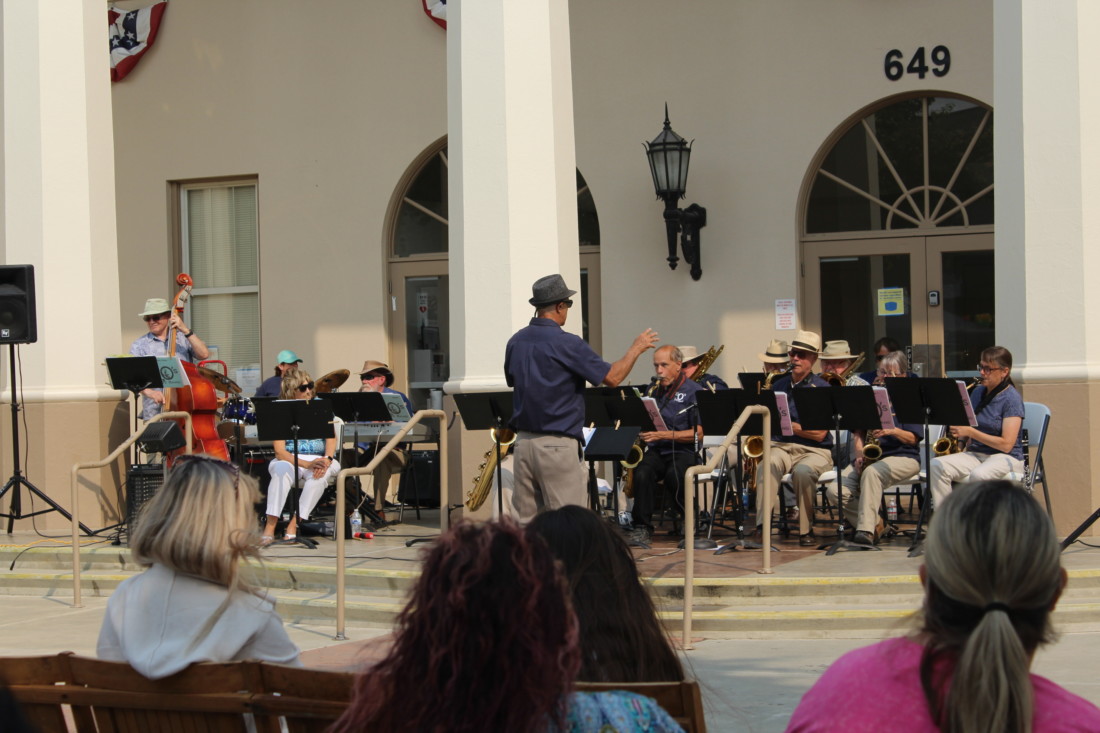 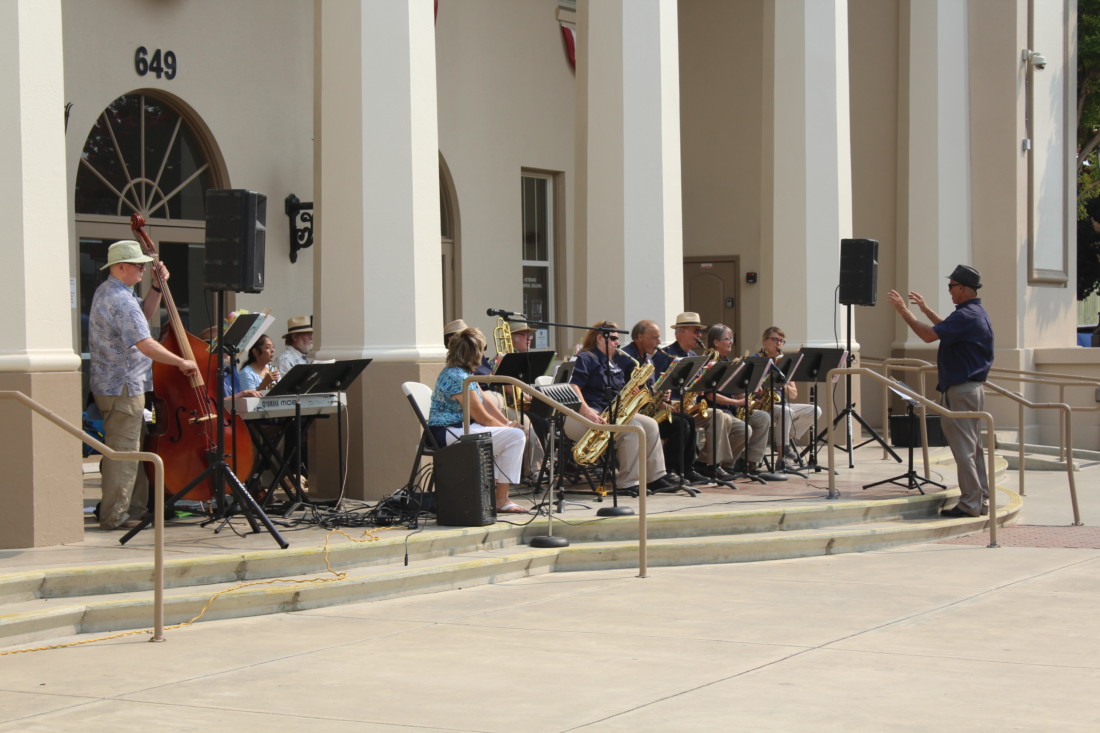 The Pacific Pop ‘n’ Jazz Band made its debut performance at the Hollister’s 34th Annual Street Festival and Car Show on Sept. 25.

Formerly known as Mr. O’s Jazz Band, the band performed on the front steps of the Hollister Veterans Memorial Building on San Benito Street at 2 p.m. They performed a 10-song playlist including “Cerezo Rosa,” “Sentimental Journey,” “Jump, Jive and Wail,” and “Pennies from Heaven” to about 30 listeners, as well as passersby of the festival.

“We’re all really excited about playing again,” said Wendy Rothwell, who has played alto saxophone with the band since 2016.

Mr. O’s Jazz Band stopped performing in March 2020 with the onset of the pandemic. After director Joe Ostenson (Mr. O) passed away in January, the band met on Zoom to practice and create virtual performances. The original group of 10 people, however, had been cut in half.

With new director Steve Sladon, who played with Mr. O’s Jazz Band from its beginning, the band began rehearsing on June 22 with only four people.

“We didn’t know if it was going to work out,” Rothwell said, adding that many members who didn’t return were youth members.

Now there are 17 musicians in the band, with a full saxophone section, two trombones, five trumpets, drums, bass, piano, and vocals. Nearly half of them, recruited by original band members, come from Watsonville, Monterey, Salinas, Aptos, and Los Banos to play with the Hollister band.

“We have a lot of things we can do, so I think that’s something we’re excited about doing,” Rothwell said, referring to the band’s larger size and experienced musicians. Though the band has grown, it is still seeking two trombone players and a jazz guitarist.

Rothwell, who creates a playlist for the band every week, takes care of the music the band rehearses. “Francie [Ostenson] gave me the music after Joe died, so I felt responsible for them,” she said. “I’m kind of the manager of the band.”

As unofficial manager, Rothwell was also tasked with finding a rehearsal spot for the band, since Mr. O’s Music Academy had closed in late 2020. The band was fortunate to have the Hollister United Methodist Church open their social hall for rehearsals once a week.

“In order to be able to play at the church, however, we needed to get a waiver signed by everybody,” Rothwell said. “We also needed to insure the band.”

Rothwell explained that the band needed to have a name in order to be insured.

“We didn’t really feel right calling it ‘Mr. O’s,’ so when things were getting closer to getting the venue, we talked about different names,” she said.

Still wearing their former Mr. O’s Jazz Band shirts at Saturday’s performance as a tribute to Mr. O, new shirts with the new name are being made.

The Pacific Pop ‘n’ Jazz Band rehearses Tuesday nights from 7:30 p.m. to 9:30 p.m. at the Hollister United Methodist Church. Performances at venues such as My Father’s House Homeless Ministry and Swank Farms are already being booked.

“We’ll still have memories of Joe,” Sladon added. “We’ll mention him during rehearsals and during the performances. We have reformed under a new name, but we will never forget how Joe got the band going and we have about nine years of experience thanks to Joe.”