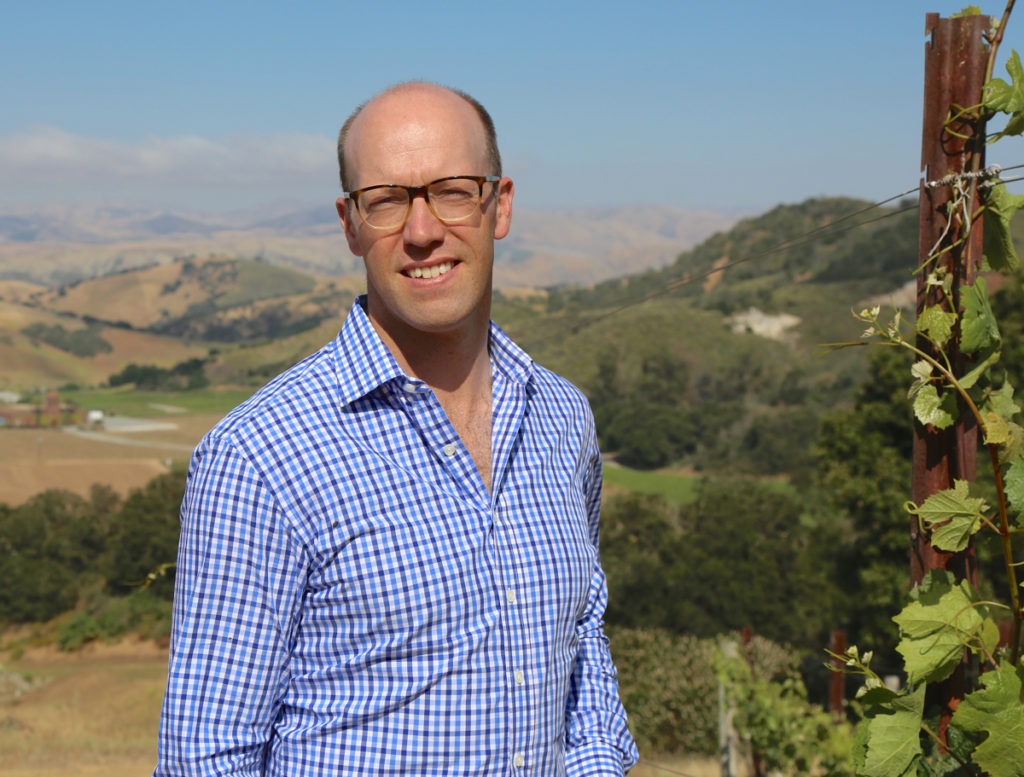 Climbing into a Jeep and driving along the rows of vines, Christian Pillsbury explained that he sees great promise in this protected little valley and is excited by the challenge ahead. Pillsbury is the new owner of Eden Rift Vineyards, the popular wine-tasting destination previously known as Pietra Santa Winery. Pillsbury was raised in San Francisco, held several international jobs and is now a full-fledged San Benito County resident.

The 40-year-old purchased the historic vineyard and winery this spring and the ownership transition is nearly complete. BenitoLink was granted an exclusive interview with Pillsbury to tour the private estate just off Cienega Road along San Benito's wine trail. “I totally fell in love with wine in my 20s,” Pillsbury said, shifting into low gear and heading up a steep slope. He started out by getting to know the less romantic side of the business, “throwing boxes at Bev Mo,” as he put it. Since that ground-level start, he has traveled extensively, often doing work that kept him closely connected to his passion.

According to his extensive resumé, Pillsbury became head of Duty Free Shop’s global wine business, and he founded Applied Wine, a venture-funded startup based in Hong Kong. Pillsbury most recently became involved in a product called “Coravin,” a tool that allows wine to be extracted from a bottle without having to pop the cork. Pillsbury held a senior position for Coravin and helped introduce the revolutionary wine device across 11 countries in the Asia Pacific.

This summer, the vineyard moves into a new phase of its long career, with Pillsbury at the helm. He will be continuing the estate‘s pivot toward French varieties, as opposed to the Italian varieties planted by Joe and Deanna Gimelli, under the Pietra Santa name 20 years ago. The Blackburn family purchased the vineyard from the Gimellis and operated it for more than 10 years. The Pietra Santa tasting room remains open this summer, offering up remaining bottles of the locally popular wine. The Gimelli and Blackburn families developed the winery as a popular wine-tasting destination and a successful location for community events. Both were actively involved in supporting area nonprofits.

Pillsbury is a history buff and views his challenge partially as an opportunity to restore the 168-year-old vineyard’s legacy. Grape vines were planted on the site in 1849, establishing it as one of the oldest continually producing vineyards in California. Originally, the neighboring De Rose Winery was part of the same vineyard.

An online digest article called “A View of California Wines and Wineries” tracks the path of this once nationally recognized vineyard:

“The "Vineyard District" was first planted to vines by Theophile Vache, surname Vaca, a Frenchman who cleared the chaparral brush and trees in 1849 or earlier and started what were to become famous vineyards. William Palmtag, a German immigrant who became mayor of Hollister, where he also owned a bank, acquired the property in 1883 and greatly extended the vineyards, importing choice European varieties. He established a winery and his Palmtag Mountain Vineyard wines won many prizes at national and international wine competitions.”

Pillsbury’s primary residence is the century-old Dickenson House. With a kitchen island covered with French and California wines, he demonstrated the Coravin wine device. The Teflon needle can take a portion of wine out of a bottle, without affecting the quality of the remaining wine in the bottle. Whether it is table wine or a $500 connoisseur wine, the remains can be saved for another day. When asked about Eden Rift, Pillsbury’s new name for the vineyard, he said, “I recognize some people are upset about the name change and the shift in direction. Our goal is to take it to its rightful place as a legacy vineyard. It is really a special property that is unique, perfectly suited for French wines, as originally planted at the turn of the 20th Century,” he explained. In just a few months, he has already started to build his dream, grafting and planting a number of acres over to California heritage clones of Pinot Noir and Chardonnay. “Around 1988, the Gimellis rediscovered it and made it something special,” Pillsbury said. “ My interest is to take its history, climate and soil and produce the wines that were produced here for the first 100 years of the estate’s history,” he said. Pillsbury argues that the climate is not ideally suited for Cabernet or Merlot, necessitating the dramatic investment in the vineyards.

To the relief of local olive growers, Pillsbury said he expects that the vineyard’s Italian Pieralisi olive press will continue to be accessible to the community and surrounding areas.

Local winemaker, Cory Waller, was hired at the vineyard in the beginning of 2016 and Pillsbury intends to keep him on. “He is part of the reason we made the choice to get involved in this property. He increases confidence because of the quality of work he has done,” Pillsbury said of Waller. Cory Waller’s brother, Mike, works just down the road at Calera. Looking out over Eden Rift, Pillsbury explained, “What protected this valley is that it was never very useful for something else. It’s not good for crops, not great for cattle.”

Pillsbury pointed out that there are 7.5 million people within 70 miles of this quiet spot. “All these places in Santa Clara County and Monterey County….. so much has been torn out, the fruit trees, walnuts, and vines, for other uses. Eden Rift is a little valley that has been left alone and kept a vineyard for over 150 years. It really is an ‘Eden’,” he said, “and the underpinnings are perfect.” Timeline from “A View of California Wines and Wineries”

A last “Pietra Santa” event is scheduled for July 15 at the winery. There will be a summer celebration with music from Mary Ellen Duo and a wine sale from 11 a.m. to 4 p.m.. For information, call 831-636-1991. (7/2 Correction made in spelling of performer, Mary Ellen Duo. Thank you for informing us of the error).