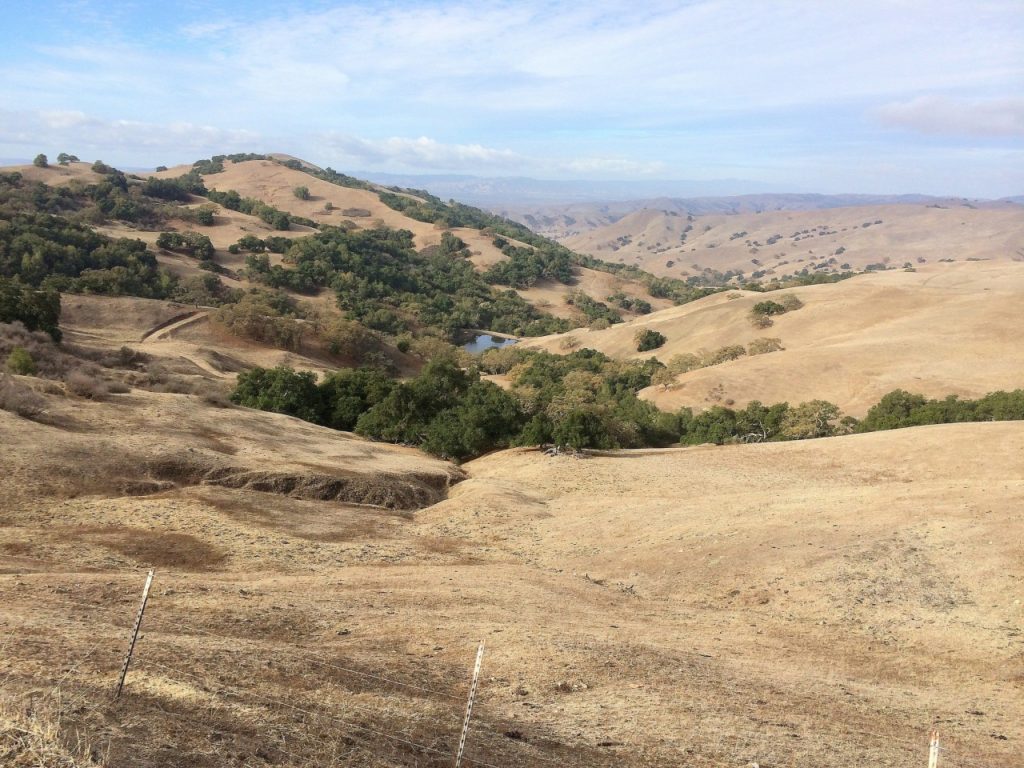 A mid-winter view of Sparling Ranch. Photo by Steve Rottenborn. Two-thousand acres of a historic ranch straddling the San Benito and Santa Clara County line has become a wildlife conservation bank. After an eight-year effort, the project will protect sensitive habitat while the century-old family-owned Sparling cattle ranch continues to operate.

The ranch was originally homesteaded, but was absorbed by settler T.S. Hawkins as he and his wife expanded their ranch boundaries. Over 6,000 acres total, it has been held by Hawkins’ descendants, but about a decade ago they found it increasingly challenging to keep it.

Linda Morrissey, the most senior member of the Hawkins/Sparling family, said in an interview with BenitoLink, “In the ranching community, the older members have control and the new generations come in. Now it’s three separate families.” Each family has children, grandchildren, even great grandchildren, all with their own interests.

One-third owner Morrissey, who still lives in the home her parents Brick and Jean Hawkins Sparling built in 1952, said in recent years the ranch has struggled financially and that competing individual goals have been increasingly problematic. “It’s more a way of life. The ranch isn’t big enough to hold everybody and they all have to work other places.”

Morrissey’s cousin Tom Sparling, also a one-third owner, has a roofing and solar business in Santa Clara County. He spent his childhood exploring the ranch, hunting, fishing, and enjoying its abundant wildlife.

“We have had a cow-calf operation for three generations and half [the family] wanted to sell and half didn’t,” he said.

Accepting that a sale was likely, Morrissey, Tom Sparling, and his cousin Ed Sparling began showing it to potential buyers.

Around the same time, Michael Anderson, a property developer, started a planned development, Santana Ranch, on Hollister land his family had invested in 20 years earlier.

In order to get approval, he and his partners, the Guerra family, were required to find other land to mitigate for potential impacts to rare species. To move forward on the 1,092-home project, Anderson needed to find 700 acres of mitigation land. The two families formed a company called South Bay Conservation Resources and committed to the long process ahead.

Federally, the red-legged frog and the tiger salamander are threatened species and controlled under the Endangered Species Act. On the state level, only the tiger salamander is considered threatened. South Bay Conservation needed to find a suitable piece of land with both amphibians, and they zeroed in on the 2,000-acre piece of the Sparling Ranch.

Thus began a detailed and tedious process to confirm the existence of the salamander and frog and study their surrounding habitat, from plants and insects to the still-abundant resident wildlife.

“We are not looking for a particular number of animals or amphibians but a habitat that we can provide them in perpetuity,” said Jeff Phillips, the U.S. Fish and Wildlife Service conservation banking coordinator and senior fish and wildlife biologist.

Phillips explained the value in working on larger pieces of land: “A lot of the excitement is that it is a whole ecosystem that is preserved. A lot of these large ranches that have species doing well are because the landowner has been a great steward of their land. What they’ve been doing is totally compatible with a healthy ecosystem.” Phillips, who has handled several wildlife conservation banks, says grazing cattle can have a positive impact on red-legged frog and the tiger salamander habitat.

“It’s a pristine ranch that hasn’t been used for anything but grazing cattle and that’s why it has all those animals they want,” said Morrissey, who spent years working in the livestock operation.

Developer Anderson got to work with the agencies. “We created a habitat enhancement plan and management plan,” he said. “Then, we created an endowment [about $1 million] so that there are funds available in perpetuity for tasks such as biological surveys, bullfrog control, and genetic testing of salamanders.”

Astutely, they realized other developers could take advantage of all their groundwork and Conservation Resources could sell the remaining bank acreage to them.

Using earned interest from South Bay Conservation Resources’ endowment, Anderson will have independent biologists check the welfare of the species once a year in perpetuity.

“We’re in the forever business,” said Phillips about U.S. Fish and Wildlife’s outlook.

Phillips continued: “The endowment is there to provide the long-term management plan for the species: animal control related to the species being managed, optimal grazing intensity, invasive species, habitat maintenance, and improvement.”

Those plans now include fencing across some of the ranch’s stock pond dams and excluding cattle from specific areas. Referring to these new management methods, Tom Sparling said that from his perspective, “Some make sense and some don’t.”

The Sparling Ranch project got state approval in January 2017, and finally in early 2018, Anderson attained federal approval after an eight-year process.

“We were a little naive about the process—the Sparlings joked about getting it all done in 90 Days, but it has been great to work with them,” Anderson said.

According to Sparling, the conservation bank sale provided family members nearly the same amount of money—“thousands an acre”—they would have gotten by selling off the 2,000 acres as originally planned.

Some changes had to be accepted, like the sale of the ranch’s 400 cows, which were replaced with cattle owned by customers paying a pasture bill.

“I cried like a baby when we sold the cows,” Morrissey said.

The Sparling Ranch will continue to operate, but from here on, they will be working with several new partners; cattle pasture customers, federal and state government agencies, and South Bay Conservation Resources.

Still, all concede that a land sale would potentially have broken up the intact wildlife habitat with new homes, roads and fencing, while reducing the viability of the livestock business itself.

“I’m thrilled,” 79-year-old Morrissey said about the end result. “This will be preserved forever and I think that’s kinda cool.” Her great-grand nephew now runs cattle on the ranch and, she adds, “My great-grandchildren will be able to enjoy this property.”

“We can still do what we always have done here: hunt, fish, ride quads,” said Tom Sparling. “There’s never gonna be houses up there,” he said.

With South Bay Conservation Resources’ remaining 1,400 acres, the land is available for other projects and it “could just take a day” for other developers needing to mitigate, Anderson said. With approval, the Sparling Ranch land can accept development projects from the northern Bay Area, extending as far south as San Luis Obispo County.

“The developer is getting permits more easily, so the species are coming out a lot better now,” Phillips said. “Before, we were doing it in smaller segments, just saving bits of habitat.”

Anderson said the whole process was “eye-opening” and that he has enjoyed the time he has spent with the Sparlings along the way. He and his partners are now offering a mitigation opportunity to other developers and public agencies which could save them the time and staff needed for creating one themselves.

Anderson was not able to estimate the financial impact the mitigation requirement put on each house cost in Santana Ranch, but he said he and several of his qualified staff members worked on it every week for the eight years.

To learn more, see the Federal Fish and Wildlife Service article written and published prior to final approval on the same topic. https://www.fws.gov/cno/newsroom/featured/2017/sparling_ranch_cb/