Nearly 200 people showed up at Hollister City Council Chambers to listen to candidates and hear about Measures A, B and C 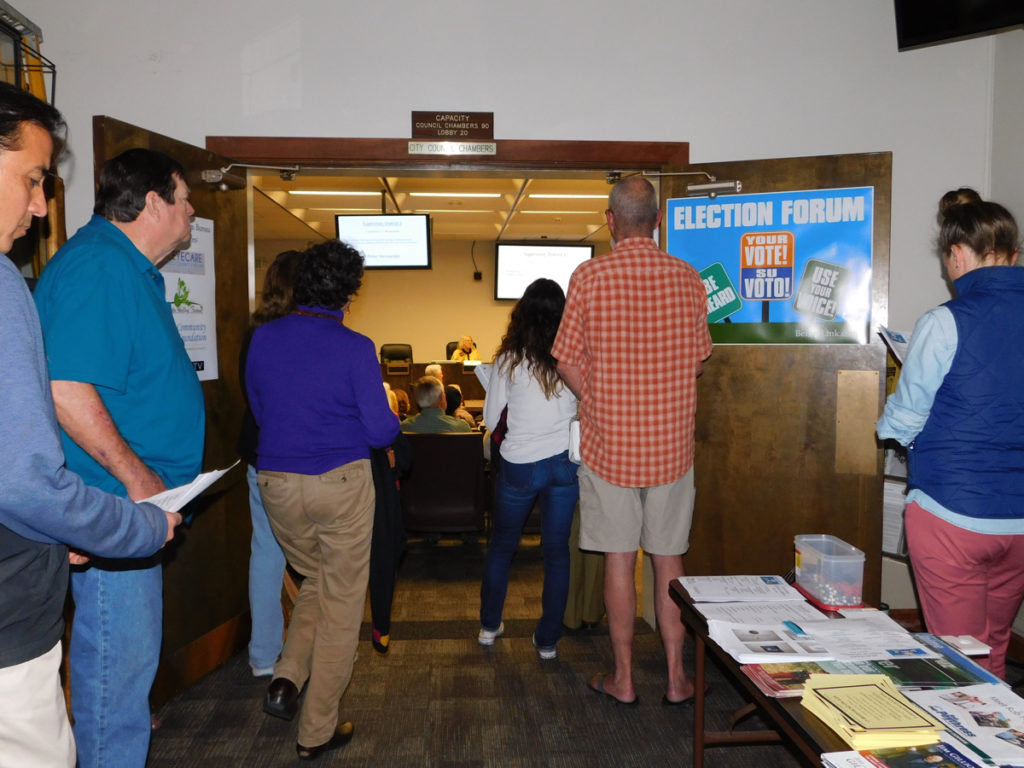 Attendance at the event was excellent and many community members stayed late into the evening listening to candidates. (Photo by Blaire Strohn) The community came out en mass Thursday night to attend the BenitoLink-Farm Bureau Election Forum at Hollister City Council Chambers. BenitoLink reporter, John Chadwell, who covered the event, estimated there were about 200 people trying to get in the chambers to watch the forum. Briefly, the back walls of the meeting room were lined with listeners, the lobby was jammed with candidates and their families and about 30 people were waiting on the front steps to get in.

BenitoLink will be publishing a thorough written report over this weekend with the highlights of the evening.

The entire forum was published live on Facebook the evening of May 3, and at the time of this news report, showed nearly 1,200 viewers.  “Great turnout, good ideas!” wrote Mary Schneider on Facebook about the forum.

During the forum, Judge of Superior Court, No. 2 candidate Robert Michael Foley, a retired Superior Court judge for Santa Clara County announced he was removing himself from the race.

Over the last month, the public was invited to send questions to both BenitoLink and San Benito County Farm Bureau via email, notes, phone calls and Facebook comments. The joint committee took those suggestions into account among others and then selected the final questions for the event.

For a few moments, City Hall employees threatened to shut down the entire event due to an unexpectedly large crowd. The room capacity is 90 and there were concerns about fire safety. Fortunately, most of the over 25 candidates attending agreed to wait their turn in an adjacent meeting room, relieving some pressure on the room. Those late to arrive waited outside for guests and candidates to leave.

Short video clips are being edited by media partner CMAP-TV and will be published on BenitoLink in brief, watchable segments for each race and the measures early in the week of May 7. The video segments, expanded BenitoLink reporting and promotional materials were made possible by event sponsors: the Community Foundation for San Benito County, SBC Eyecare and Benito Valley Farm.

An informal survey was handed out to those attending. Only about 20% of people at the forum returned their surveys. The following is a compilation of the (relatively few) survey results.

Which Candidate (s) Impressed You The Most?

What Measure (s) Do You Support?