He talks about the recent increase in cases and why the 18-49 age group is seeing the most infections. 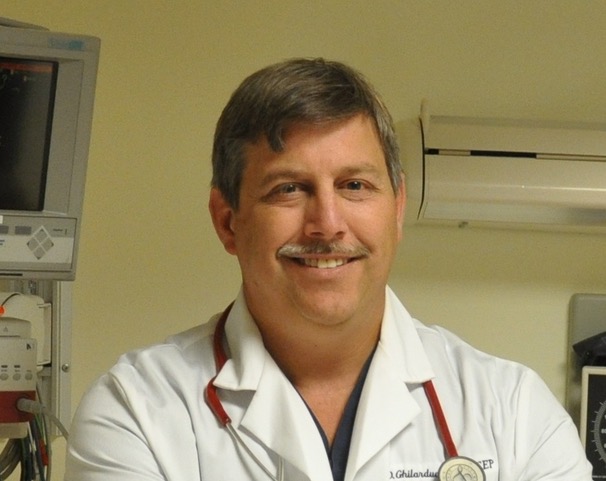 Since stepping into the role, the county set up a federally funded test site at the Veterans Memorial Building in Hollister. As of May 28, OptumServe has conducted 2,649 tests.

According to the county’s COVID-19 Dashboard, 87 people have tested positive for the coronavirus since February. Fourteen of these are active, 71 have recovered, and two have died.

Ghilarducci spoke to BenitoLink about the recent increase in infections, businesses that are out of compliance with health orders, the status of the county’s variance attestation, and what age groups are seeing the most infections.

BENITOLINK: Health and Human Services Director Tracey Belton said she believes the recent increase in COVID-19 patients is due to people gathering and not necessarily a reflection of increased testing capacity. How much did gatherings during the Mother’s Day and Memorial Day weekends affect current data?

GHILARDUCCI: Well we’re looking at seven new cases two days ago, and 18 new cases over the past two weeks. There isn’t a real clear pattern. It’s really a mixed bag. We know that the number of positive cases coming out of our Optum test site, which is the community access site, is very low so we are not seeing at least that aspect of testing adding to the numbers. Seven new cases that I referred to just recently had to do with a single family. So when we are talking about relatively low numbers, just one or two isolated cases like this could lead to a big jump in the numbers. I think it’s important to keep that in context.

In cases where businesses could be out of compliance with state orders or guidelines, what power does the health department have to make sure they comply? What is the process for following up with businesses that continue to ignore health orders even after a warning from the county?

That is an area that I’m not an expert in terms of the enforcement aspect, and I would refer you to law enforcement. But some of the tools we have available to us certainly are the business license or the Alcohol and Beverage Control agency through the state—these are other ways to maybe mitigate that situation. We are essentially relying on people acting responsibly, including businesses.

As I said, seven new cases were related to one household. Can you imagine a bar full of people all from different households, and how quickly that could expand and spread out? It could take just one business to really blow this up. And what that would mean we would have to go back to Stage One, which means that only essential businesses would be open. Everybody would have to shut down based on the actions of one bar. There are penalties associated with this. There are ways to retract business licenses or their ability to serve alcohol.

Supervisor Anthony Botelho said at a May meeting that the county was one positive test away from being unable to submit its variance attestation to move to Stage Two of the state’s Resilience Roadmap. Are there requirements for the county in order to remain on the list? Can the state remove the county from the list if it does not continue to meet the criteria?

That process is being discussed, and there is one county in California that did retract their variance and went back to being a kind of a non-variance county. That was Lassen County and that was because the disease spread beyond their original criteria for the variance and they felt that they had to walk it back in order to control the spread. So as far as we’re concerned, we’re watching it.

We recognize that some of the criteria in the original variance application could fluctuate. So there could be a day where we don’t meet the criteria and the next day we do. We sort of expected that to happen, but if we see a clear trend of the number of cases rising and other issues like that, then we may have to walk it back. My guess about how that would happen is, we would start to close the last businesses to open and do everything in reverse, if that makes sense.

As for the state, they told us that they would be monitoring our numbers as well, and if they see a trend or issue we’re going to have consultations with each other. But they are largely relying on the local public health departments and health officers to decide what’s best for their community.

Was it Lassen County or the state that retracted the variance?

I believe it was the county. The state has decided not to put themselves in the position of saying yes or no from that perspective. I would imagine if there was a situation that the local health department wasn’t responding to and the state was sufficiently concerned, they may strongly encourage them to walk back their variance. To this point, I believe it wasn’t the state telling them to do so. It was more their internal decision to do so.

Which industries have seen the most COVID-19 infections?

We’re not seeing anything that looks like we can point to one or two areas at this point. Essentially, it’s a mixed bag in terms of causes. There is person-to-person transmission—that’s between two people in the same household—and there is community transmission, which is they picked it up somewhere in the community. Sometimes it’s not clear where it came from, but we’re not aware of any clusters or outbreaks related to any particular industry or any particular restaurant or bar. Evidence of such an outbreak would probably not show up for two to three weeks. Whatever we are seeing today in the numbers, it’s what happened two or three weeks ago.

The age breakdown of patients shows the majority of the county residents testing positive for COVID-19 are within the 18-49 age group. Can you break that down even more?

I had asked for that, I don’t think we had it. We actually redid the age group list and in the 0-17 [age group] we only had two cases. Fifty-seven cases in the 18-49-year-old group, that’s about 67%. I don’t have it broken down any further than that.

What are some of the reasons this age group has the most infections?

A number of reasons. This group is more likely to come in contact with others due to work, school and social activities. Additionally, for the 18-49 group, the younger subset may not feel they are at personal risk and may be less likely to adhere to precautions.

Finally, according to the U.S. Census, about 60% of San Benito County’s population is in this age group.

Is there anything that you’d like to add that is important for the public to know?

There’s been some controversy about the mandatory face covering orders that we have. I just want to remind people that when you wear a face cover, it’s not really about whether you choose to be risky or not, whether you are making a decision based on how you feel your risk of exposure is. When you wear a face mask, it’s more about showing care and respect to your neighbor or for the person next to you because the face covering is about reducing the spread from you to someone else.

The reason it’s so important right now, more so than ever, is that we are rapidly re-opening our economy and many more businesses are open including churches, hair salons, and dine-in restaurants. This has the potential to explode, so it’s one of the few tools we have left.

Remember, we don’t really have a medicine for this, we don’t have a vaccine for this. Thirty percent of the people with this disease are walking around without any symptoms whatsoever. Sometimes they don’t develop any symptoms ever. It’s not that they are presymptomatic, it’s that they are asymptomatic. And when you have a situation like that, then you have the chance for this to explode. The last thing we want to happen is for our hospitals to fill up, or when people who need emergency care can’t get into the hospital because there is no room. Once that happens, that’s when the death rate skyrockets.

So we’re very concerned about that and we do ask the people to continue to comply with the face covering order. We know it’s not comfortable, especially in hot weather, but it’s really about showing respect for your neighbors.

284 people have tested positive since February, 38 are active patients, 244 have recovered and two have died.