Lights On Celebration and downtown parade goes on as planned, kick-starting the holidays 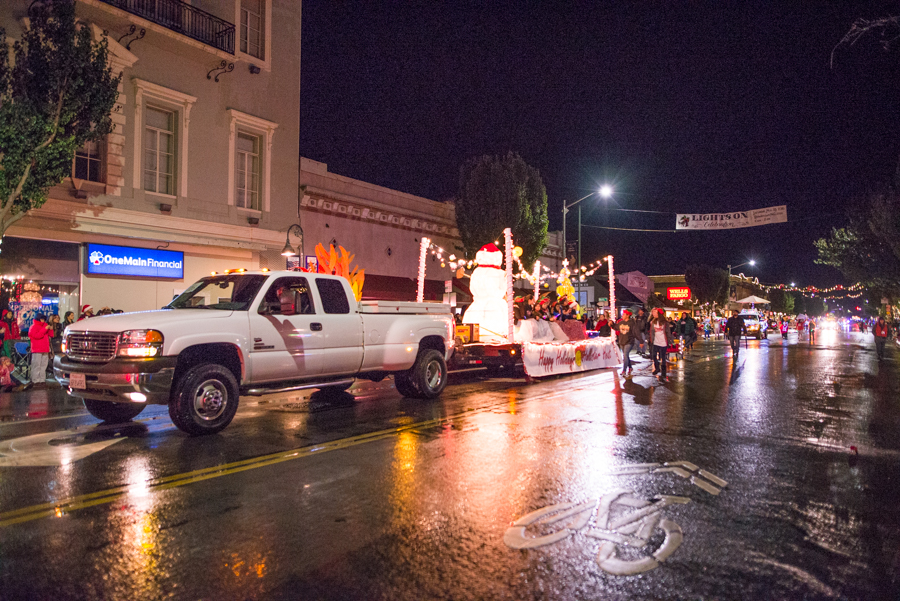 “A Night Before Christmas” was the theme for the 26th annual Lights On Celebration on Saturday and the day's other holiday venues at various spots in downtown Hollister.

Early in the day, people had already begun to reserve their seats on the sidewalk of San Benito Street for a close-up of the parade that would begin at 5:30 p.m.

Hollister Downtown Association Executive Director Brenda Weatherly said planners were not deterred by the coming rain. “We will have a parade rain or shine for as many people who show up. We adjust the program for a rain venue,” she said.

It wasn’t freezing, but definitely coat weather, but nothing seemed to deter those stout people who showed up to take part in the town parade.

It started to rain, umbrellas came out, and one person was seen with a plastic bag on her head.

At about the time people began to show up for the Lights On parade, the Mars Hill Coffeehouse welcomed people in for a hot drink.

“We have the whole staff here tonight. It’s great. We love to work together,” Darla Hernandez said, adding, “This is one of our busiest nights of the year.”

By 5 p.m., the coffee house had a line from the coffee service area to the front door.

People were also warming up in some of the stores that remained open, such as a smoke shop, and the San Benito Bene store.

The Holiday Boutique, inside the Veterans’ Memorial Building, was another warming-up venue with music played by Joe Ostenson’s, Mr. O’s Academy of the Arts, and a variety of booths.

Heather Hickerson and Cindy Gillen were seated at a booth for the Women’s Club raffle, with the proceeds of the raffle to benefit charities.

Serenity Crafters, owned by Shawn Sinclair, sold wood crafted products, but it was the melted snowman ornament that caught the attention of many.

By 5 p.m., San Benito Street was full of people, and the parade got started on time. It consisted of around 80 entrees, and right after the parade, pictures with Santa were available outside the Veterans’ Building.

For even more photos from the event, courtesy of Gary Cameron, click here.