Family and former students speak about Mr. O as music teacher, jazz bandleader, and pillar of the community. 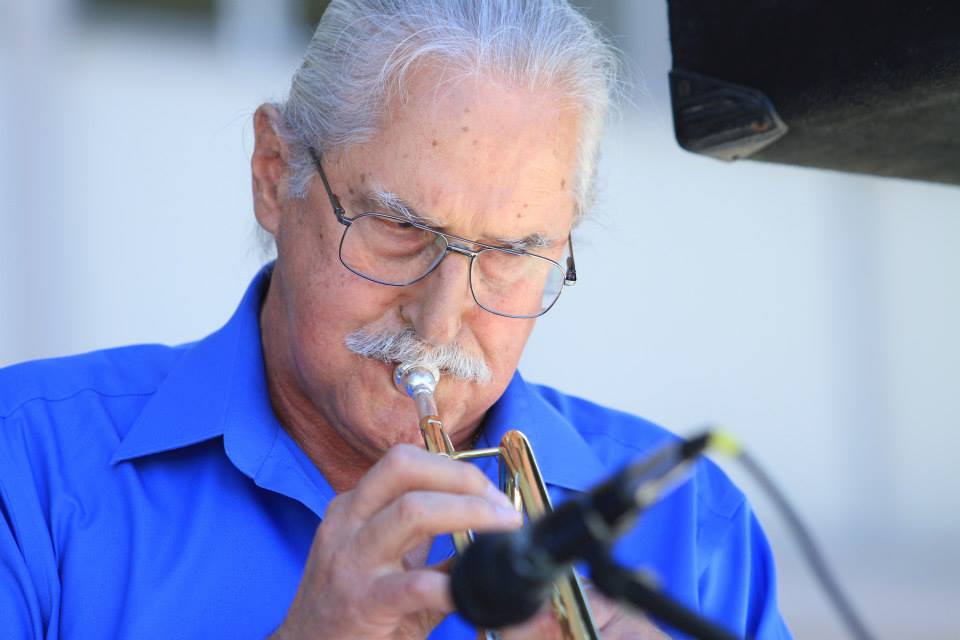 On the night of Jan. 3 around 9:15, Joseph R. Ostenson died in the Mabie Center of Hazel Hawkins Memorial Hospital. He suffered a fall in late November, and after a month in the hospital he did not recover. He was 79 years old.

Ostenson moved to Hollister in 1964 and took a position teaching band at R.O Hardin Elementary School. He intended to stay for about a year before moving on, but before he was enticed away, he met a young woman named Francine at a social event for teachers. They were married in 1966.

At the time, R.O Hardin was the only middle school in town until Rancho San Justo was opened in 1969 where Ostenson created a considerable band program. “Anybody that played a musical instrument, back in those days, had to go through Rancho San Justo,” said land surveyor and former band student Ken Weatherly. “He put his mark on every band student that went through there.”

Of his teaching practice, professional saxophonist Les Pierce said: “Joe Ostenson would sit down with each of us. He’d give us all the help we’d need. It was just so much easier to learn with him.”

Ostenson’s daughter, Jenn Ostenson, remembered that her father “would take anybody who played any instrument, and whether you were a great player or a player who was struggling, he would find a part for you and you would be part of a group.” In practice this meant that “my dad spent hours every single day, every single weekend, rewriting music so that everybody could play it.”

Rancho music teacher Susan Silveira recalled that Ostenson, who stood six feet tall, worried about intimidating students who were just hitting their own growth spurt. “I think that was very sweet,” she said.

After five days teaching band, Ostenson would retreat each weekend to a studio at the former Robin’s Music Store, on the corner of Fifth and East streets in Hollister, where the former She’s Consignment Store was located until recently. There he gave private lessons in his own instrument—the trumpet—to dedicated students. Two of these trumpet students were Curtis Williams and Kevin Cline, owners of the Kaycal Music shop located within Mr. O’s Academy of the Arts at 360 Sixth Street. (The Academy closed last July but Kaycal remains open.) Cline remembered that “every week in the ’70s and ’80s, he would load a bunch of us into his car and take us over to Gavilan Junior College, when Gavilan had a band we would go and play in.” Williams recalled another trip, students spilling out of the Ostenson van, to a Maynard Ferguson concert in San Jose.

The students’ relationship with the couple, often referred to as “Joe and Francie,” deepened during decades of participation in musical events throughout the Central Coast, Central Valley and Bay Area. Cline said that by high school, after years of barbecues, rehearsals, performances and trips, “Joe and Francie were kind of like my second set of parents.”

Jenn Ostenson recalled that “from about 1985 to his retirement, my mom and I played a very supportive role. She was mostly in charge of uniforms and materials, whereas I was in charge of color guard and drumline and helped him with marching band and stuff. It was a humongous family organization,” supplemented by the volunteering parents of the students.

Some of Ostenson’s band students, like Pierce, became professional musicians and stuck around within a 100-mile radius. Others, like Weatherly, remained nonprofessionals. Mino Valdez, who ran a small recording studio in Mr. O’s Academy, said “Being in Mr. O’s band was definitely something that a lot of people didn’t stick with.” He proposed that “they didn’t become professional musicians, but that connection they had to the community—I think that’s really what Joe taught in the end.”

Over the last 10 years, Williams said, many ex-students stopped by the academy to say hello to their old band teacher. He and the others remembered this happening anywhere Ostenson happened to be.

Jenn Ostenson said of the Facebook post announcing her father’s death, that most of the commenters—over 500 at last count—were former students.

In 2010, after Ostenson had taught for 45 years at Rancho, the music program was threatened by Great Recession-era budget cuts. Silveira told BenitoLink that around this time Ostenson became “the face” of the Save the Music fundraising campaign, which was led by Tony Weir, Steve Chase and Anthony Ortega.

“Everybody knew Mr. O,” Silveira said. “He was synonymous with music.”

Mr. O retired from Rancho the same year, at age 69, and his former students promptly put together a retirement party for him. An alumni band was assembled of students from all throughout his career, from Rancho’s class of 1969 to its class of 1996. Cline recalled that Ostenson had always wanted to publicly perform a Leroy Anderson piece called “Bugler’s Holiday,” which requires three trumpet players, but had never had the chance.

“We put together not three trumpets—not six —but we had nine trumpets,” said Cline. “And we had the opportunity to stand up in front of all these people and fulfill Joe’s dream of doing ‘Bugler’s Holiday.’ And I’ll never forget, when we had done, he reached over, he shook my hand, and he was crying.”

But as Valdez told BenitoLink, Ostenson was impossible to put away for good. Indeed, within two years of retirement he opened Mr. O’s Academy. He and Valdez were seeking at the same time to found an arts center in the same building, so the property owners introduced them to each other. It didn’t hurt that the owners of the building that became the Academy were the Hoyle sisters, who had played wind instruments for Ostenson many years before.

Valdez said, “I can’t imagine being him, setting his sights on some property he wants to build his space in, and then suddenly from behind the property owner curtain comes these two former students, who ultimately were pivotal in making that work for him.”

Jenn Ostenson agreed that her father couldn’t be retired, recalling a sentiment of his: “You can play sports and do other activities for a short amount of time, but music is something you can do until you’re old and gray.”

At the academy, Ostenson allowed local musicians to give low-pressure, one-on-one lessons. In addition, engineers like Valdez were allowed to record novice musicians, and new musicians got to mix with more experienced ones in his jazz band, which never charged a fee for its performances up and down the Central Coast.

Pierce remembered that when “he threw me a solo, he’d throw in a story about me, about playing way back when. But he would do the same when one of the kids, maybe a middle school student, would put out some extra effort. He’d tell a story about them over the microphone.”

Valdez said that “Francie and Joe were very involved in everything together, and he will be sorely missed, but I think he’s left a legacy for sure.” He compared Ostenson to the protagonist of the movie “Mr. Holland’s Opus,” about a band teacher who doesn’t realize the enormous impact of his teaching until he retires.

Chuy Hernandez and his wife Rosalinda Sanchez moved to Hollister from San Jose in 2018, and since then have come to understand some of Ostenson’s influence on local culture. “The majority of the musicians in the area obviously had a huge respect for Mr. O,” Hernandez said. Sanchez had heard stories from virtually all musicians in the area, and from non-musicians, about how he taught music to them or their loved ones. When he started to teach a Mexican folklórico coro at the Academy, Hernandez found himself in awe of the presence of the emperor of music on the Central Coast; Ostenson admitted that he was himself impressed by Hernandez’s students and teaching.

Hernandez and Sanchez are setting up the California Academy of Novel and Traditional Arts (CANTA) at 360 Sixth Street, the former site of Mr. O’s Academy. They plan to offer lessons in mariachi instruments, dance, choir, videography and other arts.