People living near the park claim homeless are encamped and committing crimes, making it unsafe 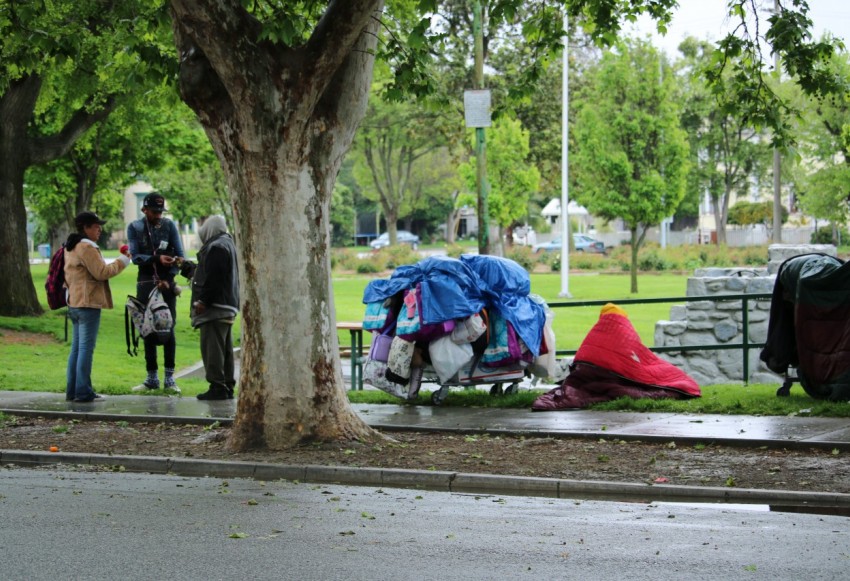 Residents who live across from Dunne Park want enforcement of laws to curtail what they say is illegal behavior by the homeless. Photos by John Chadwell. People often say, “Being homeless is not a crime,” but those who live around Dunne Park west of downtown pleaded during the public comments portion of the April 17 Hollister City Council meeting for someone to enforce the law. When it comes to the recent onslaught of homeless individuals who camp out there, several residents claimed the homeless are committing numerous crimes, including loitering, theft, assault, lewd behavior, sexual acts and harassment.

Sharlene Van Rooy, who lives on Fifth Street, said it has been more than a year since the homeless were evicted from the San Benito River near Fourth Street and a number of them have moved to camp at Dunne Park. She said the homeless who are bused from the Southside Road warming shelter to Dunne Park have become neighbors with a man known as Rodney, who has lived there for several years. She asked that if the city could evict the homeless from the riverbank, why can’t they do the same at Dunne Park.

“Being homeless is not a crime, but according to the San Diego Police Department, public conduct that is illegal for anyone, includes: urinating and defecating, camping and sleeping in parks,” she said. “All are activities that occur daily in Dunne Park, along with others too numerous to mention.”

She said citizens of San Diego are encouraged to report such actions or even make citizens’ arrests, while such reports in Hollister “fall on deaf ears.”

“We are asking the city to stop turning a blind eye,” Van Rooy said. “The city, as well as prosecutors and judges at the county level, need to do more to alleviate this problem. Families and children who play in the park and neighbors who live adjacent to it should not have to witness these acts. We’ve had enough.”

Tricia Harvey, co-owner — with her husband, Greg — of Joshua Inn Bed & Breakfast, located on the corner of West and Seventh streets, across from Dunne Park, said in the past, she had taken pride in Dunne Park and that her and her husband care about the homeless. She said there was a time when they hired several of them to do chores and paid them well.

“Now, a lot of them don’t want to work because they’re getting so many handouts,” she said. “What we’re noticing is that the few have grown to a huge number that affect everyone. At night, they roll their carts and yell obscenities.”

Harvey said she and guests have witnessed oral sex acts taking place in plain sight. One particular blonde-haired woman (to whom a number of residents referred) constantly wanders through the park screaming. Harvey said she didn’t understand how the homeless could steal grocery carts with impunity, fill them with trash and loiter at all hours.

Jennifer Rodriguez, a teacher who recently moved to Seventh Street with her husband, and whose family has lived there three generations, said some homeless have invaded her home. She said that one day when she tried to hold an event in the park, the blonde woman was naked.

“When I asked her to put some clothes on she assaulted me with a knife and the police had to come out and take her,” she said. “Every time we go to the park there’s another incident and we don’t know if we can even set up events there anymore. That’s said because the city has invested so much money into renovating Dunne Park.”

Rodriguez said the park is no longer safe for events and children shouldn’t be there because of the needles, condoms, fecal matter, urine, and other trash left behind.

“They wash their clothes in the restroom and then hang them on a line,” she said. “This is not an encampment, this is a community park where people should have the ability to take their children and be safe.”

Rodriguez held up photos for the council to see, pointing out one man cooking on a range and a couple nearby who were having oral sex, obviously unconcerned about who saw them.

Another woman said she recently had to tell two homeless people who were stealing wood to leave her neighbor’s yard. She said she has seen police drive up to the park and see the blonde woman ranting and they would give her the “well, she’s not hurting anybody look” and then drive away.

“The kids who come to visit know they can’t use the restroom,” Rodriguez said. “Yes, I do have a restroom they can use, but not every kid does. Children go in there and there is urine and feces everywhere. The Public Works people who come in there every morning and clean the place are doing a great job, but we’re just asking for help on the enforcement side. Give (Hollister Police Chief David) Westrick and his officers some type of shopping cart ordinance or encampment ordinance where they can actually get rid of these people.”

In 2013, the Coalition of Homeless Service Providers identified 365 homeless individuals in San Benito County. Today, no one is really sure just how many homeless there are because not all of them hang out on street corners, area parks, or collect benefits. Some working homeless live in cars or rundown RVs parked along side streets because they cannot afford to rent or buy a home here.

Juli Vieira, president and CEO of the San Benito County Chamber of Commerce, told the council that a second business was being affected by the homeless population. She also said a number of tourists who have come by the Chamber after walking around Hollister have told her about the mess they saw at Dunne Park.

“That’s cutting into our tourism and is giving us a bad reputation,” she said. “We’ve had our plants stolen three or four times and we know where they are. We find them at Dunne Park.”

Vieira said the Chamber initially planned a community event, “Join your Community Picnic,” but has since opted for another location.

“For business, for tourism, and for the people who live in the community, we need your help,” she said.

Barbara Saunders moved to the area in 1984, and lives two blocks from Dunne Park.

“In my front yard, between Fourth and Central, I find used ‘family-planning devices,’ needles, bottles, and occasionally, out under the street light directly in front of my house, I see things that make me thankful I don’t have kids living here anymore,” she said. “Besides being disgusting and immoral, it’s sad that nothing is being done to help these people find a better place and a better life.”

Westrick told the council that he had recently attended a training session on mental health and the homeless. He said the problem in Hollister is that it has so few services to get them the help they desperately need.

“The homeless society is a microcosm of our own,” he said. “There’s folks who have medical problems, there’s those with addictions and mental health problems that are magnified when they become homeless.”

He said that while there may be ordinances that could possibly help the situation, many have been litigated in other cities unsuccessfully.

“We have to be smart in the administration of some of the ordinances,” Westrick said. “When we do some of the actions, they’re not being prosecuted and the jail wouldn’t take them because there just isn’t the room. It’s a system-wide problem that we need to tackle.”

The chief said he wanted to study the issue and perhaps take a team approach could be used that would involve police officers working with nonprofits to move some services forward.

“We don’t have a lot of services, but we have a chance to develop some good partnerships with other counties that have the same problems,” he said. “I know it’s a problem and it’s increasing.”

City Manager Bill Avera told the council that he will contact the county to get the status of the homeless shelter and other programs it may be working on. Mayor Ignacio Velazquez commented that the new homeless services center is slated to be completed by November.

The AHSR report went on to say four in 10 individuals with chronic patterns of homelessness in the United States live in California. Some 29,802 were chronically homeless, with 25,892 of those living outside shelters. The largest homeless populations in the nation live in three California cities—Los Angeles, Long Beach and San Jose. 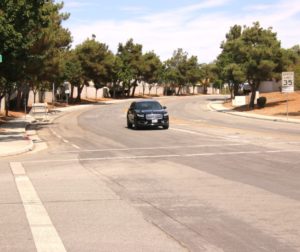 Section of Union Road to be renamed Cesar Chavez Way