Former residence of Rev. Havens and his family. 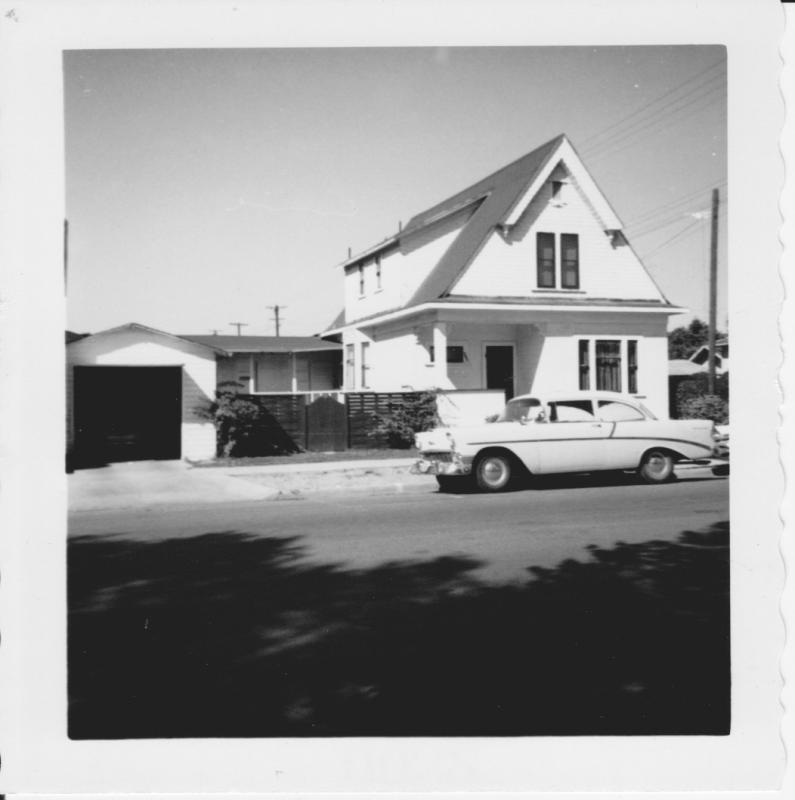 Editors' note: This is the second in a multi-part series on the life and times of local Rev. David W. Havens. To read Part 1, click here.

Eager to begin his career, Rev. Havens was without a ministry. He was certain he didn’t want to remain in the South nor return to the Midwest—regions where his father’s reputation would have produced a litany of opportunities. As he stated, he wanted to move out of his father’s shadow and become his “own man.” (1) A man he was becoming, too. He had married Suzanne Shively, and they were making plans for a family.

In search of work, Rev. Havens blanketed potential areas of the country with letters of inquiry. The only response came in the form of a desperate plea from the general secretary for the Disciples of Christ Northern California headquarters. The official lamented that there was a struggling church in a small agricultural community called Hollister that was without a pastor—evidently the former pastor had so infuriated the congregants that many had left the church.

Rev. Havens welcomed the challenged and accepted the position as pastor of Hollister’s First Christian Church in February of 1961. Hollister’s Evening Free Lance featured a article on Rev. Havens’ appointment, complete with a brief biography of the new minister and his wife. (2)

Once located at the corner of Monterey and Seventh streets, Hollister’s First Christian Church opened in 1869. The property included a parsonage located at 634 Monterey St., and for the two years they called Hollister home the Havens resided there. The property changed hands several times over the years. Today it’s owned by Grace Bible Church. The former church building now serves as a children’s education center, while administrative offices and a nursery occupy the Havens’ former residence.

In March, the Havens became official residents of Hollister, their arrival announced in the “society news” of the Free Lance. (3)

After settling into his new home, Rev. Havens introduced himself to his parishioners, who numbered no more than 30 and whose “average age was around 80.” (4) This impromptu meeting was followed by an installation ceremony held at Hollister’s First Christian Church on the evening of March 17 in which the “entire community” of Hollister was invited to attend. (5)

For the Disciples, an installation ceremony formally bounds the new pastor to his congregants, creating a covenant and a vision shared by all in the church community.

Formalities aside, Rev. Havens’ genial nature soon won over the congregation, though it was unprepared for his unorthodox style and leadership. For example, he once asked parishioners to clear the pews and sit on the floor in a large circle while he delivered a sermon. He later realized that this was probably not something his elderly congregants would routinely appreciate, so he ended the practice. Not surprisingly, the bond and trust between Havens and those of Hollister’s First Christian Church grew stronger over time.

Rev. Havens shaped his ministry in other ways, too. He established a youth group, a weekly radio program, and a book club. But what defined the church under Havens was its commitment to community service, especially its service to the area’s migrant farm laborers.

During his time in Hollister, Rev. Havens witnessed the transformation of farming as a family-run enterprise to a corporate endeavor.

Rev. Havens recalled that he and his parishioners assisted with the harvesting of apricots on behalf of their fellow congregants who owned small farms. As he described, “[i]t was a whole community effort…a grand experience.” (6)

Rev. Havens added that the relationship between the small farmers and their seasonal, Mexican workers was close and personal. But the idyllic setting soon unraveled with the arrival of the corporate farm. With deep pockets, the corporations muscled their way into rural America, ushering out the small growers.In addition, they reduced their overhead by pressuring legislators into passing laws that allowed for an immigrant labor force that lived in conditions resembling WW II era “prisoner camps.” (7) Devoid of protections afforded to other employees in America, these immigrant laborers were mired in poverty.

This transformation had huge implications for Hollister, as it was unprepared to handle the challenges. Moreover, Havens witnessed the fraying of the social fabric that once held the tight community together. As he stated, “we were divided by town folks and ‘those people out there’ who lived in the camp…”(8)

In an effort to build bridges between the two communities, Rev. Havens reached out to his congregation that willingly answered the call. Some offered money to help migrants pay for food. Others shuttled the workers from their homes to town. A local doctor felt compelled to offer free medical care. Of his congregants, Rev. Havens admitted he was bold over “with their willingness to serve the needs of others.” (9) Rev. Havens had accomplished one of the tenants of true leadership—imparting a vision to others who then make it a reality.

Unlike his many of his contemporaries who found life in the ministry full of challenges, obstacles, and the intransigence of their fold, Rev. Havens found a community full of individuals who were “open and accepting’” and whose support he credits with “invigorating his service to the church and to others.” (10) Of his experience as the minister of Hollister’s First Christian Church, Rev. Havens humbly stated, “looking back on this period I now realize how unique and unusual was this first ministry.” (11)

Rev. Havens has difficulty today recalling the names of the all individuals who he met during his time in Hollister, but there is one who he has never forgotten—the late Dr. Robert (Bob) Quinn.

Dr. Quinn and his first wife, Riva, moved to Hollister in 1955.. Upon his arrival, Dr. Quinn quickly “fell in love with it [Hollister].” He then opened a private practice, providing care to the community for over forty years, retiring in 1998. (12)

When the Havens moved to Hollister, Suzanne was pregnant with their first child. In need of a doctor, they were introduced to Dr. Quinn, who eventually delivered thousands of babies including both of Havens’ daughters, Megan (Margaret) McDonald in 1961 and Mary Rebecca in 1962.

What started as a doctor-patient relationship soon developed into a genuine friendship between the two families.

As Rev. Havens explained, he and Suzanne often played couples’ bridge with the Quinns. Suzanne and Dr. Quinn were exceptional card players who often teamed up against their spouses.

Rev. Havens also reminisced about the fishing excursions with Dr. Quinn, including the one to the Grand Teton National Park that he described as ”most incredible…trip I’ve ever had.” In addition, Rev. Havens recounted the the times when he and the doctor went diving for abalone in the Monterey Bay, fashioning their own neoprene wet-suits. (13)

Needless to say, the minister and the doctor enjoyed each other’s company and developed a very close friendship that lasted long after Rev. Havens left Hollister.

Reflecting on two years spent in Hollister, Rev. Havens described his memories as joyous and pleasant, though there are two which haunt him today.

The first involved a local woman who sought his help in saving a young relative from almost certain jail time and a precarious, uncertain future.

The woman’s 11-year-old, male cousin stole a car, robbed a liquor store at gun point, and led police on a high-speed chase that ended with the boy’s arrest. The boy’s parents and the Hollister woman pleaded with Rev. Havens to take charge of the boy, hoping that residing in a pastor’s home would change the boy’s deviant behavior. Rev. Havens spoke to Suzanne about the situation, but the two agreed that this arrangement would be difficult  given their growing family, as well as their lack of “skills or experience” in dealing with such a challenging child. Rev. Havens admitted that he should have intervened, and he often wonders of the boy, “Did he make it?” (14)

Another incident of regret occurred when Rev. Havens visited a group home for troubled and abandoned youth located outside of Hollister. He recalled that three children of the home sought his confidence in private. Their “desperate” pleas” for help were interrupted by the home’s director, a man who evidently was trying to hide something. Rev. Havens left the home and returned to Hollister. He realized that his responsibility was to contact the local, child welfare agency. Havens confessed that he “never alerted others to the need.” At times today, he rationalizes his inaction by suggesting that the children’s entreaties were perhaps products of his imagination. Whatever the truth, what’s telling is his final words an email: “ But their [the children’s] pitiful pleas for help still haunt me, and I took no action.” (15)

The brevity of Rev. Havens stay in Hollister was interrupted in 1963, as he was contacted by Chris Hartmire of the California Migrant Ministry (C.M.M.).

Founded during the Great Depression, the C.M.M. was an extension of the National Council of Churches. It was tasked with “bringing the ministry of mercy and justice to the California valleys.” (16) Until the 1960s, the CMM’s outreach consisted of camps and clubs for farm workers’ children, as well as “English classes, personal hygiene classes, and sometimes a well-baby clinic.” (17) Though badly needed, these offerings failed to address the causes of poverty the farm worker community found itself suffocating in. In 1961, Mr. Hartmire became the C.M.M.’s new director and his goal was “to do something about the causes of poverty.” (18)

To that end, Mr. Hartmire sought “radical and “political active” ministers who were supportive of labor. Rev. Havens’ work with the local, migrant farmworkers and his reputation as an unorthodox minister caught the attention of many, including Mr. Hartmire.(19)

Offered a position in January of 1963 as the director of the Kings-Tulare C.M.M., Rev. Havens accepted. Reflecting on his pastorate at Hollister’s First Christian Church, Rev. Havens stated in 1963, “[M]y work in Hollister has been a most satisfying experience, for I have learned much, and the experience has given me much more than I have been able to impart.” (20)

After two years in Hollister, Rev. Havens headed to the Central Valley where he learned the ins and outs of community organizing while working alongside Cesar Chavez and soon became a fixture of the N.F.W.A.’s lore for reading, “Definition of a Strikebreaker”—an act that led to his arrest.

(Please visit my blog, http://anunreadchapter.com, for additional photos accompanying this piece, as well as for other pieces on the lesser known history of San Benito County)