Local men who participated in the 1965 Selma March. An article on the local participation in Selma that appeared in the Free Lance, Monday, 22, 1965.

In 1963 Rev. Havens left Hollister for the Central Valley, where he served in the California Migrant Ministry and learned the valuable lessons of community organizing. 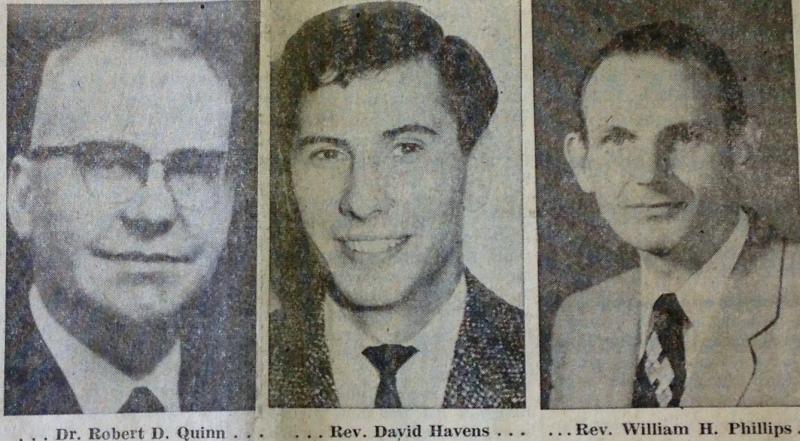 Local men who participated in the 1965 Selma March.
×

Editor's note: This is part 3 in an ongoing series. The links to the first two articles are are the bottom of this one.

The California Migrant Ministry to the March on Selma: 1963-1965

A two-and-half hour drive to the southeast from Hollister lies the city of Visalia. Situated in the heart of the San Joaquin Valley, Visalia is one of several cities along the Highway 99 corridor whose history is inexorably tied to the birth and maturation of California agribusiness, at times reaping its benefits while sowing seeds of discontent.

In February of 1963, Rev. Havens and his family moved to Visalia. As the new director of the Kings-Tulare California Migrant Ministry (C.M.M.), Rev. Havens was responsible for overseeing the coordination and cooperation of National Council of Churches’ affiliates in their efforts to deal “effectively with Farm Labor problems in the area.” (1)

Rev. Havens was among a handful of new C.M.M. hires. Under its director, Chris Hartmire, the organization filled its ranks with ministers who used their pulpit to combat the evils of poverty and injustice suffocating the lives of farmworkers.

And unlike their Catholic counterparts in the valley, these Protestant ministers didn’t mind soiling their hands. For example, Rev. Havens recounted a time when he and fellow C.M.M. minister Jim Drake spent an afternoon digging trenches for a community center serving the area’s migrant farmworker population.

Like many of their initial projects, the reverends pour their energies wholeheartedly in moving mounds of dirt that day. But Rev. Havens and Rev. Drake soon discovered that even though the farmworkers supported their endeavors they made little effort in contributing to them.

To a degree, the C.M.M. took a paternalistic attitude in its mission, never bothering to ask farmworkers what they felt they needed. Rev. Havens admitted that the organization’s “mantra was if they [farmworkers] won’t do it for themselves, then they don’t care enough.” (2) Rev. Havens and others within the C.M.M. failed to appreciate the fact that farmworkers knew what they wanted—a change in the power structure that permeated California’s fields and defined their lives. The problem was they didn’t know how to achieve it.

The two ministers had an epiphany while digging trenches under the hot Central Valley sun: What if they sought input from the workers in terms of what they wanted? What if the workers were empowered as decision makers? Would that change the dynamic and result in the workers picking up shovels, too?(3)

Unbeknownst to the ministers, this type of community organizing wasn’t a new idea. In fact, it was the brainchild of Saul Alinskly, a Chicago native who founded the Industrial Areas Foundation in 1939. Alinksy’s model was simple. Step One: go into a community and assist it in identifying areas of concern. Step two: identify community leaders, while training and cultivating them to galvanize others in an effort to create change. Once the disenfranchised were empowered and achieved victory, the organizer would leave, seeking another community in need.

In the 1960s, Alinsky’s recipe for successful community organizing became more palpable and popular among organizations, like the C.M.M. Soon, Mr. Hartmire sent both reverends Havens and Drake to Chicago for a crash course on Alinsky’s model.

The two returned to the Central Valley with practical knowledge, newfound confidence and renewed enthusiasm in solving farmworker issues. As Rev. Havens stated, “we understood more clearly our role as organizers and proceeded to search for leaders and issues for motivating action.” (4) They didn’t need look to far. The first test came in the form of a labor camp rent strike.

In his unpublished account, Memories of the Grape Strike, Rev. Havens writes:

One of the first issues that some farm workers wanted to correct was within a labor camp run by a local housing authority.  The Linell [sic] labor camp, just outside of Visalia.  The same labor camp described in Stienbeck’s [sic] book, 'Grapes of Wrath'.  The farm workers drew up a list of demands, presented it to the housing authority and organized a rent strike when those demands were denied.

The rent strike lasted a month, at which time the housing authority made concessions and vowed to improve the housing conditions. Reverends Havens and Drake celebrated with the workers who organized a victory parade through Visalia’s streets. Suddenly, farm workers and their supporters began to see the possibilities of a shift in the power structure that dominated California agriculture—a vision that became central to Cesar Chavez and the National Farm Worker’s Association.

During his tenure with C.M.M., Rev. Havens found time to extend his commitment to social justice beyond the fields of California. In March of 1965, Rev. Havens was contacted by old-friends he had met during the sit-ins in Kentucky. They explained that the civil rights movement was under attack (in literal terms) in Selma, Alabama, and it was in need of supporters to fortify its cause.

On March 9, a non-violent march led by Dr. Martin Luther King Jr. began towards Alabama’s state capital, Montgomery. The march was organized to bring attention to the racist policies that continued plaguing African-Americans at the voting booth despite recent legislation, like the Civil Rights Act of 1964, that sought to remedy the injustice.

As marchers began their 50-mile journey, they came under attack from state troopers on horseback, tear gas, police batons, and the snapping jaws of K-9 units. Retreating, the victims sought refuge in Selma’s African-American quarter.

Realizing the gravity of the situation, Rev. Havens didn’t waste time making plans for Selma. He placed a called to his dear friend, Dr. Quinn, explaining that the doctor’s medical expertise was needed as a result of the unbridled violence that pervaded Selma’s streets. Never one to shy away from danger where he medical services were needed—Dr. Quinn’s career was marked by countless humanitarian trips around the world, often piloting his own plane to areas of natural disasters or other calamities— the “Flying Doctor," as the doctor was often called, quickly prepared his private plane for its trip to Alabama.

Dr. Quinn admitted that his decision to participate in the events unfolding in Selma strained his relationship with neighbors, patients, office staff, and friends. As he explained, supporting African-Americans in their quest for voting rights didn’t play well to the “very conservative” community of Hollister.(5) Four others, including one minister from Hollister, two from Santa Clara County, and Rev. Havens, joined Dr. Quinn aboard his single-engine plane.

As the plane headed into the maelstrom, Dr. Quinn described his emotions, stating “adrenaline ran high and I was excited and turned on by it.” (6) The flight to Alabama went smoothly. But because of overwhelming air traffic in and out of Selma, the group was forced to land in Montgomery and shuttled its way to Selma, where for two weeks Rev. Havens and the others lived in a church.

During the day, the men passed the time attending workshops largely based on Dr. Martin Luther King Jr.’s time-tested 17 point strategy of non-violent, civil-disobedience. At night, the men returned to the church, for in the dark lured those who sought to teach outsiders to mind their own business. Rather than Rev. Havens’ white collar serving as a talisman—a thought shared by a professor in seminary—it was now taboo on the streets of Selma, as “[c]lerical collars invited violence in Alabama.” (7)

On the Sunday, March 21, the march resumed. This time more than 10,000 people swelled the ranks, including Rev. Havens and the others. Dr. Quinn and another physician drove ahead of the throng in a makeshift ambulance, anticipating a repeat of the earlier march. As the marchers made their way out the African-American redoubt, a gauntlet of threats, insults, and vulgarities fell upon them. Despite the dangers, the march continued toward Montgomery.

At the end of the first day, Rev. Havens and the others concluded their services were no longer needed and decided to return to California the next day. Their participation in this historic event was written about in the Hollister press. On Monday, March 22, 1965, the Free Lance featured a front page headline, “Local Men in Montgomery March” and included a article based on a telephone interview with Rev. William Phillips, a Hollister minister and one of the five men who accompanied Dr. Quinn and Rev. Havens.

The efforts of the five men weren’t lost on Selma’s African-American population. One woman thanked and praised the five men who were ‘willing to spill’ their ‘own blood for the rights of others.’ (8) When the five arrived at the Montgomery Airport, they conducted a thorough check-out of the plane, for fear of sabotage weighed heavy on their minds, especially as they were followed and confronted by an angry local on the tarmac who berated the men with insults and attempted to coax them into a fight.

The previous two weeks had prepared the men for such confrontations and nothing happened. They boarded the plane and began the trip back to California. As the plane departed, the men reflected on the past two weeks. Though they were relieved to leave the “hot bed of hate and violence,” they were equally reflective about the dangers, obstacles, and challenges that remained for those who faced “the hordes of white oppressors…every day of their lives.” (9)

The Selma march paved the way for the Voting Rights Act of 1965, effectively removing the obstacles of disenfranchisement for African-Americans in the Deep South.

Though not chronicled in Dr. Quinn’s, My Best Trip, the trip back to California almost ended in disaster. As the men began flying over New Mexico, they got lost and nearly missed a mountain. According to Rev. Havens, pilot error, weather, and fatigue all played a role in that close call. (10) Dr. Quinn brought the plane down safely in Albuquerque, where the men rested for the night before resuming their trip home.

For Rev. Havens, the streets of Selma were not the only environs where injustice seethed. He returned to Visalia emboldened by his experience, but exponentially more prepared for the battle that soon ensued between Cesar Chavez’s National Farm Workers Association and the powerful grape growers of Delano, CA.

(Please visit my blog, http://anunreadchapter.com, for additional photos accompanying this piece, as well as for other pieces on the lesser-known history of San Benito County)