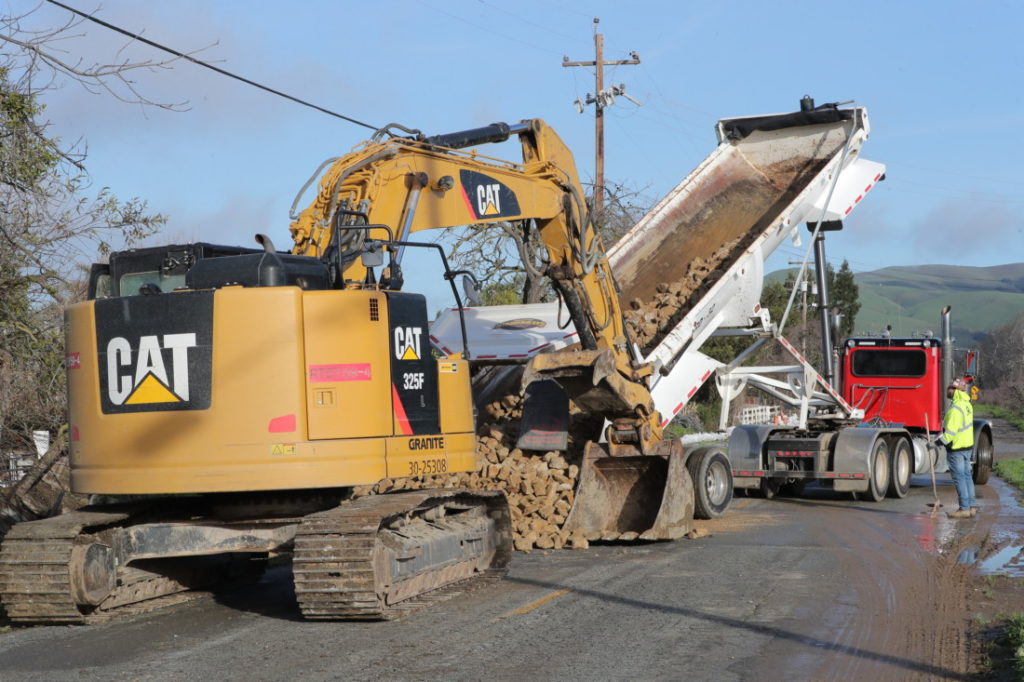 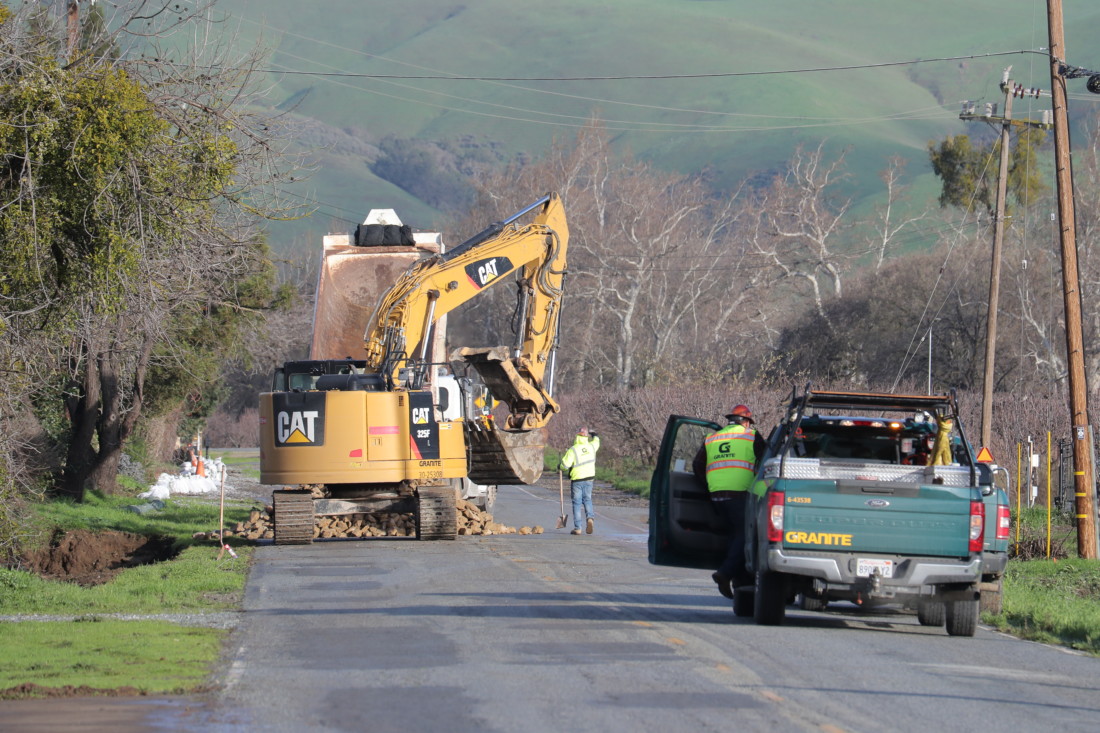 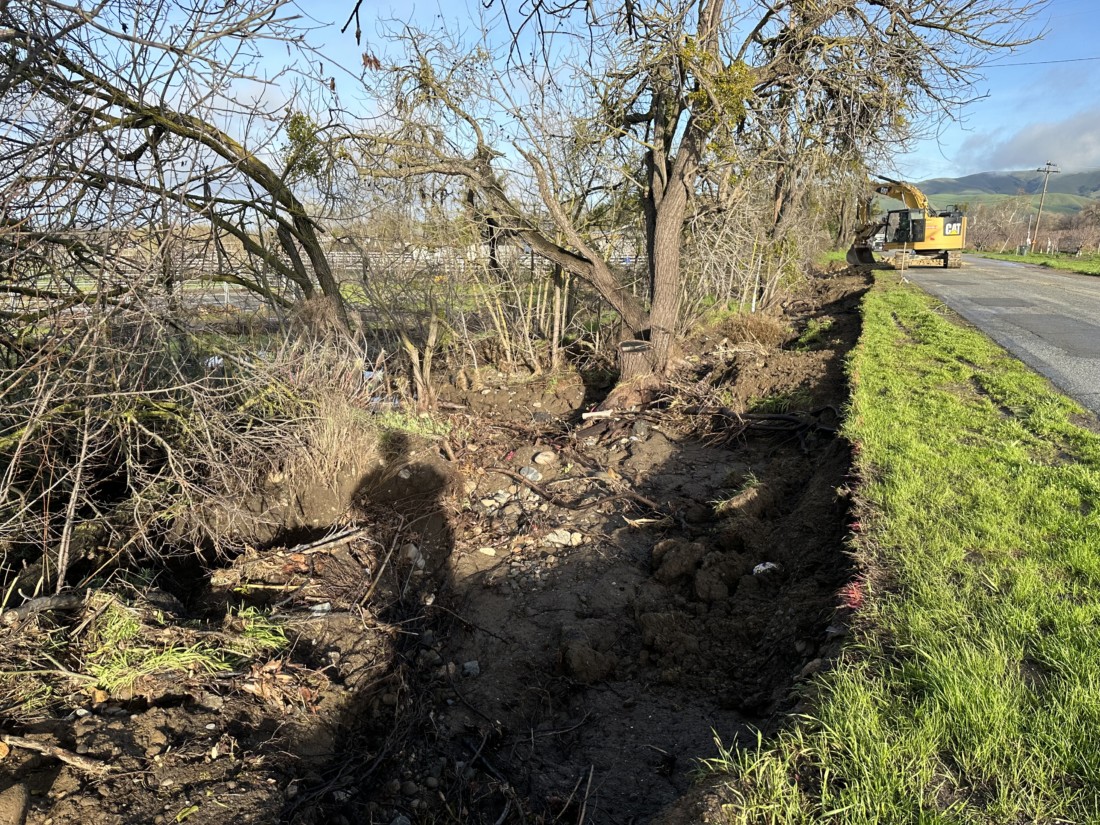 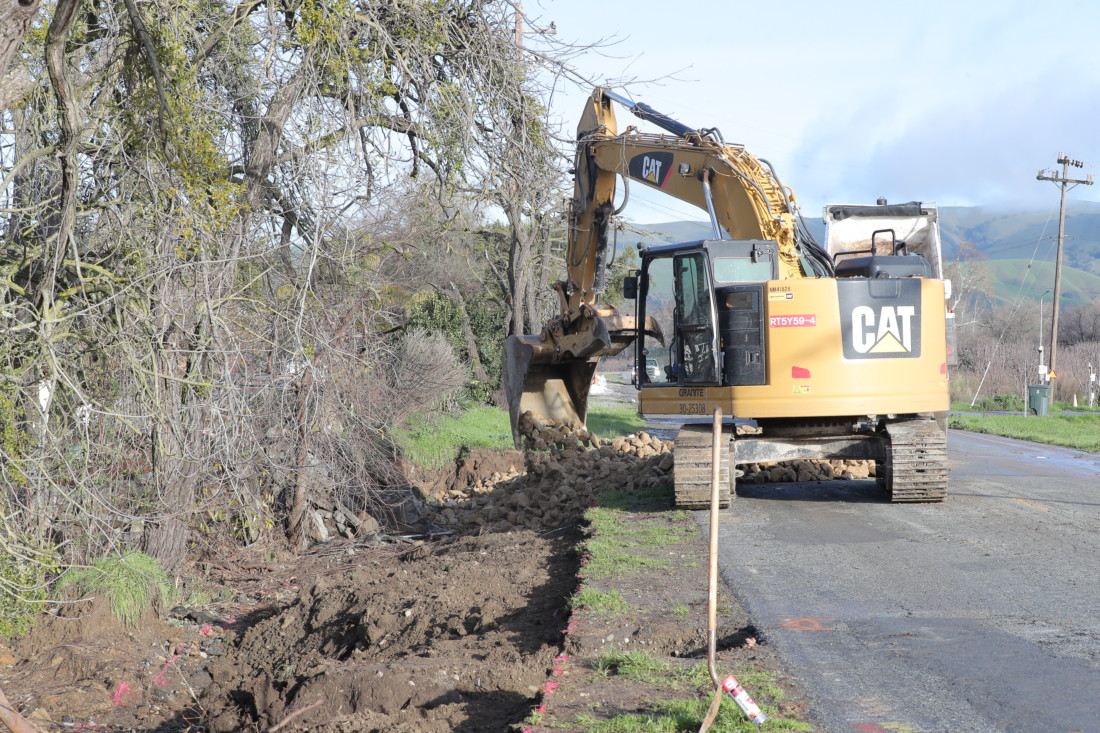 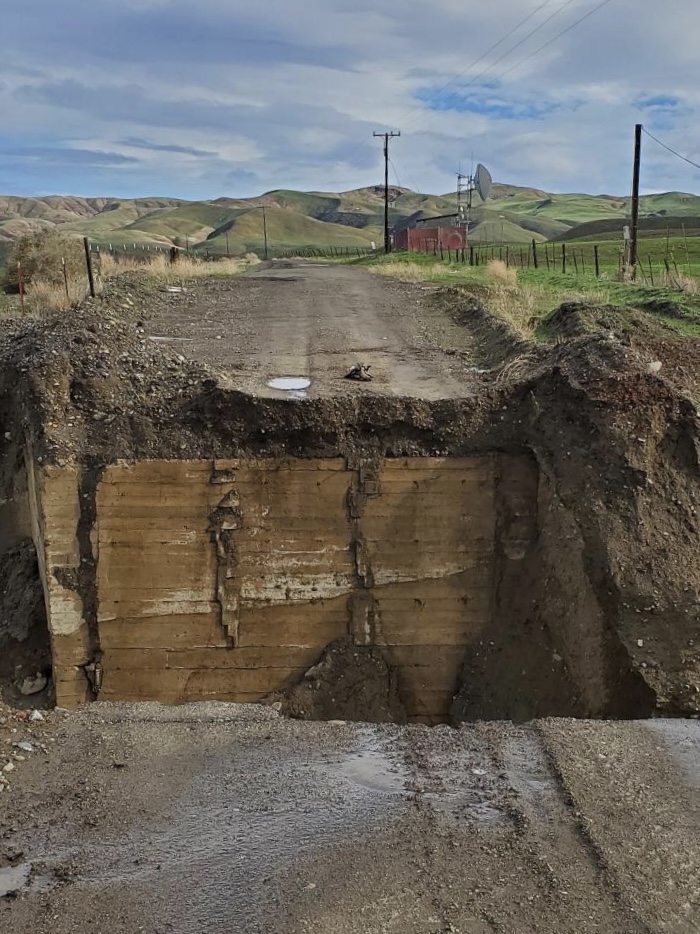 The work of shoring up Hollister’s San Felipe Road began on Jan. 19 in the area north of Shore and Fairview roads as Watsonville’s Granite Construction hauled in rocks to fill the washed-out embankments.

According to Steve Loupe, interim Resource Management Agency Director for San Benito County, repairing this kind of damage is one of the primary tasks his department will focus on before the next storm comes through.

He said the first priorities are removing fallen trees and assessing any trees damaged by the storm or creating a falling hazard due to loosened soil, as well as repairing potholes, which he described as “getting bigger and getting worse.”

There is also a large-scale project involving short-term road repairs, including the one being done by Granite Construction on San Felipe, and cleaning up debris, particularly from the upstream side of bridges and culverts.

San Benito County Public Information Officer Monica Leon told BenitoLink on Jan. 20 that the county did not have an estimate of the damages from the recent storms.

Loupe also said he would be touring the South County area on Jan. 23 to assess road washouts, particularly on Panoche, Coalinga, Old Hernandez, and New Idria roads. He plans to bring Graniterock Construction to the site on New Idria Road on Jan. 24, as it has received only temporary repairs since it washed out two years ago.

“We are going to provide a beefier fix there,” he said. “We did actually start the design of the permanent bridge, but it will not be installed until 2024 or 2025 because of having to get the environmental assessments done and submitted. That is a critical repair point because the washout has left half a dozen homeowners having to find low points on the creek to try to cross.”

Loupe said all road work had to wait until the rains stopped last week, and another storm could easily undo some of the current repairs to the temporary roads that have been installed for the area’s farmers and ranchers.

“This week, we’re installing some big pipe culverts in a few of those areas to help some of the water to get under the road and not just wash through the road,” he said. “But we’re a little bit at risk of having the temporary fixes wash out. They’re not normal roadway routes, and many of these problems are sort of predictable problems that will recur.”

Loupe said that many of the culverts in the area are old metal pipes that collapse easily, and they will be upsized and possibly replaced by different materials in some places.

“In New Idria Road, for example, we are going to be doing rectangular concrete culverts,” he said. “We’re finding that in some situations, those don’t plug as easily.”

Extensive road repair is needed in some areas just because of the age of the roads which were not designed for modern traffic.

“In the 1940s, the county accepted ownership of hundreds of miles of backroads,” he said. “Most of these roads have about only about an inch of either asphalt or what they call double chip seal and in the ’40s, you’re only getting five or six cars a day doing vehicle trips. Now they get all the traffic from 101 heading over Pinnacles. It’s getting 50 to 60 trips on weekdays and a few hundred trips a day during the weekends.”

Loupe said the work has been very difficult, but his workers are motivated by their love of the county.

“We just try to be the best servants we can,” he said. “Everybody pretty much takes a pay cut to work closer to home, compared to what they could get from a big commute to work in another city. That’s what happened when I left my job in San Jose. But you feel more like you’re helping the community. And I think that keeps us going.”

According to a 2021 report, there were seven vacancies among the 24 funded positions for roads. County Administrative Officer Ray Espinoza warned supervisors during the report positions fluctuate every day noting the presentation originally said there were 14 vacancies.