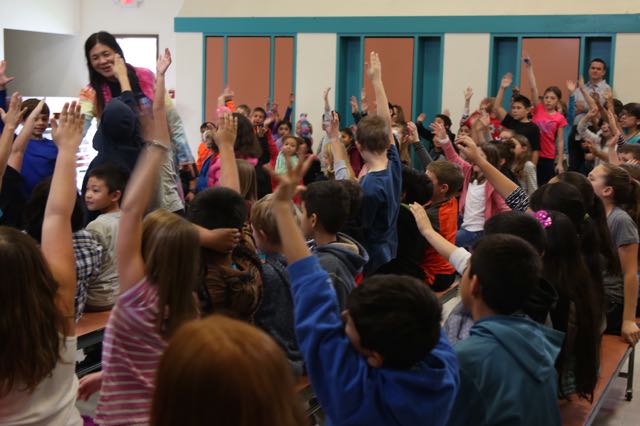 When Randal asks for a volunteer, he gets mobbed. “Raise your hand if you are interested in science because you are cool and smart and creative and fun” asks Randal Wung on Tuesday at Southside School outside of Hollister. The hands fly up. Short, little arms in pink sweatshirts, thick, strong arms in camo jackets, even arms that belong to the very mature and very cool eighth-graders go up.

The crowd responds enthusiastically because Wung is goofy and engaging and he makes science fun. He has long, black hair and his clothes are rainbow tie dye, reflecting the community from which he comes. Wung works for the Lawrence Hall of Science, based on the University of California, Berkeley campus.

The kids laugh heartily and they’re fascinated. They fight for his attention, just hoping he will call on them. This day, he has a gymnasium packed with students from several San Benito County rural schools. There’s a little bunch from Jefferson School, down in south county and another small group from Bitterwater-Tully School, even further away. Many of the county’s rural schools have only one or two teachers and can’t provide hands-on science in a normal school day.

Wung, a museum educator, has visited schools for 18 years, traveling in his blue Lawrence Hall of Science van all over the greater Bay Area. He is a performer, full of energy and determined to science fun. His specialty is teaching “hands-on science” assemblies and festivals. For the last several years, Southside School has offered to host seven rural schools for the event. E Cubed Foundation, a nonprofit, provides experiential science, art and drama classes to the rural schools from Tres Pinos to the southernmost part of the county..

After about an hour and a half of “Electrifying Science,” the crowd has seen a classmates’ hair stand straight up and heard the crackle of electricity. When the show ends, the kids leave with a fresh perspective on science.  Some may eventually end up with science-based careers.

Despite the excitement, Wung says the funding for the popular Lawrence Hall of Science educational programs is in the worst shape it has ever been. In the last few months, three teachers have left the program and there is a dismal mood around the education department. This year, staffers were given the grim news they would have to function without a third of their funding. “The department is struggling with the loss of $500,000 in budget cuts,” he said.

Wung estimates that Lawrence Hall of Science started providing “hands-on science” to public and private schools before the 1980s. He says that although the money to support the programs seems to be drying up, the demand is increasing.

As Wung finishes up his performance, students gather around him asking questions. If there are doubts about the value of the program, it only takes seeing the students light up to convince adults of the value of a dynamic teacher. “I’d like to book more. We would take all of this kind of thing we could get,” says Eric Johnson, the Southside School principal. He says his limitations are budgetary, not level of interest.

Lawrence Hall of Science (LHS) has the right recipe to engage young learners, but educators like Johnson were left wondering if students will continue to benefit from the special brand of magician/teacher LHS has provided for over 30 years.