Once again San Benito County residents came out to celebrate and honor our military Veterans on Monday. The sidewalks of downtown Hollister became crowded with onlookers of all ages for the patriotic event. 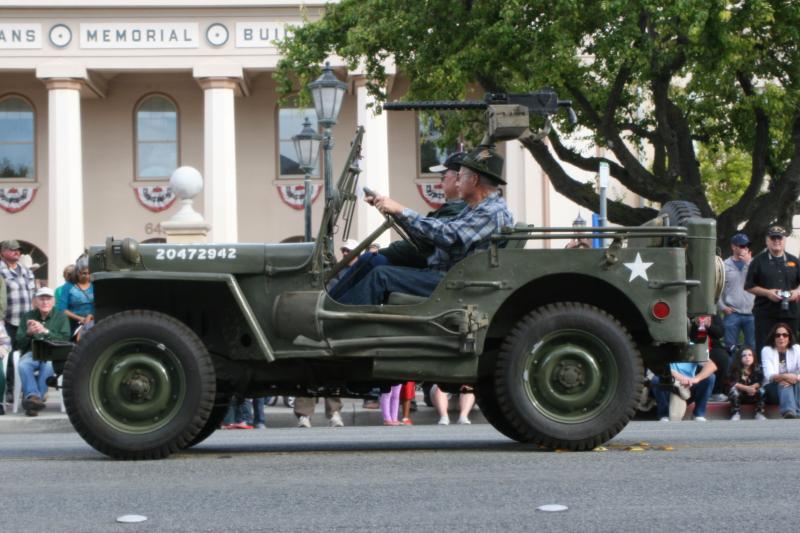 Once again San Benito County residents came out to celebrate and honor our military Veterans on Monday.  Following ceremonies and speeches at Veterans Memorial Building, residents congregated in front of the building and enjoyed festivities including a popular Army booth where Sargent First Class Janssen and Staff Sargent Arias, both of Gilroy, made metal dog tags for kids. Staff Sargent Arias has been deployed once to Afghanistan and twice to Iraq.

As parade time approached, the sidewalks of downtown Hollister became crowded with onlookers of all ages for the patriotic event. This year’s Veterans Day Parade kicked off with an airplane fly over and the singing of the National Anthem by a young Hollister resident who was a former American Idol contestant. Many were there to honor and celebrate relatives and friends who serve, or have served in the military and came bearing signs and photos to display their recognition.

The parade featured several organizations such as The Boy Scouts and Girl Scouts as well as two school bands, including the San Benito High School band, which performed in front of the Veterans Building. Also participating were military groups and honoree military individuals who received eager applause and rode in stylish classic cars or on flag-flying motorcycles to the delight of the crowd. Politicians Jerry Muenzer and Anthony Cannella also took part in the parade.  Downtown Hollister will also host another parade, The Lights On parade this November on the Saturday following Thanksgiving.