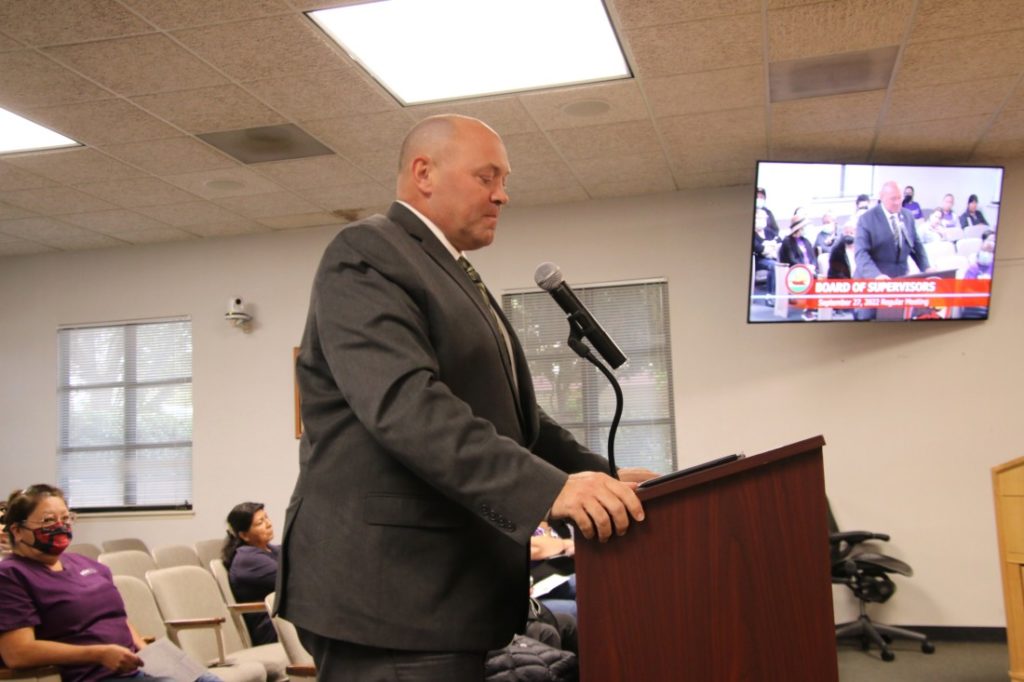 Sheriff Eric Taylor speaking to the San Benito County Board of Supervisors at the Sept. 27 meeting. Photo by John Chadwell.
×

Sheriff Eric Taylor told the San Benito County Board of Supervisors at its Sept. 27 meeting that crime is rising in the county.

Taylor said that since January, there’s been one homicide, 14 robberies, 33 assaults with a deadly weapon, 15 drive-by shootings, 34 calls for brandishing a weapon, 87 fights, 13 calls for gang activity, two calls for service for victims of gunshot wounds and 18 cases where firearms were recovered. The data, he said, includes Hollister.

Taylor told BenitoLink that calls for service of a victim of gunshot wounds does not include reports of drive-bys.

In one recent incident, on Sep.23 during a football game at Hollister High School, a fight began which resulted in a juvenile being slightly cut.

“Our staffing levels are critically low,” he said at the meeting, adding that since 2010, the Sheriff’s Department has been operating with a minimal staff.

“I’m going to be coming back to all of you with some ideas for recruiting to attract candidates to our county,” said Taylor. “I’m at the point right now where I’m all about collaboration, but everybody is so short staffed that I can’t wait for collaboration anymore.”

As a short-term solution, Taylor said he will move detectives from the Sheriff’s Department into a street enforcement role, and that this will result in not having a detective bureau for an indefinite period.