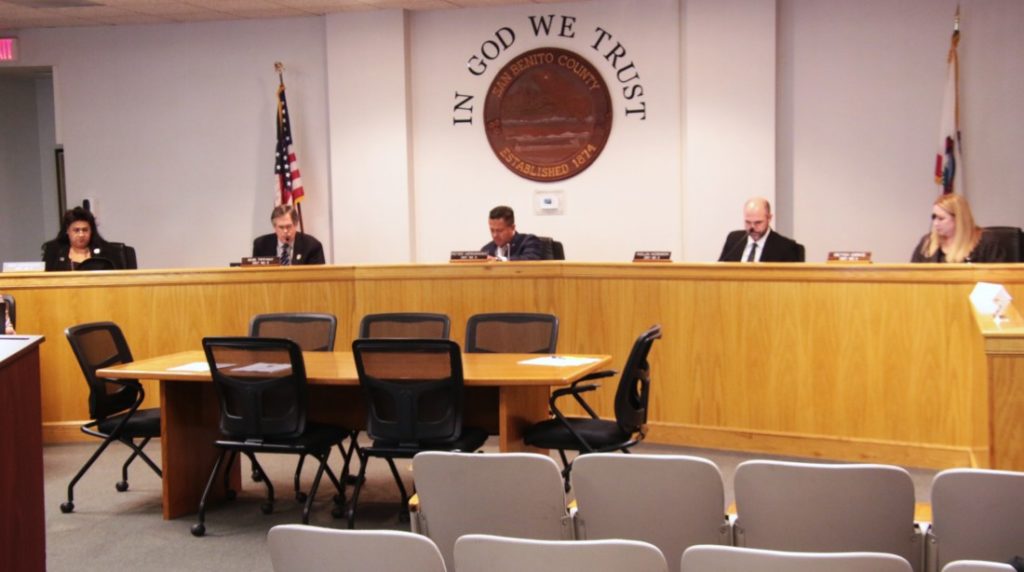 Supervisors agreed to wait until an economic impact study is done before voting on whether to put it on the Nov. 8 ballot. Photo by John Chadwell. 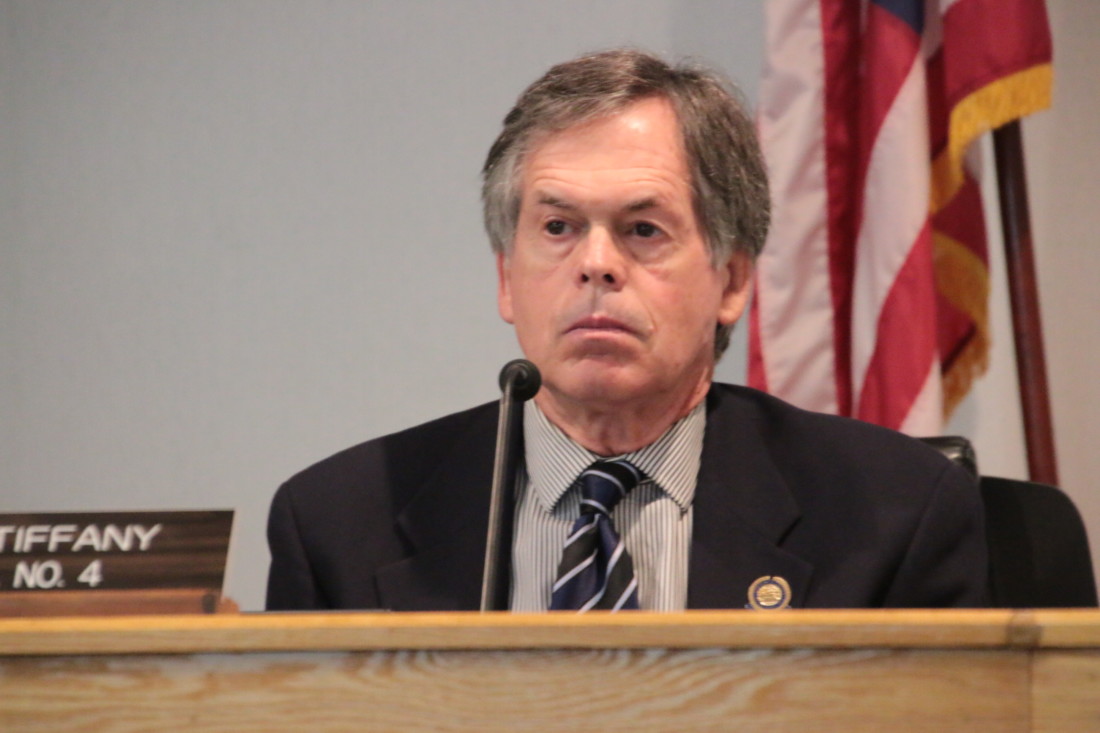 Supervisor Bob Tiffany said if the initiative were to pass it would gut the local economy. Photo by John Chadwell. 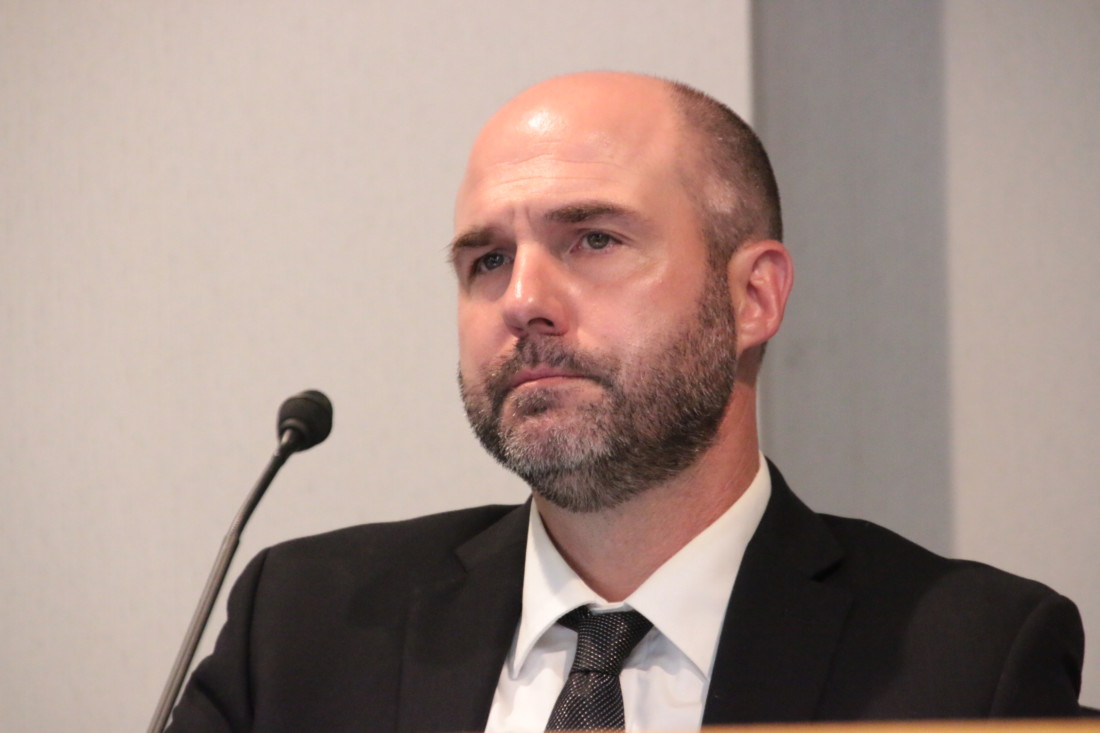 Supervisor Kollin Kosmicki said he changed his position on the initiative from supporting it to being neutral because he is no longer campaigning and needs to remain impartial on something voters will decide. Photo by John Chadwell. 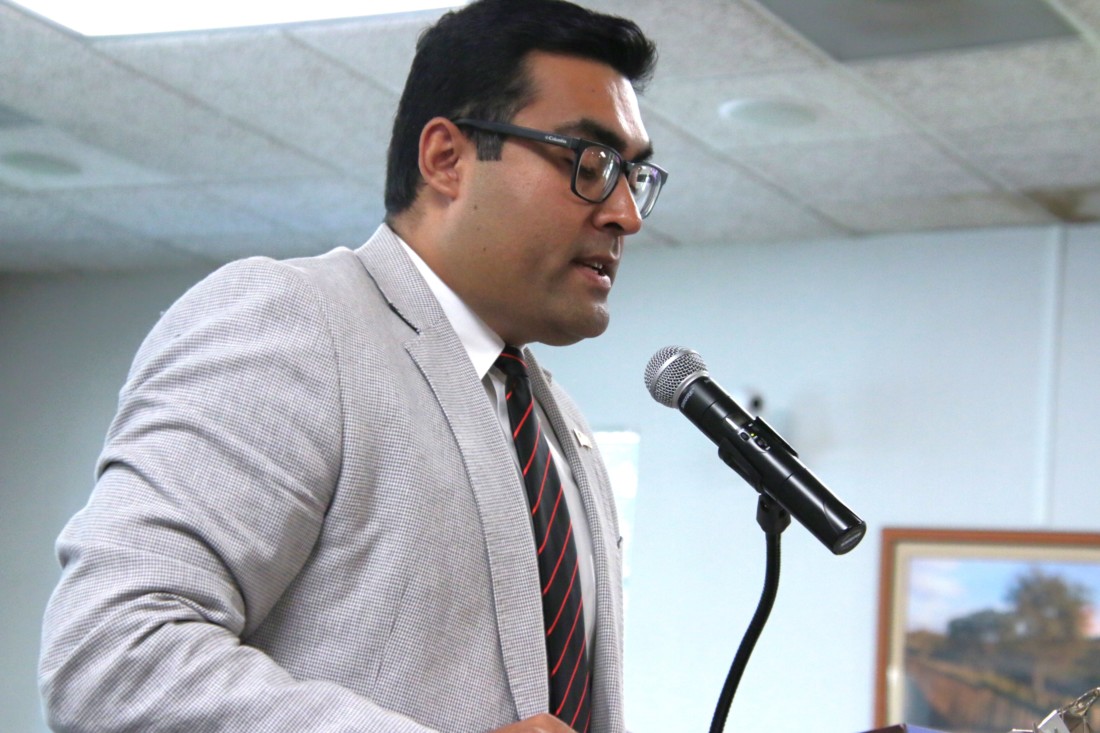 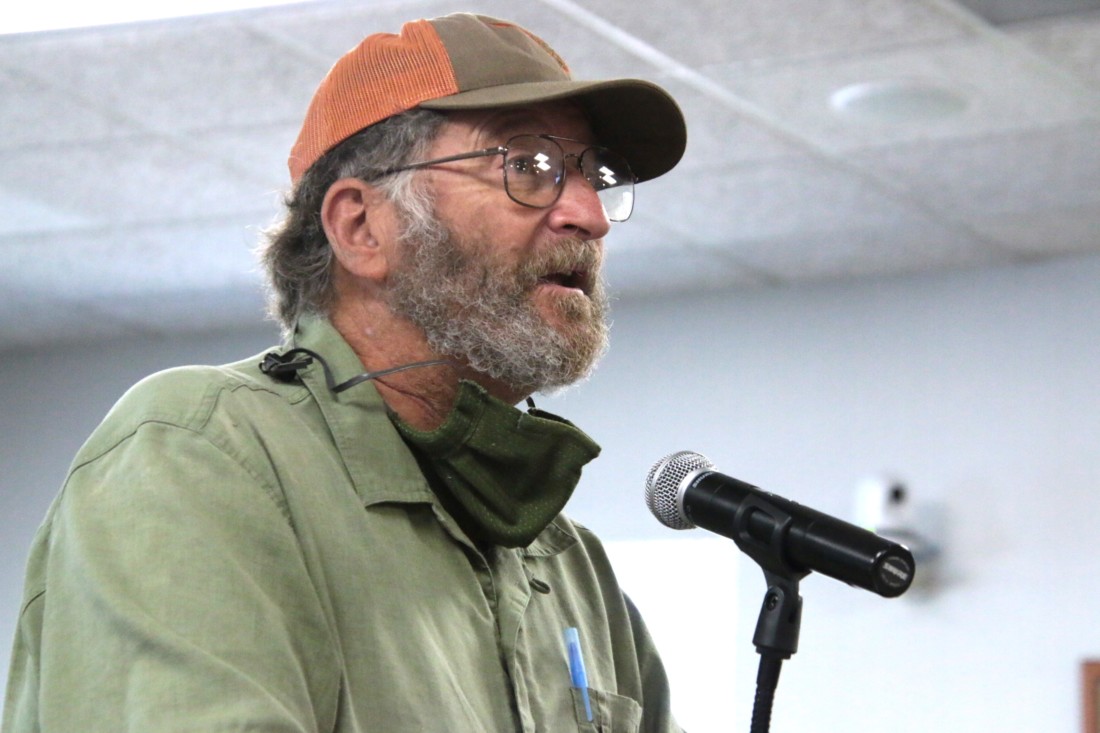 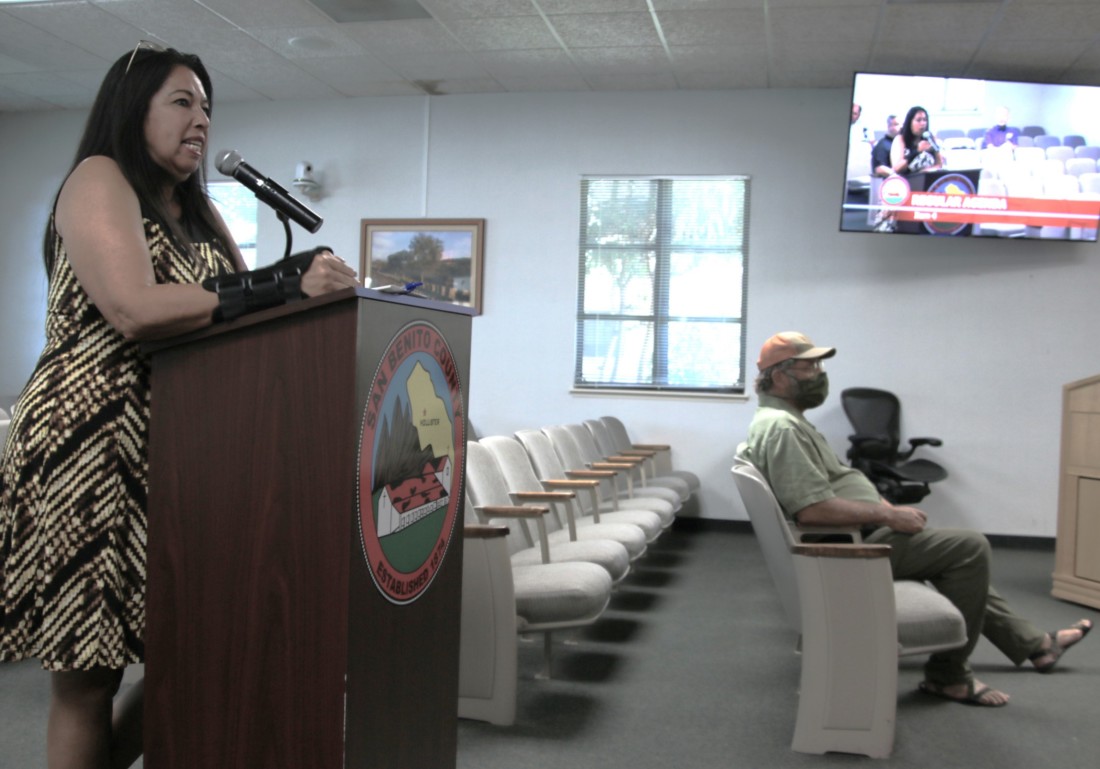 As Andy Hsia-Coron sat in the front row at the supervisor meeting resident Elia Salinas accused him of pushing an initiative based on lies. Photo by John Chadwell. 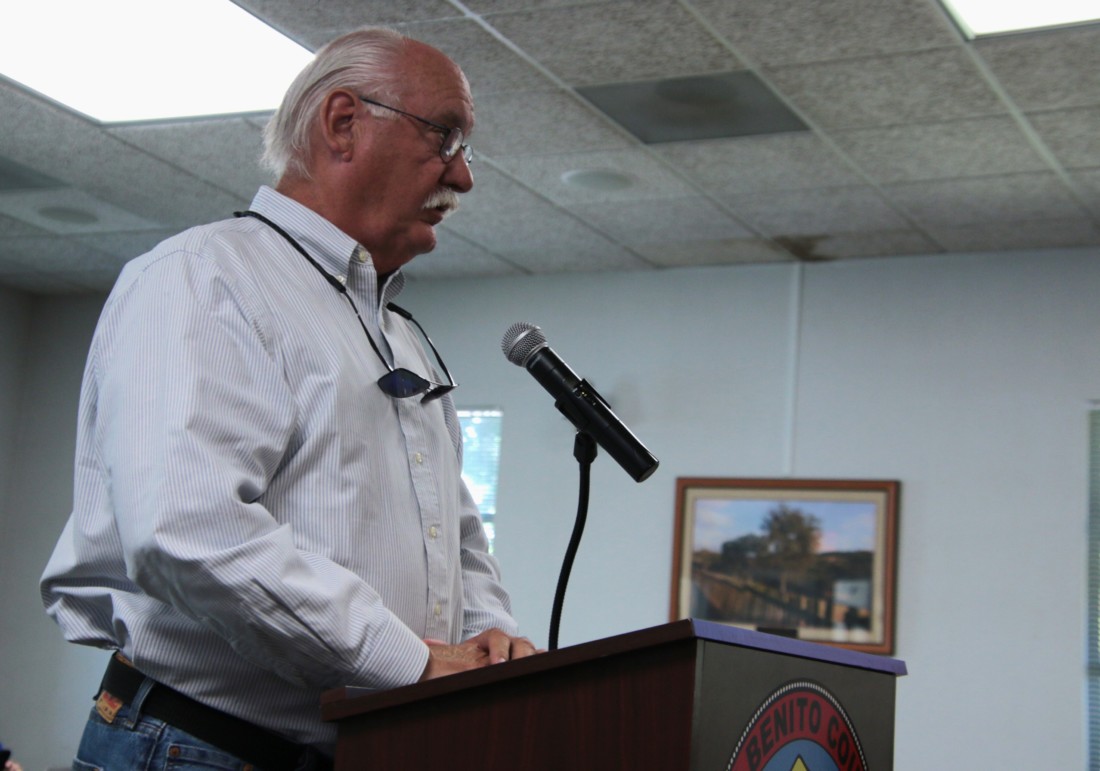 Ray Pierce said if the initiative passes residents will see their taxes increase to pay for county services. Photo by John Chadwell.
×

The San Benito County Board of Supervisors voted unanimously June 14 to accept the certification of an initiative petition to amend the county’s General Plan to remove commercial regional and thoroughfare node designations, and to require voter approval for future General Plan amendments re-designing agricultural, rangelands, or rural lands to other uses.

Francisco Diaz, assistant county clerk-recorder, told the board that on May 2 the Let Voters Decide How San Benito County Grows initiative petition had a raw count of 4,092 signatures. A random sampling and verification was applied to 500 signatures. The statistically valid signatures were 3,419. He said the 2,060 minimum required ballot signatures necessary to qualify for an election was surpassed.

Diaz presented the certification of the initiative and advised the board they could take one of three actions:

He said, however, that because the supervisors had already commissioned a report on May 24, the staff recommended the report be presented to them at the next meeting, June 28.

Once the economic impact study is brought back to the supervisors, they will likely place the initiative on the November ballot as the majority of the board does not support it, and so will let voters decide on development planning for the county.

During public comments, Andy Hsia-Coron, president of the Campaign to Protect San Benito, the group behind the petition, said he had talked to numerous people who were concerned about the patterns of growth, traffic, water and the changing quality of life.

“I’m sure it will be actively debated once it’s on the ballot,” he said. “As to whether you should do an economic report, I’m ambivalent. I think an economic report will be purely speculative, since we don’t know how much people would deviate from where you [supervisors] would vote on these issues.”

He asserted developers would, “cherry-pick sound bites to put in their advertisements. I imagine their budget for this campaign will dwarf anything that we’ve ever seen in San Benito County. Hold on and be prepared for the onslaught of literature and advertisements.”

Resident Elia Salinas said the petition was presented to the public with “intentional misinformation.”

“The initiative is based on lies and they continue to lie,” she said. “Unfortunately, the people will vote on misinformation. Those who are opposed to this initiative will have to do double the work to make sure the voters are informed.”

Local realtor Ray Pierce, who at the time was a San Benito County planning commissioner and attended General Plan Action Committee meetings for two years, said there were seven years of meetings and public workshops. He said the commercial nodes, or designated areas for commercial or industrial development, were always included and experts said they would be a tax base for the county. He added that without them, residents would see their taxes increased to help support the county.

He also questioned the validity of putting the initiative on the ballot after the committee spent years developing the General Plan that included extensive California Environmental Quality Act investigations.

“Now you’re talking about removing something without CEQA,” he said. “It sounds like this is an illegal petition. If we had to do all that work in order to incorporate all those elements in the General Plan, how can ballot box planning just reverse it overnight? I’d advise you not to encourage this in any way.”

Before voting, Supervisor Bob Tiffany said even though the board had no choice but to certify the signatures, he repeated his assertions that San Benito County could not be compared to wealthier counties where similar initiatives had passed years ago.

“We are a poor county and revenue is a huge issue to this community,” he said. “If this were to pass it would gut our ability to have economic development and sales tax coming in through commercial and industrial projects. The proponents of this initiative are saying let the voters decide, but the problem is I’ve not seen a project yet in this community they are in favor of.”

He continued, “I can guarantee you if this were to pass, they will continue to pass on their misinformation and try to defeat every economic development project that will come before the voters. I look forward to the economic report that will show how devastating this initiative will be to the community.”

Asked where the economic numbers will come from, Tiffany told BenitoLink he wasn’t sure. Supervisor Kollin Kosmicki, who has maintained he is neutral on the initiative, said, “These economic impact studies, I don’t care what the issue is or what side you’re on, they’re essentially used as advocacy. I’m not a fan of them.”

Kosmicki told BenitoLink that he supported an earlier version of the Let Voters Decide How San Benito County Grows initiative because he was campaigning for supervisor, and now that he is in office his position has changed because he doesn’t believe an elected official should voice an opinion on something the voters would be deciding.

Nodes, the part they play in county general plan and how that could change