75 students gather to show their concern for a national problem 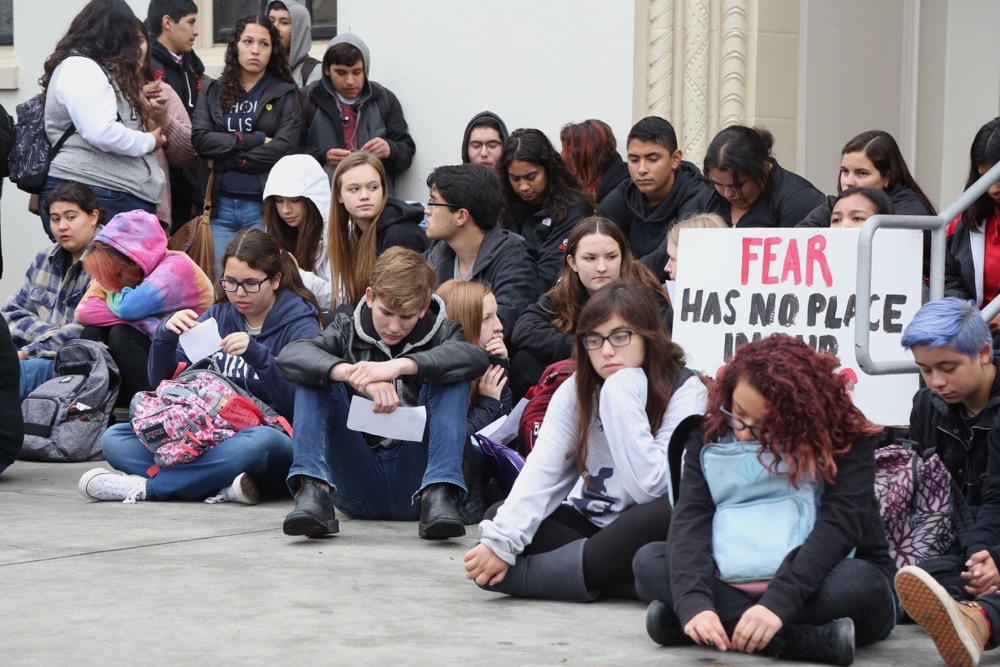 Students gathered on the front steps of San Benito High School on Wednesday to commemorate the 17 people killed one month ago at Marjory Stoneman Douglas High School in Parkland, Florida. The Hollister walkout, prompted by a national call for protest, was quiet and somber. Hollister police and school staff stood with umbrellas in the light rain, allowing students to have their time to remember the incident and address the issue of school violence nationwide.

Senior Melyssa Spandri spoke to students at the front steps of the main office. She said it was time to move beyond “18th century rules” and asked students to embrace the day’s events by committing to nonviolence and remaining “civilized.”

There were no loud protests and no misbehavior reported.

Adam Breen, Communications Director for San Benito High School was on hand and said that students had approached the school administration in a cooperative way and aimed to disrupt the school schedule as little as possible.

A letter was sent by San Benito High School administration to parents prior to the event notifying them of the administration’s plans.

“The recent tragedy in Parkland, Florida, and other losses of life on school campuses across the nation over several years have driven increased interest in student-led civic engagement efforts,” the letter to parents said.

“We are reminding students and community members to be open to varying opinions and to keep communication and behavior toward one another peaceful, respectful and safe,” the letter continued. “We are not facilitating one message or belief over another; rather, we are creating a safe space for all students during a time many wish to explore and exercise their right to free speech.”

Some students arrived earlier in the morning for a short period of silence in recognition of the Parkland shooting, then went on to class.

The remaining 75 or so students could afford to take class absences or were determined to take in the whole experience, listening to a few prepared speeches.

At the walkout, senior Andrei Vladimirov handed out a commentary he had written and shared his thoughts with BenitoLink.

“I think gun violence is part of a larger issue,” he said. “We have to look at history. The Second Amendment has helped some but repressed others. It helps powerful people and people who profit off [gun] sales.

“And profit can become the motive really behind everything,” Vladimirov continued. He said people should have the right to protect themselves but that “money ignores lives as if profit were more valuable. There are so many issues like water, labor rights and housing.” He summed up by saying it was a larger issue that will not be resolved by just focusing on guns but on society.

The San Benito High School Board of Trustees passed a resolution Tuesday urging the state of California and the U.S. Congress to “implement common sense measures that prioritize student safety and environments where all students have the opportunity to learn, grow and thrive.”

The resolution states that safe schools “provide an environment where teaching and learning can flourish; disruptions are minimized; violence, bullying and fear are absent; students are not discriminated against; expectations for behavior are clearly communicated and standards of behavior are maintained; and consequences for infractions are consistently and fairly applied.”

The resolution also asks Congress to pass specific legislation that reduces the risk and severity of gun violence on school campuses and repeals the prohibition against data collection and research on gun violence by the U.S. Centers for Disease Control.

The resolution noted that there is a perception of decreased safety on school campuses. Statistics show that overall violence has dropped since a peak in the early 1990s, according to the CDC, which tracks gun violence statistics.

At San Benito High School, students like speaker Spandri do not feel safe at school. Classmates sat close together as Spandri read off the names of the 17 individuals who had lost their lives. At the end of her short speech she said, “It’s crazy to think kids are scared to come to school.”

Closing off the presentation, senior McKinzie Lothrop asked students to join her for a 17-minute silence. They huddled together in the mild drizzle, honoring the victims in Florida and other recent campus tragedies. 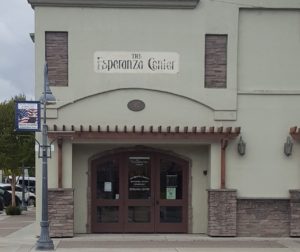