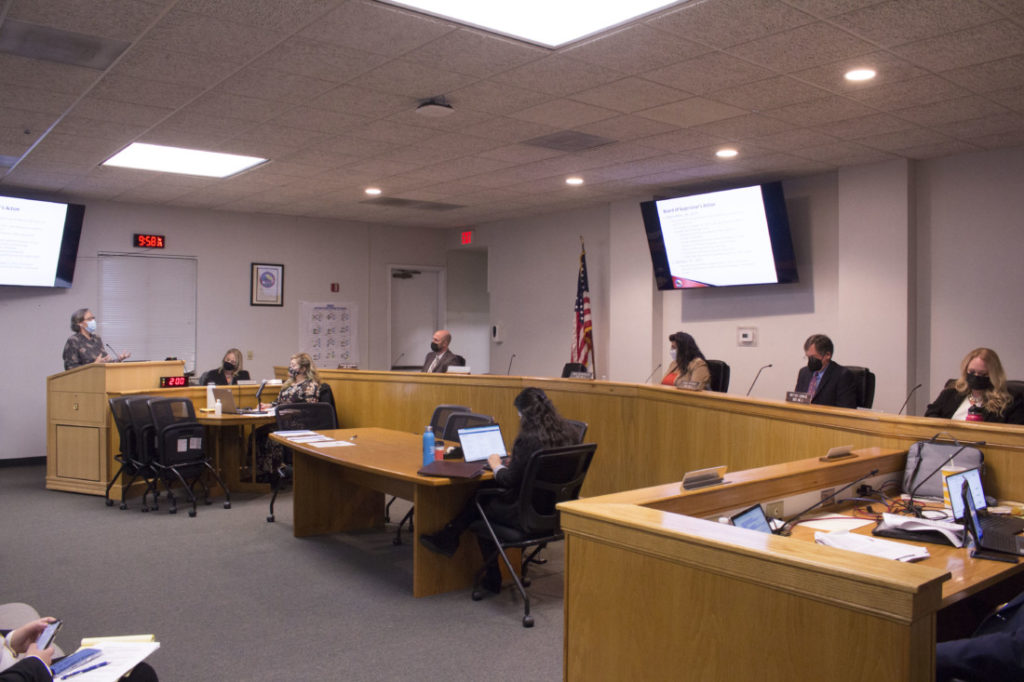 Robin Bolster-Grant with the county Resource Management Agency presents the ordinance changes to the Board of Supervisors on Nov. 9, 2021. Photo by Noe Magaña.
×

Having issued no permits for cannabis cultivation since it adopted its regulations in December 2018, San Benito County Board of Supervisors on Nov. 9 made changes to the ordinance in an effort to issue more permits and attract new revenue. Supervisor Peter Hernandez was the sole no vote.

Robin Bolster-Grant with the county Resource Management Agency said various factors account for the lack of permitted cannabis cultivation in the county, such as the federal prohibition of cannabis. Because that prohibition continues, operators have difficulty obtaining loans and insurance.

“All of this is really just to see, if we make a few changes, does that change the equation at all,” Bolster-Grant said.

The changes approved by the county on Nov. 9 include allowing cannabis businesses in the Airport Safety District, allowing outdoor cultivation in areas where hemp is allowed, eliminating the application evaluation process, and eliminating a local fingerprint background check. The state already requires a background check before issuing a state license. Business owners need both state and local permits prior to operating.

Other changes include eliminating the requirement of cannabis employees to obtain a work permit from the county, removing the limit of how many business permits the county can issue, establishing a 500-foot setback for outdoor cannabis cultivation from the nearest residential structure, and allowing commercial cannabis distribution.

Hemp is a cannabis plant that contains less than .3% THC, the main psychoactive compound in marijuana.

Bolster-Grant said that unlike hemp, outdoor cultivation of cannabis may require mitigations for odor, secured fencing and cameras, a licensed security guard and multiple inspections by three state agencies in addition to county inspections. In addition, she said the state tracks cannabis from seed to sale.

“We have confidence that the restrictions in place both at that state level and locally can make sure that these sites operate in compliance with regulations,” Bolster-Grant said regarding outdoor cannabis cultivation.

Among those regulations are state permits that limit outdoor grows to one acre per applicant (medium permit) or a quarter of an acre (small permit). However, Bolster-Grant said the limit of one license per applicant might change. There is no limit to how many small permits an applicant can obtain, she added.

Supervisor Bea Gonzales said she is aware of at least five businesses that are interested in seeking a permit but are hesitant because of the one-acre limit.

“The state was concerned that corporations were going to come in and buy up all the land or lease all the land and have these giant, giant cannabis farms,” Bolster-Grant said. “We haven’t seen that probably because of the federal prohibition but there has been a push to protect the small farmers, the local farmers.”

Sheriff Eric Taylor said that while others tout the economic benefits of the cannabis industry, he was not as optimistic. And whether the industry becomes a money maker for the county or not, he said he will need two additional staff positions to enforce regulations.

“I do think that we can catch things on the local level that they may or may not catch on the state level,” Taylor said. “We have access to arrest records that aren’t really conviction records, but they are arrest records.”

The board directed staff to create a resolution on background checks to add to the current cannabis ordinance. It will need the board’s approval at a future meeting.

Taylor also said that he wanted an ordinance that allows the county to revoke permits when operators are out of compliance.

“We’ve had local people that were fined $1,000 a day,” Taylor said. “They were paying $30,000 a month like it was nothing and still operating an illegal business. That is not fair to the deputy sheriffs, it’s not fair to the people that live and work here and go to school here. It’s just not okay to turn a blind eye because [they’re] paying fees.”

Hernandez said based on what the county experienced when it was investing a lot of staff time in changing hemp regulations based on a potential project, he wanted a process that ensured cost recovery, which he said these changes do not provide.

“A perfect example was this big commitment and promise from Gilroy Gates,” Hernandez said. “There was a lot of effort from us to make it work for them and with them, and sure enough we committed a lot of staff time. And it all died—it all went away. So we lost money on that and the public doesn’t know that.”