SJB City Council is considering a ban on "extreme drilling" practices in its general plan. 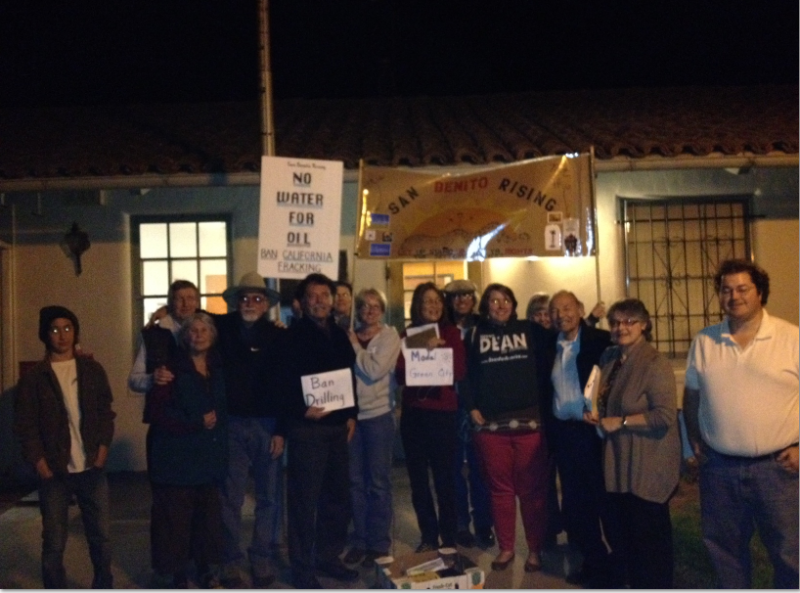 Over twenty people showed up at the San Juan Bautista (SJB) City Council meeting to support a ban on fracking and drilling within our city limits on Tuesday, December 17, 2013. San Benito Rising (SBR), a grassroots activist organization in San Benito County, dedicated to the purpose of educating the public about the dangers of enhanced oil drilling techniques and presenting sustainable alternatives, presented a proposal to the City Council of San Juan Bautista, “The Case for Banning Fracking & Extreme Extraction.”  SBR member Andy gave a PowerPoint presentation and city council members asked many questions, requesting that sample language from other municipalities to ban fracking be supplied to them. The city council wants to discuss this topic further at their next meeting in January. Eleven people spoke during the public comment period in support of a proposal that SJB write a ban on enhanced drilling techniques within the city limits, into the city’s general plan.

Again on January 21, 2014, SBR presented the second part of their presentation to the SJB City Council, titled “Becoming a Model Green City or City of History & City of the Future.”  SBR members Andy Coron, Nancy Aimola, Tim Tompkins and Chief Sonne Reyna spoke. Several pages of petitions were submitted, collected from local residents, requesting that the city place a ban on extreme extraction process in their general plan.

Mary Hsia Coron reported that councilperson, Tony Boch exclaimed: "I want to be the first city to ban fracking, and I want to be the city of the future!" Councilwoman Jolene Cosio said she loved the "City of History and City of the Future" concept. Earlier, city officials said that after a reading of the ordinance banning drilling recently submitted by SBR, the city council would then vote for a ban. SBR has also been discussing ideas for securing donations to fund solar panels for city government facilities.

Included here is a photo of an enthusiastic group of San Benito Rising members who filled city hall seats, brought signs and enjoyed a snack at a local restaurant, after their presentation.  Video streaming of all SJB City Council meetings are available at CMAP site:  http://cmaptv.org/?page_id=23.  The January 21 SJB city council session should be available for viewing by now. The SJB city council meets the third Tuesday of each month. SBR is requesting that interested citizens join them at the next few meetings until a ban is actually passed as the city council has not completely determined if they will vote to include this ban in their general plan.

To exercise your citizen rights at the state and national levels is to sign a petition from LA County's Citizen's Coalition for a Safe Community. Ban Fracking in California is a petition by Aura Walker to be delivered to The California State House, The California State Senate, Governor Jerry Brown, and The United States House of Representatives.  California is already earthquake prone. Fracking will exacerbate the risks of earthquakes as huge hydraulic drills will core deep into the earth, moving already loose tectonic plates. Additionally, poisonous gases will permanently pollute many precious aquifers, irreversibly poisoning our drinking water. Please follow the sane example of Vermont, and Ban Fracking in California. http://pac.petitions.moveon.org/sign/ban-fracking-in-califoria?source=none&fb_test=0.

Let’s remind ourselves to consider our local resources and economics.  Our county is highly dependent upon agriculture and to some extent tourism.  The threats of enhanced oil and natural gas drilling, could ruin this environment, by polluting our water aquifers, air and roads, from unusually heavy traffic due to thousands of truck trips to and from drilling sites.  The oil companies claim they are bringing “jobs” to our area, but the facts show that these jobs go to “outside oil workers,” while potentially threatening our livelihoods.

On January 17, 2014, Governor Brown declared a Drought State of Emergency in California.  Since SJB already has one of the highest water rates around, it is imperative that we protect what little we have of it.  Local ranchers are selling their cattle, because of a lack of water to raise them. Fracking adds a sizeable chance for Corporate Oil to contaminate our water supplies, we could end up like Coalinga, CA, a city that has no potable water reserves. Coalinga is built on a fault that went bad in 1983, polluting their water resources.  The processes of enhanced drilling techniques have caused earthquakes in locations where there was no known seismic activity.  Plenty of studies from Oklahoma, Texas and Pennsylvania have proven this unintended consequence of fracking.  In a seismically active area like ours why would we want to risk this sort of irrevocable damage here?

Add to this the fact that most of these enhanced drilling techniques use millions of gallons of water to extract these resources, contaminating it with potently lethal chemicals, and either leave it in open ponding basins to “gas off” and pollute our air, or pump it back into the wells, where it can potentially pollute our aquifers.  So the very resources upon which we, the public, must survive are being used against our own good.  Is this how we want to live? 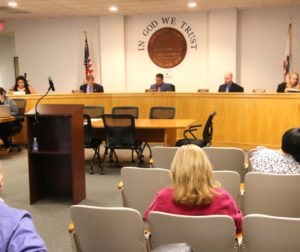