Group prays and shares words of hope for detainees and vulnerable community members. 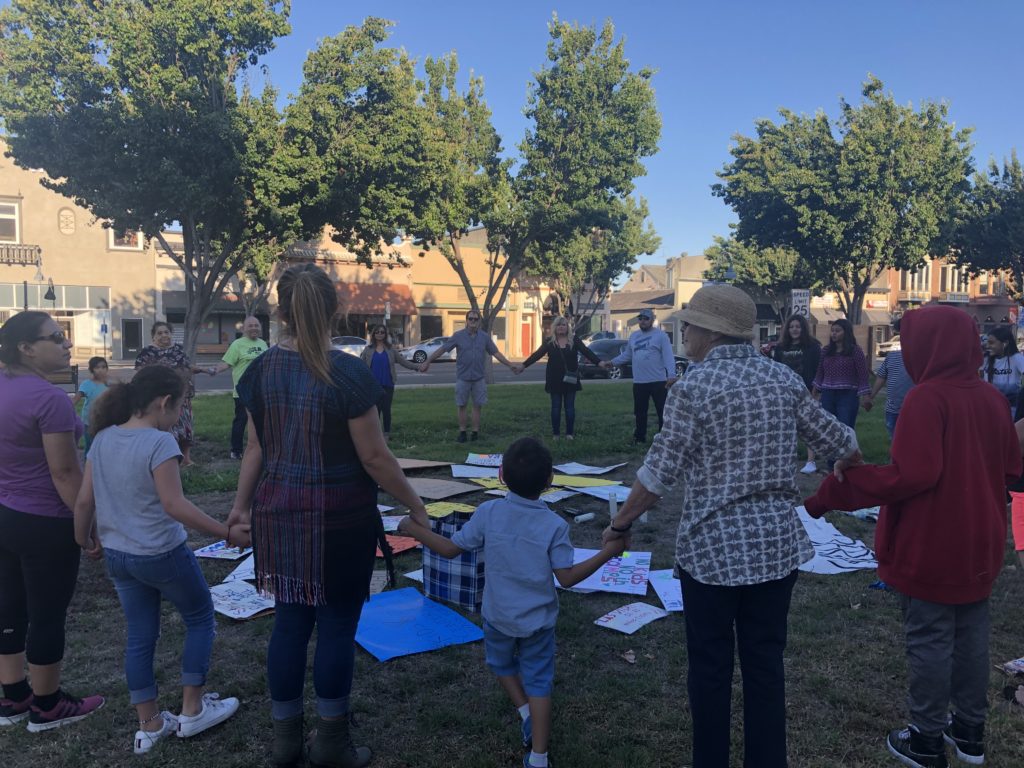 Adults and children form a circle around the signs they created for a July 26 demonstration. Photos by Melissa Melton.

About 30 San Benito County adults and children gathered July 26 to protest the treatment of immigrants at detention centers along the southern U.S. border. Lined across the corner of Fourth and San Benito streets in Hollister, they raised their signs as passing motorists honked their horns in solidarity.

The demonstration opened with a candlelight vigil in which participants joined hands in prayer, then repeated the names of the seven children who have died while in U.S. immigration custody this year.

The Office of Inspector General reported on July 2 that border patrol facilities in Texas’s Rio Grande Valley were dangerously overcrowded, and that detainees did not have adequate bed space or easy access to a change of clothes. The report also said that most single adults in Customs and Border Protection custody did not have access to showers, with some having waited as long as a month.

A border patrol station in Clint, Texas, has been at the center of national discussion following reported outbreaks of scabies, shingles and chickenpox.

Hollister resident Susanna Langstaff, who works as a resource specialist at Anzar High School, organized the demonstration after feeling “empowered” by the July 12 Lights for Liberty protest in San Juan Bautista.

“We are here because the inhumane treatment of people in detention centers is not what we stand for and is against American civil liberties,” Langstaff said. “We can stand up against [Immigration Customs and Enforcement], speak up against racist language, and raise awareness about how many families are being separated.”

Langstaff’s mother Jeannette attended to support both her daughter and the cause.

“We have to treat all people equally and humanely and learn why they’re coming over to save their lives,” Jeanette said. “We need to walk in other people’s shoes . . . They haven’t committed a crime. We would do the same if in our country we couldn’t make a living or we were unsafe.”

Among the attendees were 14-year-old activists Maritza Monroy and Marlene Garcia.

“I’m happy we’re supporting all the kids who are in need,” Monroy said.

“I really love the love and support we’re getting from the people honking,” Garcia added. “I hope we are spreading awareness to people who don’t know about the situation.”

Many of the attendees at the demonstration were parents of young children.

In January, a U.S. Department of Health and Human Services brief claimed that a June 2018 Federal District Court order identified nearly 3,000 children who had been separated from a parent or guardian by immigration authorities.

Rodrigo Jimenez, a father of three, attended the demonstration with his wife and their children.

“This is not a left- or a right-wing issue; it’s a human rights issue that we shouldn’t have to fight over,” he said. “I have three kids. I wouldn’t want to be separated from them.”

Another protester, Pamela Witherspoon, said, “If these were children with white skin and blue eyes, this would never be happening. This is not the America I know and love.”

At 7 p.m. the protesters laid their signs on the lawn and gathered in a circle to conclude the demonstration with Cesar Chavez’s “¡Si Se Puede!” chant and the unity clap. Participants chanted and clapped in rhythm as the tempo gradually increased, reaching a crescendo.

This was the first vigil and demonstration organized by Langstaff, and she said she was pleased with the turnout. She hopes to attract a larger group in the future.

“We are connecting our hearts to our power,” said Langstaff. “We want to make all the difference that we can. It may not seem big, but it matters.”