Officers assisted with security and searching perimeter of the festival. 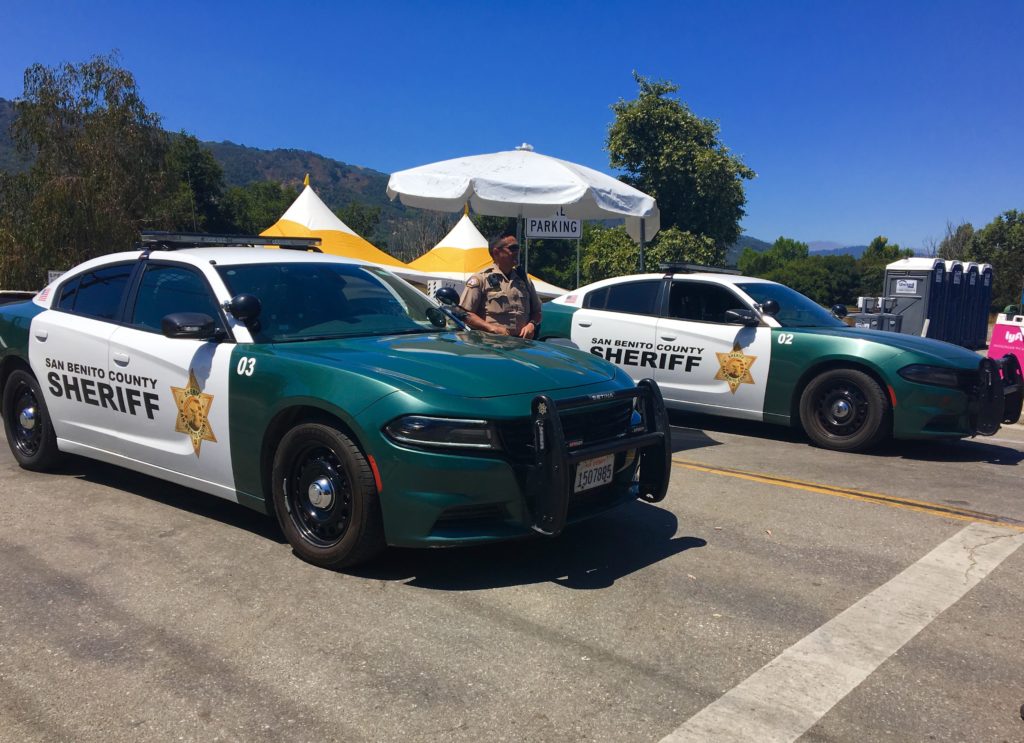 Within minutes of the Gilroy Garlic Festival shooting on July 28, the call for help went out to law enforcement agencies outside Gilroy, including the San Benito County Sheriff’s Office. Capt. Eric Taylor spoke with BenitoLink about that night, when a 19-year-old shooter killed three people and wounded 12 others.

Taylor said two shifts of San Benito County deputies were switching as the call came in. That proved to be a good thing because the oncoming shift was geared up and ready to go, and the current shift hadn’t broken down their gear yet.

“Because of that we were able to send four deputies—Mike Mull, Breyon Canez, Luis Espejo, and Matt Avilla—immediately when the call for help came out from Gilroy,” Taylor said. “We sent two guys from the current shift and two from the oncoming shift, and they responded together.”

Taylor said it is believed the San Benito County deputies were the first responders from outside of Gilroy who were not already working overtime at the event.

“When they knew they had an active shooter, Gilroy put out kind of an S.O.S. for everybody to respond,” he said. “Luckily, we’re on the north side of the county and with lights and sirens we had a clear shot at getting to Christmas Hill Park in Gilroy in minutes. At that time, the [shooting] event was still ongoing.”

Upon arrival, deputies Avilla and Espejo went into the festival grounds and encountered a shooting victim.

“He was in the back of a pickup truck where medics were working on him,” Taylor said. “They provided armed security for the medics as they worked on the male. He ended up not surviving. They stood by as security until the coroner was able to come.”

Four more deputies arrived July 29, with two working security on the north side of Christmas Hill Park. Two more deputies were sent July 30 in order to control access to the main entrance of the park.

From what he knows about the Gilroy Police Department, Taylor said the response to the shooter went down exactly as they were trained to do.

“For years, Gilroy PD has staffed that event in a vigilant manner,” Taylor said. “They’ve kept that a family event that has a lot of law enforcement, but it doesn’t feel like you’re in a police state while you’re there. Based on accounts from officers involved there, and what the gunman was trying to do, had those officers not neutralized the threat when they did, the count of injured and dead would have been astronomical.”

Taylor said Gilroy officers did not hesitate to engage the shooter. The Gilroy Police Department later said that the shooter took his own life after being shot by officers.

“It was a team of three of them who engaged him,” Taylor said.

Lessons learned will come out later during debriefings, he said, but some things did go right, despite the loss of life.

“It’s hard to talk in terms of ‘it could have been worse,’ because what happened is as bad as it can get, especially when losing children,” Taylor said. “But a lot of things went right. Not only were the officers able to engage and stop the shooter very quickly, but they have [historically] had a very large contingent of firefighters, ambulances, paramedics and EMTs… Just like the cops saved lives by stopping the shooter, the medics saved lives by being there tending to the people.”

Locally, Taylor said law enforcement leaders will be coming together to discuss how to respond during large events, such as concerts, rodeos, farmers markets, street festivals, and motorcycle rallies.

“The community allows us to police them and we need to work with the community to figure out what is going to be acceptable to make everybody feel safe, but still be able to do things without feeling we have a contingent of militaristic personnel watching over them,” Taylor said. “At the same time, we have to have the ability to respond to these threats that even though they seem more prevalent, they are still an anomaly when these things happen.”

He said there’s a delicate balance between underreacting and overreacting.

“That’s a very serious conversation we’re going to have to have because we’re going to have large events at the high school with the huge, new stadium,” he said. “There’s a lot of things we need to think about for security and what’s going to be accessible for the people in San Benito County.”

Even though Gilroy officials appear to have done everything possible to keep the event safe, Taylor said no public gathering can be 100% safe. He added that sometimes it still comes down to people saying something if they see something suspicious.

“At least give us a heads-up so we can talk to that person,” he said, adding that people shouldn’t go through life paranoid. “Have a plan. Where are you going to reunite with your family if you get separated? Teach your family to be vigilant. Watch your surroundings and have a place to go. It’s no different if someone produces a firearm downtown or it’s an earthquake and buildings start falling. It’s incidents like this that make us have to go back and check in with our families and friends to say ‘if something happens, this is what you do.”

BenitoLink reached out to city leaders in Hollister and San Juan Bautista regarding the aftermath of the Gilroy Garlic Festival shooting. Hollister City Manager Bill Avera said even though he has participated in numerous motorcycle rallies, he still doesn’t know much about security efforts because “most of that was kept top secret.”

“My greatest concern with the rally has never been with an active shooter,” Avera said. “Mine has always been with an attack similar to the Boston Marathon incident. If you think about the attendance of the rally compared to the street festival, clearly it’s different and the manpower requirements are much different.”

The San Juan Bautista City Council plans to discuss how the city addresses security at their events at an upcoming meeting on Aug. 20. They hope a representative from the San Benito County Sheriff’s Office will be able to give a brief presentation.

Councilman Dan De Vries took to Facebook after the shooting and said the community needs to begin a conversation in regards to safety and security at the city’s events. He told BenitoLink that he has gotten several suggestions from the public via social media that include spreading vendors out during events so the public is not shoulder-to-shoulder, more police presence and having volunteers walk through the events looking for suspicious activity.

However, De Vries said that there is no amount of precaution that an organizer can take to “prevent a psychopath from inflicting harm.” Despite that, he said the city still needs to hear from security experts on how San Juan Bautista can be better prepared.

“We have an obligation to the public and to the visitors to make sure we have thought about it and are careful and have implemented safety precautions,” De Vries said.

San Juan Bautista Mayor Cesar Flores said other than fencing the town off and setting up metal detectors, he doesn’t see a viable solution, which is why he also wants the city to discuss it.

De Vries and Councilman John Freeman also considered fencing in the town during events, but said it’s not practical. Freeman said because the street events are wide open to the public, it faces different security challenges. In particular, he said since city events are large they cannot be relocated to a local park. Though the city requires promoters to contract security, they aren’t allowed to carry guns, he said. Aside from increasing law enforcement presence, he said the city needs to come together to brainstorm.