Author defends his study after Botelho calls it flawed. 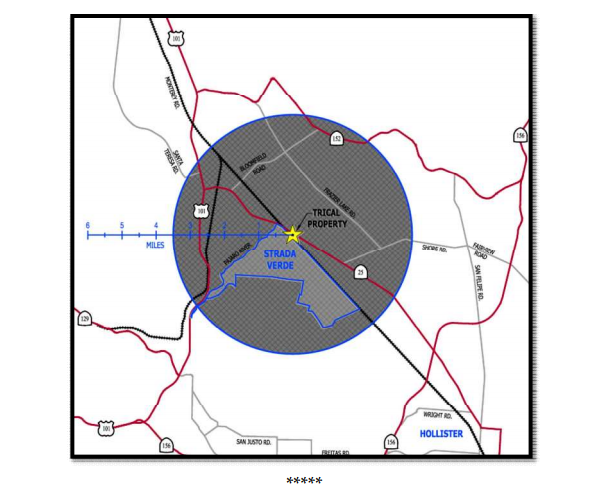 The recommended 3.5-mile buffer around Trical, Inc. in relation to the proposed Strada Verde project. Image from impact report.
×

The author of a hazard study that concluded the Strada Verde project is unsuited for the proposed location defended its validity at the Aug. 4 meeting of the San Benito County Board of Supervisors.

The study recommends a minimum 3.5-mile development buffer zone from the Trical, Inc. premises. Trical is a distributor and applicator of agricultural fumigants, and the project is located within the recommended buffer zone.

The Strada Verde Innovation Park, proposed near Highways 25 and 101 along the Pajaro River, would encompass 2,777 acres, including open land with a 2.4-mile trail; a business center with a hotel, retail shops and restaurants; and an automotive technology and research center with automobile testing tracks.

The fate of the proposed development will be decided by county voters. Project proponents collected enough signatures to place an initiative before the Board of Supervisors, who then voted to place it on the November 3 ballot.

Before Ranajit Sahu—an environmental, mechanical and chemical engineer hired by consultant EMC Planning Group to write the report—presented to the board, Supervisor Anthony Botelho gave a six-minute speech in which he called the report flawed, based on unmerited assumptions to support a predetermined conclusion. He also said there is a “prejudice” in that the county’s Resource Management Agency Director Harry Mavrogenes is against the project.

“I find it interesting that the report does not take into account the safety measures that are in place at Trical for over 40 years that have prevented any accidents,” Botelho said.

In response, Sahu said he visited Trical, located on Highway 25 just east of the northern county line. He said he discussed their operations and applied widely used models to come up with consequences for “reasonable worst-case scenarios.”

“The recommendation is a minimum of 3.5 miles, would be a safe, an appropriate and prudent buffer zone for this set of chemical hazards that are present there,” Sahu said. “Again, at a facility that is perfectly in compliance to current requirements.”

The report describes Trical as a chemical storage and blending facility used for agriculture.

Sahu said, “I had no idea what the outcome would be until the modeling was done, until we looked at the different sensitivities of the different tanks, what that would be. To suggest otherwise is a falsehood and frankly inappropriate.”

He also said the report does not address safety measures in response to small, manageable hazards because Trical has a mitigation plan that can address those. The report, Sahu added, analyzes worst-case, unforseen scenarios that Trical and other similar companies that deal with hazardous chemicals cannot mitigate.

Based on those report findings, Botelho and Supervisor Mark Medina asked if any human activity such as farming and driving on Highway 25 was appropriate within the recommended buffer zone.

Sahu said existing land uses need to be rethought. As for farming, he said the report did not analyze current land uses, but only the effects on the Strada Verde project which would increase human exposure to a potential chemical leak. He added that the lower density level of field work would allow workers to evacuate the area faster in case of a leak, explosion or other hazard. If the Strada Verde project were built and a similar situation occurred, Sahu said thousands of people would have a much harder time evacuating and would be exposed to hazardous chemicals for a longer period of time.

“It has a lot of sensitive land uses,” Sahu said about the proposed project. “The test track is one of them, but it included everything from religious facilities to daycare centers to public spaces, meeting spaces so it had a lot of very flexible land uses and was not restricted to a race track.”

Mavrogenes told Benitolink the report was prepared by independent, world class experts in their field.

“I gave the consultants no direction as to the outcome or results,” Mavrogenes said. “To suggest otherwise is outrageous. My main concern is always that we do not put people in harm’s way.”

While most members of the public in attendance urged supervisors to take the report seriously and avoid any development within the recommended buffer zone, Trical President Paul Niday said the site was safe.

“The report contains many comments, examples and a modeling methodology that are not applicable to our operations,” Niday said. “Our property is and always has been safe, secure and beneficial to the community.”

Michael Groves with EMC Planning, who was contracted in November to conduct the study, said the county had created a 2.5-mile buffer zone around Trical based on the company’s risk management plan when they adopted the 2015 General Plan update. However, the buffer zone was changed to a case-by-case scenario as a result of a lawsuit settlement (see attached pdf).

According to county records, Trical, the county, and Rancho Gavilan—which owned the 2,777 acres where the Strada Verde project is proposed—settled in May 2016.